A Gay Breakthrough at the Guthrie: ‘Skiing on Broken Glass’ Is Daring & Unafraid To Challenge Righteous Assumptions 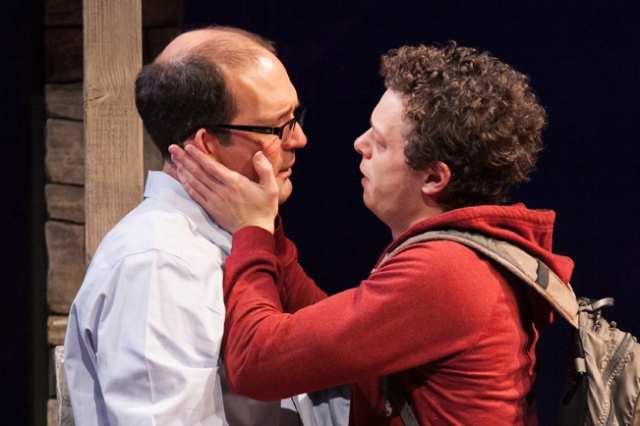 In 2010 the one act, two character version of Skiiing on Broken Glass by David Goldstein was a critical and box office hit at the Minnesota Fringe Festival. The story of a young sex worker in his early 20s and a grieving middle-aged man struck a nerve. It showed that audiences were not only interested in gay-themed plays with palatable political messages around same-sex marriage, military acceptance, and bullying, but that they could handle plays that really probed the nuanced problems of relationships and libido differences. The expanded Guthrie Theater staging at the Dowling Studio, directed by the theater’s Artistic Director, Joe Dowling, is an even richer experience than the original.

When successful writer, Mark (Michael Booth), first picks up Todd (David Darrow) he finds the experience to be unexpectedly expensive. It’s as if every action, sexual or not, has been itemized. However, their initial meeting is more like a date, or an (almost) platonic craigslist encounter, not the quickie one might expect from such an interaction. However, in a brief amount of time the two men learn more about each other than many married people do after decades of life together.

Todd’s upbringing has been one of rejection and stigma, which has propelled him into a chaotic hand-to-mouth existence. He justifies keeping tabs on every action that happens, hence he has turned himself into a commodity. That said, doesn’t employment that does not include sexual activity do the same?

Mark is emotionally stuck and celibate years after his partner was killled in an accident . The photo of the deceased in his gorgeous living room (sleekly designed by Michael Hoover) bears an uncanny resemblance to Todd.

Of course, the situation can obviously be seen as exploitation on Todd’s part and certainly many will swiftly make Mark the exploiter and trusty ‘moderates’ will call it mutual exploitaiton. The term ‘boy toy’ is used – a way of trivializing a far more layered relationship which the actors probe courageously. Within all this, there is also the kneejerk reductivist assumption that Mark is going through the proverbial male midlife crisis. But of course, those are all handy deflective cliches that don’t get beneath the service. Like it or not, there is a soul connection present. 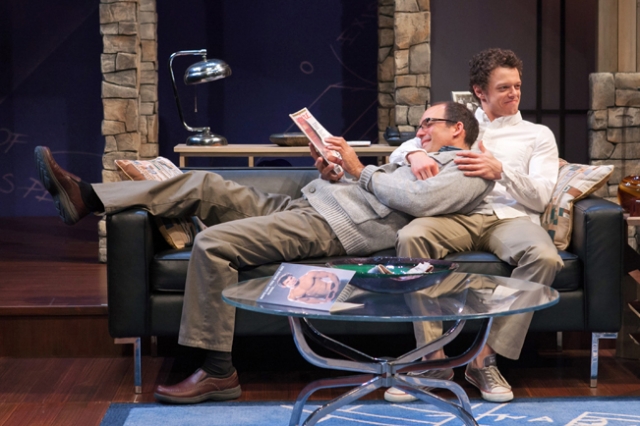 This is where Joe Dowling’s superb direction comes in. He has guided the actors into a sort of psychic wavelength wherein we sense that destiny, source, God, whatever, have flung them together. Bourgeois American notions about intergenerational adult love and being scandalized that one partner has had multiple sex partners are refreshingly swept aside and the vibrations that brought these men together are numinously realized. Booth’s gentle and loving portrayal contrasted with Darrow’s raw portrayal make for some of the most exciting chemistry between two actors seen on a local stage in recent years.

In developing this full length production out of what was a two-hander, Goldstein has added two characters against which the audience can gauge just how feasible the male relationship really is. Michelle O’Neill as Edith, Mark’s longtime gal pal, and Bill McCallum as Thomas, her financier fiance, weigh harsh judgements against the male couple in brashly different ways that are simply fascinating and enraging at the same time. It would be a spoiler to go into this here. But it can be said that the men have scrupulously faced one another on practical and intimate -not just erotic- levels. In contrast, the male/female couple, played with dark crackling vibrancy by O’Neill and McCallum, for all their sophistication, are emotionally illiterate. We know that marriage for them will be one of self-deception and deception. But with the two men, everything is on the table.

I don’t think/feel Goldstein means at all to deride straight folks. Hypocrisy knows no sexual orientation, race, or gender. Indeed, one can see many a gay or lesbian couple asserting the same value judgements, which society in general applies to intergenerational and sexually less limited relationships. Maybe, that could be part of  a further expansion of what’s an already terrific play.

Indeed, the only problem I had with the Guthrie expansion was that the ending comes too abruptly. There’s a missing piece or two that still need to preceed. Nonetheless, Skiing on Broken Glass is a gutsy and passionate theatrical experience.