A Bright and Shiny Book of Mormon 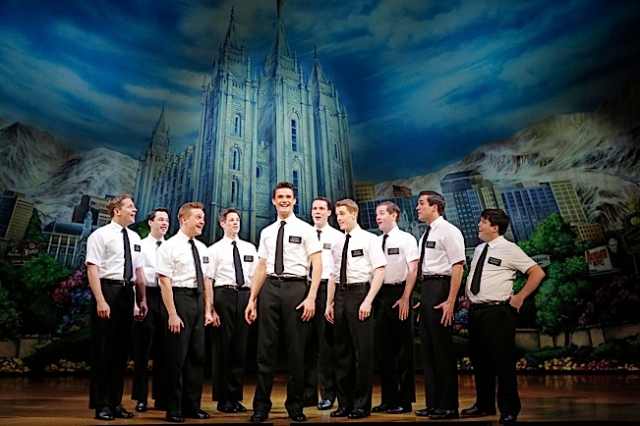 Strong production values, sharp comic timing, and precise choreography make The Book of Mormon a bright and shiny spoof on Mormon missionaries and Ugandan villagers – two groups most Americans actually know little about. In 2008 we were treated to months of rants about Reverend Jeremiah Wright and Democratic candidate Barack Obama. In stark contrast, it was revealing that we heard comparatively precious little about the far more mysterious religious tradition followed by Republican candidate Mitt Romney in 2012. Though the national tour of Mormon won’t tell you much more about the religion’s roots than its entertaining spoof segments on alleged Mormon history, it reminds us just how outlandish any number of religions can actually seem when looked at from a detached vantage point. Those segments reminded me of those Bible picture books my sisters and I would peruse at the doctor’s office waiting room when we were kids.

The Book of Mormon‘s book, music, and lyrics are attributed to South Park creators Trey Parker and Matt Stone and Avenue Q co-creator Robert Lopez. The musical’s cartoon approach of zingers, running gags, and terms and phrases that amount to gags is automated by two young Mormon missionaries who must stay by each other’s side at all times. Elder Price (a charming Mark Evans) is a handsome twit who snaps into ecstatic manic mugging throughout the production so that we always understand he’s an airhead with a ego-maniacal messiah complex. The audience absolutely adored the mugging conceit the night I saw it. 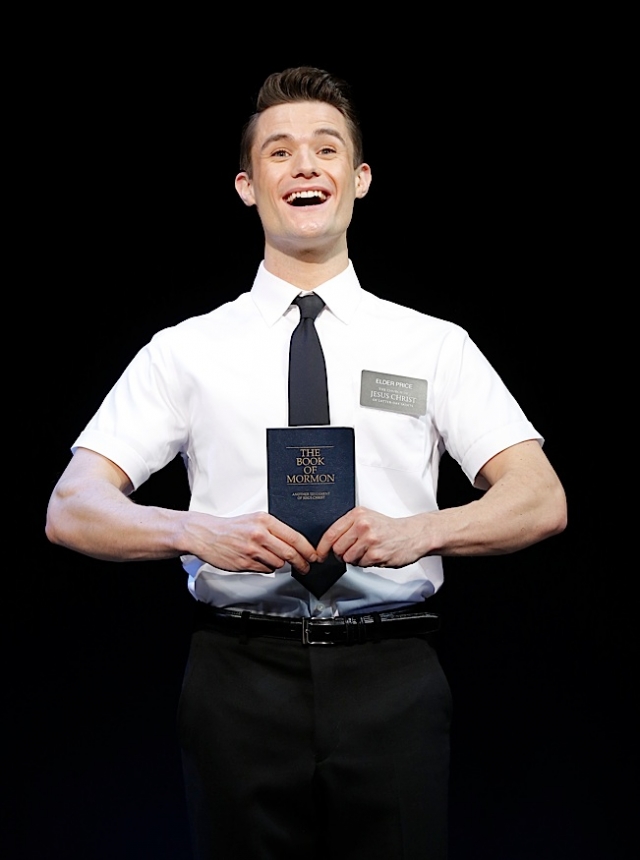 Indeed, Price’s wide-eyed zeal brings to mind Mitt Romney’s more unguarded moments which may possibly account for some of the show’s subliminal comic power during the election season during which the show was selling out. Given that it’s the Broadway production’s national tour it’s certain that Price’s take is quite similar to what actor Andrew Rannels originated in New York.

Price’s bumbling sidekick, Elder Cunningham (a charmingly goofy Christopher John O’Neill), is low on self-esteem, motivation, and maturity. He thinks he lacks the skills and smarts to be an effective missionary, yet he transforms into an effective, though unwittingly blasphemous, converter of the ‘heathen’. To get the villagers interested in Mormonism he mashes up improvised stories inspired by Star Trek, Star Wars, and Mormon history lore, hence, creating an instant myth for the Ugandans to latch onto. This culminates in a minstrel show the villagers, complete with long black penis tube pieces, present to Mormon leaders sent by Salt Lake City central headquarters. Obviously, these predictably stuffy white men are scandalized. 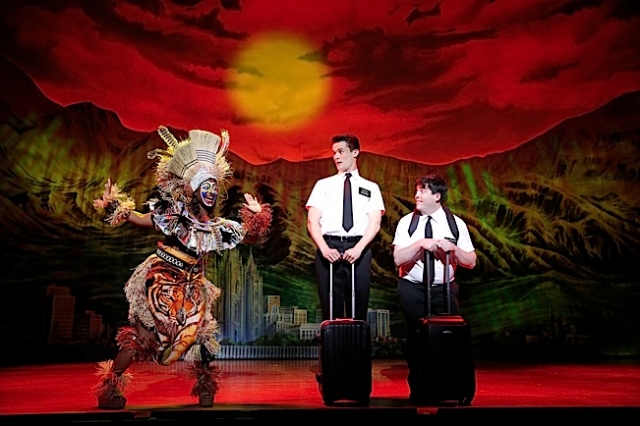 As with Tarantino, pre-Inglorious Bastards, Parker, Stone, and Lopez milk laughs gleaned from real human suffering. No play or musical in Broadway history, or at least since the vaudeville era, has likely ever had so much snark, so many cheap shots, and so many stand up comedy-style moments as The Book of Mormon. The show is jam-packed with off-the-cuff jokes about brutally enforced genital mutilation of women and AIDS. One villager makes recurring references to having sex with babies (which of course is rape) and the village doctor often refrains with the complaint he has maggots in his scrotum. Laugh-O-Rama! 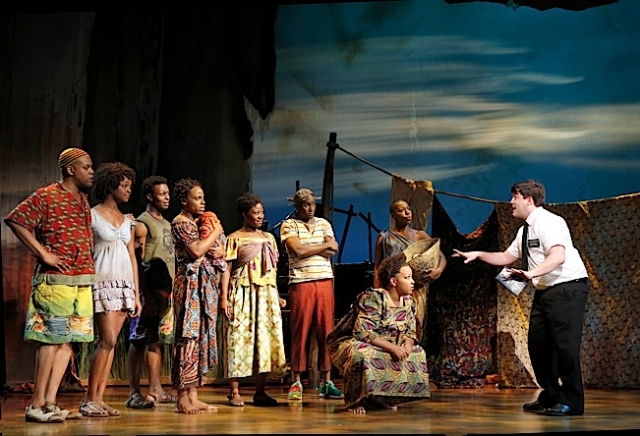 But what the Mormon creators have made especially benign is the character of the warlord. Warlords in various African countries, sometimes in the employ of religious interests, Westerners, the Chinese, and multinational corporations, do nasty things like cutting off people’s hands and mutilating the pelvises of women. Whenever they shove something up the rectum of a man, woman, or child, it’s not something the victim will easily, if ever, recover from.

But then, the authors have no interest in getting beyond a simple story that jeers at empty-headed goody-two-shoes Mormons and Ugandans who talk with thick moronic accents. But it’s hot boxoffice and cleverly brings liberals who love to sneer at Mormons (who are essentially stand ins for all puritanical white people) and right wingers who love to sneer at black foreigners together. Broadway unites us all.

In reality The Church of Jesus Christ of Latter Day Saints is quite controversial with its institutionalized secrecy, its supposed control over followers, its sexual repression, and its vast economic and political power. The show does bring up how black people were considered inferior by the Mormon Church until the 1970s, though it does not elaborate. As someone who grew up where Mormonism is more common than in Minnesota, I can say that it’s a force to be reckoned with. Though slight, Tony Kushner’s attention to Mormonism in Angels in America gives a clearer sense of the religion’s essence. But to be fair, that’s not what Lopez, Parker, and Stone are interested in.

Moreover, it is common knowledge that California’s antigay Prop 8 was campaigned against formidably by Salt Lake City. It would take a much more committed writing team to really delve into hidden Mormon infrastructure and shape a spoof that really gets beneath the surface. In contrast, C. Jay Cox’s 2003 film, Latter Days, actually illuminates the psychology of Mormon missionaries, the unique pressures they face, and the homophobia they’re imbued with. The film, though gay-sensitive, is also scathingly critical of out gays who trivialize Mormonism. 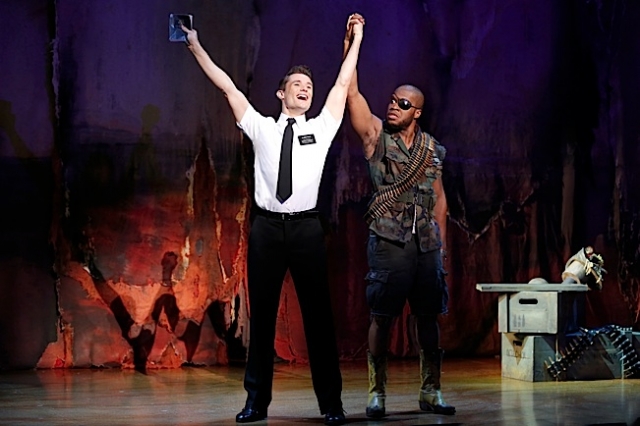 The Book of Mormon musical is also puzzlingly devoid of any mention of the Ugandan government’s years long connection with white US evangelicals and George W. Bush’s PEPFAR legacy, and their successful efforts to ban glbt people from housing and employment, as well as their hauntingly recurring campaigns to officially assign the death penalty to gays and lesbians. ‘Corrective’ rape to turn gay women straight is a practice that is actually taken seriously. An absurdly horrific concept on a par that having sex with a baby will cure you of AIDS. Lavender’s Uganda: An Overview series from last year looks into this connection in detail.

Parker, who directed the musical, gets solid results from the MTV-style choreography by Casey Nicholaw. Pre-eminent and King-maker New York Times theater critic, Ben Brantley called The Book of Mormon the greatest musical of this century. In so doing, he ratified the idea of Comedy Central as the new gold standard for musical theater. Thornton Wilder, Neil Simon, Wendy Wasserstein, and in some cases, Tennessee Williams, move over. I’m not necessarily saying this is right or wrong. It just that – how does that overused current cliche go? ‘It is what it is.”