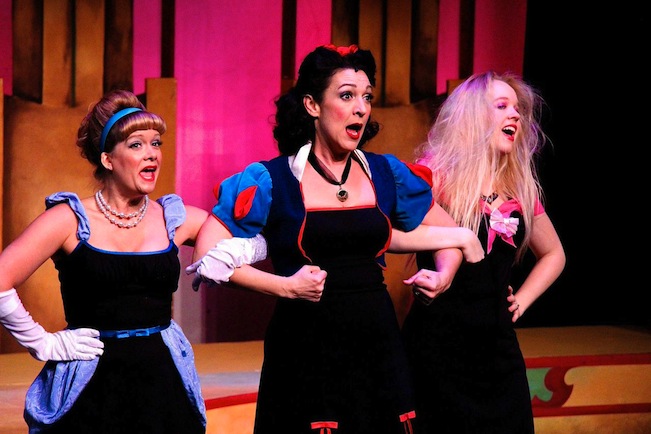 Poisoned apples. Glass slippers. Who needs ‘em?! Not Snow White and her posse of disenchanted princesses in the new musical comedy that’s anything but Grimm. Forget the princesses you think you know. These royal renegades toss off their tiaras to bring their hilariously subversive, not-for-the-kiddies musical to the stage. The princesses are none too happy with the exploitation they’ve suffered in today’s films, books and merchandise.

Portraying the role of Snow White, Jen Burleigh-Bentz leads a cast that brings issues of feminism, racial diversity and stereotypes, and sexuality to the forefront of the conversation in a humorous and in-your-face manner that seems highly effective. 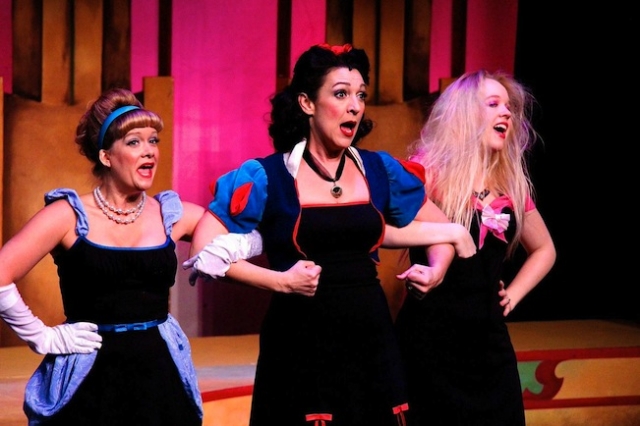 Why did you choose to get involved with this project that is debunking the stereotypes of Disney princesses?
JB: I think there are many answers to that question that I could divulge, but I don’t know if I want to go into my Disney history. Seriously, I grew up loving Disney and enjoying the movies and loving fairy tales and, as an adult, of course we all realize that fairy tales are just that: neither legend nor lore, just stories. However, we do live in a social culture that allows children to think that what they need to achieve is at a fairy tale status. Perfection. Whether it’s Disney or Laura Croft or Hollywood in general, or perhaps the stars that perpetuate perfect body types by continuously “upgrading” their bodies, our kids are supposed to be perfect, at least I think that that’s what they are brought up to believe from what they’re being fed at home through TV and movies, video games, etc.

I really love the fact that every night I’m doing a show that is amazingly funny, and actually real at moments. It has an interior message that I think everybody pretty much gets without knocking people over the head with staunch finger pointing or denigration of any one group. It’s really a message that is speaking to everybody saying, “Hey, come on y’all, let’s be real!”

Do you think audiences will be surprised by anything in the show? For example, (spoiler alert!) a possible lesbian connection between two of them?!
JB: I love the fact that when the show pushes the boundaries, it does it in a funny and lovable way, and I love the fact that the audience will be thrown for a loop in a couple of situations that are not typical fairy tale situations, but more real life situations like loving who you love, regardless of who they are and what their gender is! Your readers will have to come to the show to see what that means!

Why do you think this show resonates so well with audiences? There was nonstop smiling!
JB: There’s this misconception that we have as a people here in the United States, that men don’t know as much about fairy tales and Disney movies as women do. I think that that is proven to be wrong in the case of the show—the men are laughing at the same things that the women are laughing at! The more “mature” adults are laughing at the same things that the teenagers are laughing at, the conservatives and liberals are like the lion and the lamb, laughing together! Dennis Giacino (the writer) has done a wonderful job of drawing everyone into this show, he’s helped us to laugh at ourselves and laugh at situations in a way that I’ve not seen achieved all that often on the musical theatre stage. There’s something about making people laugh in this business that makes all of the hard work that we actors go through worthwhile, which is one of the reasons why we ladies feel so lucky to be a part of this particular show. The smiles go a long way, but the belly laughs make our hearts tingle! 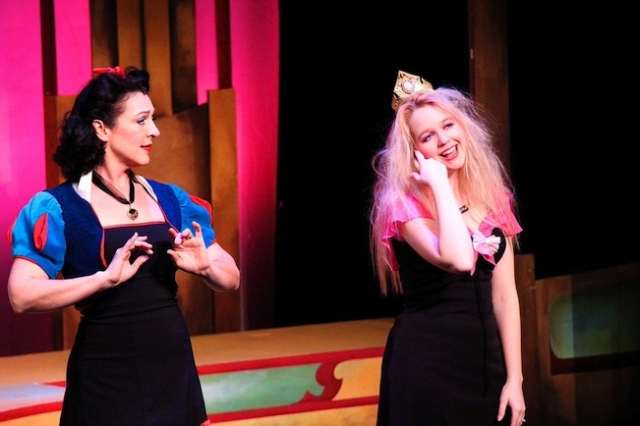 What’s it like taking on the role of such a beloved children’s character as Snow White, and spicing her up a bit?
JB: Being Snow White in this show is so incredibly easy because, truly, most people have an affinity for the sweetness of the character. Most people have a little bit of love for her, no matter how lame her story might have been. But being able to immediately, upon setting a foot onto the stage, let everyone know that this is not the Snow White who sat around and sang “Someday My Prince Will Come,” but the Snow White that whipped those seven little men into shape…that’s amazing. Powerful. For whatever reason, the audience seems to take that big personality change in perfect stride!

Are you anything like your saucier version of Snow White? What do you envy about her?
JB: I think if you asked my employees at my music store if I’m anything like this Snow White, they MIGHT say that perhaps I’m slightly bossy like she is… but the one thing that I do really admire about this Snow White is that she has a razor sharp sense of humor, she has goals, she obviously has some pretty good friendships going for her, but throughout all of the organizing of events and whipping people into shape that she does, she is still able to grow. She is able to see that she still needs to grow—that where we are and who we have become as a people, as a society is no one person’s nor no one faction’s fault, it’s on all of our shoulders, and we need to grow past it. That’s admirable. I admire that about her.

Disenchanted! runs at the Illusion Theater until November 23. For more information and to purchase tickets, head to www.illusiontheater.org.