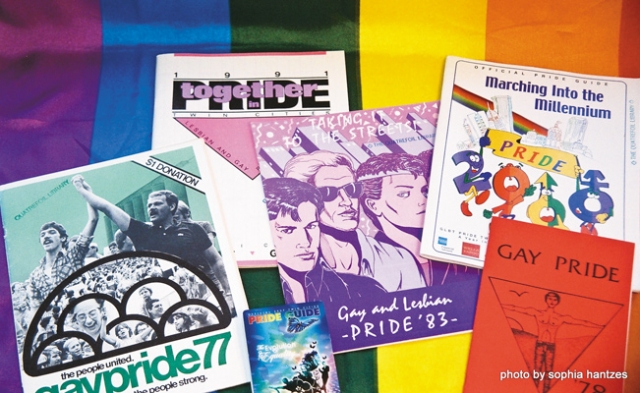 Pride programs and guides throughout history from Quatrefoil Library. Photo by Sophia Hantzes

Seven short sentences in the June 29, 1973, Minnesota Daily advertised the small gathering in Loring Park that celebrated the second annual Pride festival in the Twin Cities. Activities such as canoeing, softball, and a dance were planned “as gays and non-gays celebrate Gay Pride Week.” What began as a small and cautious picnic, rally, and march in 1972 has turned into one of the most anticipated weeks of the year for the GLBT community in the Twin Cities—what many of us consider to be the holiday of holidays which allows us to show our Pride in who we are and who we love.

George Holdgrafer, a former editor of the Pride Guides from 1988-1993 and founder, longtime writer, and former editor of Lavender Magazine, recognizes the importance of the connection between FREE and Stonewall in his 2009 article, “Free Before Stonewall.” He notes, “Minnesota can be enormously proud that our gay liberation movement, influenced by San Francisco and not New York, got underway six weeks before Stonewall. Unfortunately, a common misperception is that it was the other way around: Stonewall produced FREE. But we know better!” 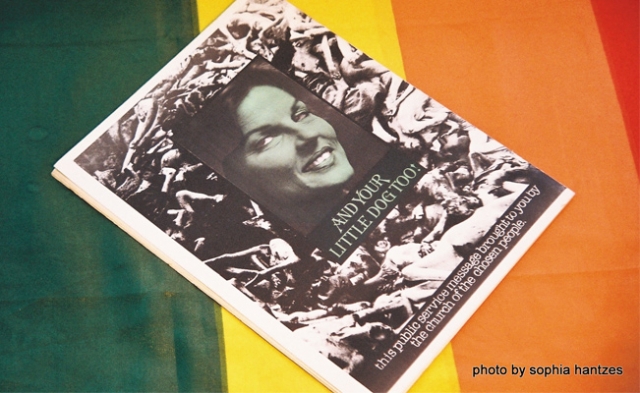 The back of 1977's Pride program featured Anita Bryant as the Wicked Witch of the West. Photo by Sophia Hantzes Pride Program from Quatrefoil Library.

Pride in the 1970s blossomed quickly, with more attendees present every year. In 1972, about 100 people were present, drawn to the event through word of mouth. 1973’s Pride was advertised by fliers that were designed to be folded up and disposed of quickly in the event of a police raid. Women became particularly active in the 1974 celebration, hosting activities, workshops, speeches, and a march specifically designed to celebrate lesbians. And in 1975, Pride began to more strongly emphasize the social aspect (as well as the political aspect) of the celebration with live music, free beer from Grainbelt Brewery, and free donuts from the Church of the Chosen People (Minnesota’s first gay, pagan church).  A 1975 photo caption found in the Jean Tretter Collection at the University of Minnesota describes the event, “about 250 people—many flaunting their gayness—gathered in Loring Park.”

1976 was a year filled with legal tension as the City Council attempted to abolish Gay Pride Day and replace it with “Human Dignity and Awareness Day.” With significant backlash and appeals from the GLBT community, however, the City Council was unable to suppress Gay Pride Day. The Minnesota Daily reported on September 28, 1976, that “Gay Pride Day survived, apparently because nobody could figure out what to do with it…The existence of a Gay Pride Day harms no one. We are providing an opportunity for members of a much maligned and misunderstood portion of the population to feel some semblance of dignity in themselves…Gay Pride Day will be celebrated in Minneapolis next year despite the efforts of Mayor Stencil to eliminate it and the City Council to camouflage it.”

1977 brought an extreme upsurge in political activism, when many Pride activities were created to show the GLBT community’s scorn for Anita Bryant, a public figure hell-bent on oppressing GLBT people with her “moral” warning against the dangers of the Gay Agenda. An “Anitalike” contest was held where contestants dressed up and acted like Bryant. The back of the 1977 Pride Guide featured a green-faced Bryant with the caption, “And your little dog too,” an obvious allusion to the Wicked Witch of the West. People marching in the parade joined together to sing a rendition of the Battle Hymn of the Republic: “We won’t go away Anita, even if you think we should. And we won’t go back in hiding, though you hoped and prayed we would. With your mind down in the gutter, you can’t see that gay is good. So kindly shut your mouth!”

The 1980s brought many changes to Pride, particularly involving a conflict between gays and lesbians. Lesbians felt particularly snubbed at the 1982 Pride festival when the use of the word “lesbian” was removed from most of the Pride materials. The Equal Time publication of June 2, 1982, notes that “One Gay Pride committee officer said lesbians ‘should have their own’ Pride Week observance.” According to George Holdgrafer, that is exactly what happened.  “Things climaxed, and there were actually two different Pride festivals. The men were in Loring Park, and the women were in Powderhorn Park.”

George Holdgrafer fondly recalls the 1983 Pride because it was his first Pride festival. “I had come out earlier in the year, and it was a tremendous experience for me. Never had I been with that many gay and lesbian people at one time.” Holdgrafer estimates that there were between 10,000 and 20,000 people at the festival.

Karen Hogan, a librarian and volunteer at Quatrefoil Library, remembers her first Twin Cities Pride because the 1985 festival was set to happen in Parade Stadium, requiring people to pay admission into the festival. “I remember going to an alternative Pride that was a bunch of lesbians in Powderhorn Park. We had our own Pride that year.” She also recalls a church on the parade route that positioned people to protest the parade. She says, “I was always kind of scared about that.” Most notably, though, she remembers when Pride threw a mass commitment ceremony in 2005. “My partner and I had been together for 10 years, and we were having a very bad day and a very bad year, and she still wanted to marry me. I still have our certificate on our dresser. My daughter asks why we can’t get married, and I tell her, ‘Well, we already are, kind of.’ It’s our placeholder until we actually can get married.”

Scott Breyfogle, the President of the Quatrefoil Library Board, stumbled upon his first Pride in by accident. “The parade was going down Blaisdell that year. I was in the closet still.” A couple of years later, Breyfogle went to his first real Pride event in Loring Park. But the Pride he remembers most was in 1997, when it was held on the riverbank. “I was with my boyfriend, and we were walking around enjoying the booze and free massages. All of a sudden, the sirens went off and we had to evacuate because of severe weather. By the time we got to our car, we were sopping wet.” 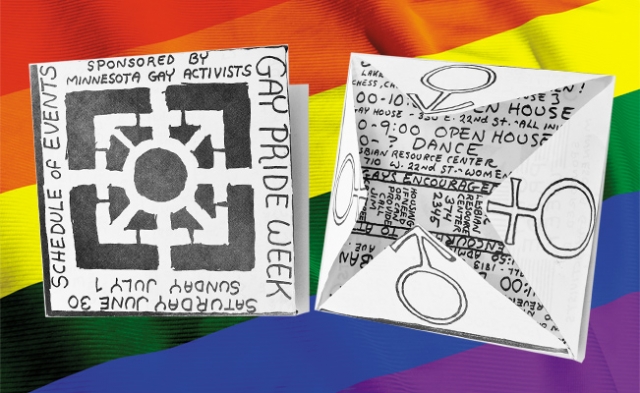 The first Pride flier was folded up to be easily concealed. From Jean Tretter collection at University of Minnesoata Libraries

Like most GLBT people, Pride holds a special place in Karen Hogan’s heart. “In college, I was pretty isolated, so Pride was the big celebration. It was like my Christmas and New Year’s all rolled into one. It was a time to see friends. It was a time to look at the cute girls. It was a time to feel like ‘yes, we have accomplished something’ or ‘no, we haven’t.’ You have your buddies behind you, and you weren’t alone. It was the one time of year where I could walk around and not feel like I was under siege or have to worry about getting queer-bashed. Or if I was, there were a lot of witness and people who would get my back.”

George Holdgrafer hopes that people don’t just see Pride as a corporate event. “It has evolved into a different animal. The emphasis now is more on corporate things. As it has grown larger, the whole grassroots aspect of Pride has changed into more of a business. With the marriage amendment looming in November, I think people should realize that it’s not simply a corporate event, but like in 1977 with Anita Bryant, it’s really something where we have a tremendous chance to achieve political gain.”

Karen Hogan hopes that people don’t lose sight of the true meaning of Pride. She says, “I want the history to be remembered and respected, just how scary and daring it really was in the early days. Now it’s fun, but the danger isn’t necessarily gone. Remember back to the first Pride. Remember what courage it took for those few college students to march down Nicollet Mall.”

So when you stroll hand-in-hand with your partner in Loring Park this year, or when you celebrate with drinks and friends at a local gay bar decked completely in rainbows, remember the small picnic in the northeast corner of Loring Park 40 years ago. Let’s not just celebrate love this year at Pride; let’s celebrate those first Pride participants who paved the way for the Minnesota GLBT movement. Let’s celebrate 40 years of history and memories,  40 years of laughter and tears. Let’s be proud of where we come from and where we’re going.

Special thanks to George Holdgrafer, Quatrefoil Library, and Lisa Vicoli from the Tretter Collection at the University of Minnesota.