20% Theatre Continues its Inquiry into the Complexity of Gender 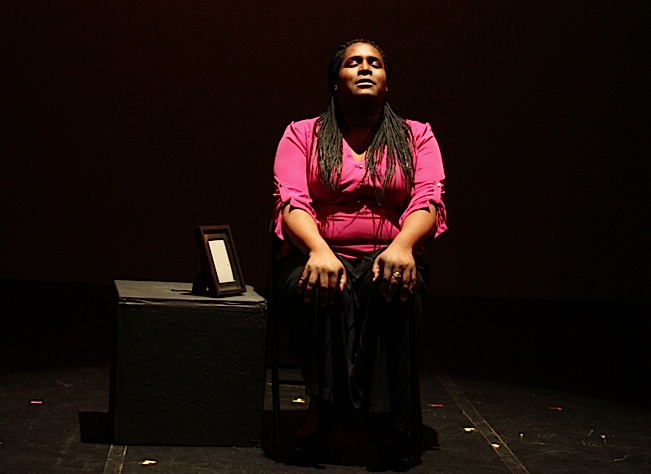 While so many in the gay, lesbian, and feminist communities have been focused on the legalistic and political, 20% Theater has been the region’s true pioneer into expanding definition(s) of the nature of gender. And if you think they are some marginal group, you are mistaken, if you consider that most of their performances play at or close to 100% capacity. 20 % tests the barometric pressure of how gender concepts and discourse have been evolving. Their work will definitely get your brain working, and probably, get your heart and passions working too.

20%’s current offering, The Naked I: Insides Out, is a terrific opportunity to tune into that discourse with 25 short stage pieces created by 20% artists.  So many different views are being presented, that you might call it an example of the democratization of performing arts. Here are some comments from some of those artists: 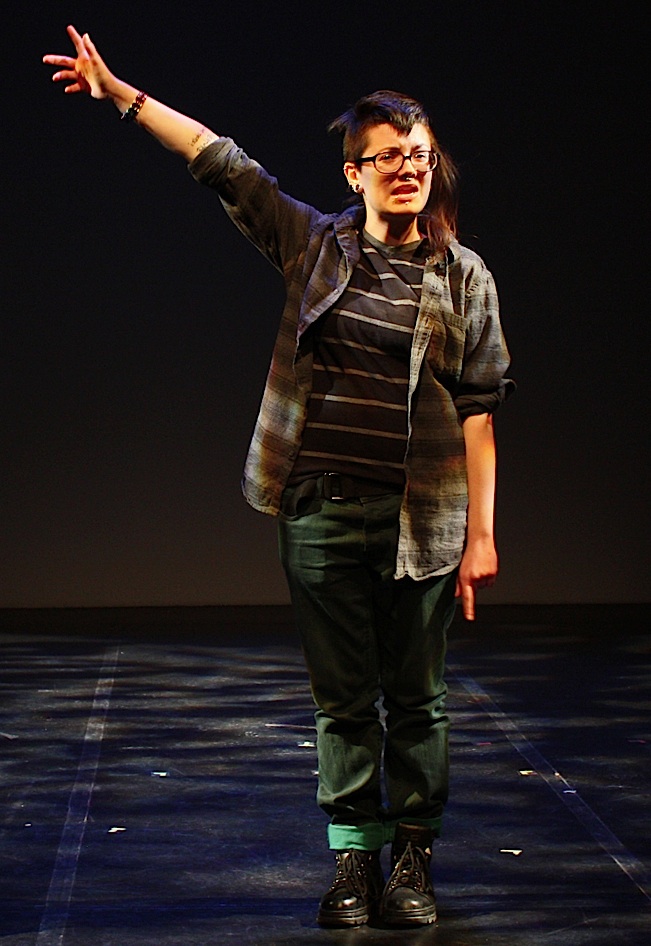 “The piece I wrote is about fear, shame, doubt, taboo and shared experience. My intention is to question some of the rules our communities have created about the right way to be a radical queer, trans, and/or disabled person. The things I reveal in this piece are things I’ve been carrying with me for a long time but have been afraid to share out of shame or fear that I’d be rejected by the communities that I count on for support. When I submitted this piece I hoped that sharing my “true things” might help me and others move past the shame and focus on building deeper, more authentic relationships with each other. My piece is very personal, but I’m not performing it. When I realized that I couldn’t fit it into my schedule to perform the piece myself I was very nervous about giving up that control and letting other people perform and direct the piece, but now I’m glad it worked out this way. The point of my piece is to break isolation. Sharing my piece with other artists is a very concrete way to start to do that. It is such an honor and a privilege to have such talented and committed artists bringing their voice to my words. The show preview is on my birthday and I feel like the actor and director of my piece, and the entire cast and crew are giving me the best gift I could ask for.” Director: Shannon McCarville; Performer: Jo Lum

I Shook is about the visible and tangible bodily reaction that comes with holding a secret and hiding a fundamental part of yourself. Suzi Gard (writer/performer) worked so hard to hide her identity that her body shook, telling her to be true to herself. She shook herself to celebrating her whole self. The piece’s intention is to connect with others that may be hiding the significant parts of themselves. Suzi and I hope that this piece will inspire people to shake out the secret part of themselves, that they should instead be celebrating.” Writer/Performer: Suzi Gard

“Upside-Down, Inside-Out is a very personal piece about assumptions that people often make about trans* bodies. Most people assume that trans people have had “the surgery” and that a masculine-presenting person has a penis, and a feminine-presenting person has a vagina. This piece turns this idea “upside-down.” If you have a penis, you could be man and woman, either, neither, sometimes one, sometimes the other, or someone else entirely. It seems to me that children are able to grasp this idea more easily than adults. When I come out to my five-year-old grandson as a woman with a transsexual history, I will tell him “Some boys have vaginas and some girls have penises, and he will understand.” Director: Cat Hammond 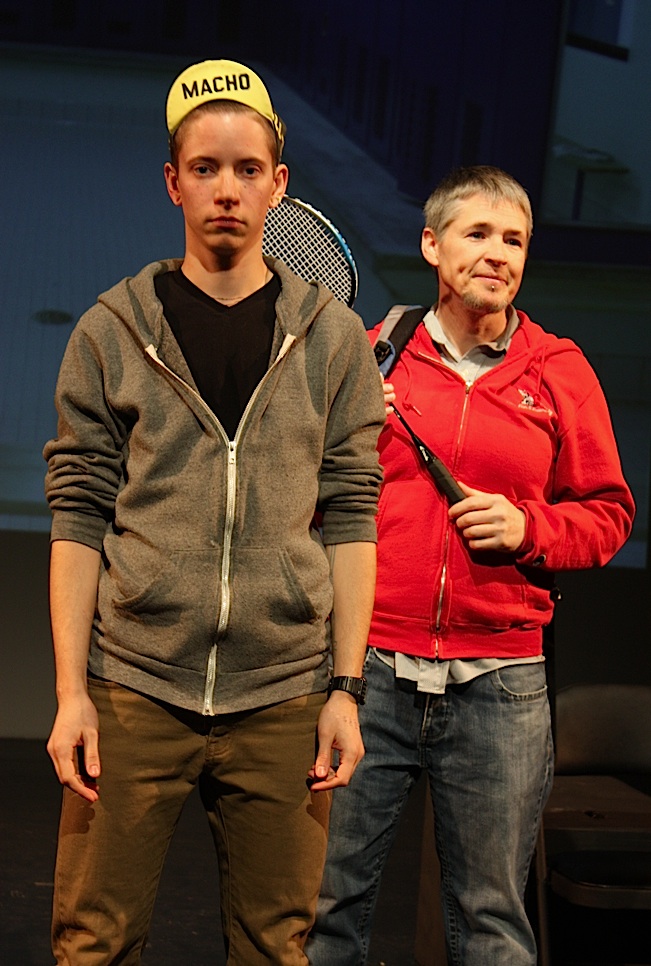 “Hello my name is “Femme”, I am the writer behind the advice blog “Dear Butch, Love Femme”. My piece in The Naked I: Insides Out is based off an interaction I had with a close friend of mine. During a casual conversation she mentioned that the woman she had slept with the night before looked like a “regular lesbian”, which caused me to ask what a “regular lesbian” looks like. She proceeded to describe a stereotypical lesbian (short hair, plaid shirt, lean build) and told me I could do better to look like one. As a femme lesbian, I was infuriated. Non-butch lesbians, like myself, are often questioned on their sexual orientation based off of dress alone. My piece is a reaction to this stereotype, infused with sarcasm and frustration. My “breed” of lesbian is rarely examined past the lipstick and high heels, we are seen as an accessory piece to a “regular lesbian”. As a writer I hope to open up the minds of my readers and see femmes as more then (well moisturized) skin deep. The femme voice is rare in the arts (written and theatrical) world and I hope that this piece in The Naked I will make many more aware of the femme struggles.” Director: Shannon McCarville; Performers: Katie Starks and Kendra Ogdon

CLAIRE AVITABILE – producer: The Naked I: Insides Out

Following the Minneapolis world premiere of The Naked I: Wide Open in early 2012—which featured the contributions of over 50 LGBTQ and allied artists—20% Theatre Company continued to produce that show due to wide demand, performing an abridged version for colleges, universities, organizations, medical facilities, and conferences locally and throughout the country. We still receive requests to perform that show even today, but because there are an infinite number of stories to be told, and important voices to be heard, we decided to retire The Naked I: Wide Open and set out to create a new Naked I with fresh voices and perspectives.  During the summer of 2013, we received 119 submissions from 84 individual queer and trans* writers from seven different states in the US. This fall, a group of nine local queer and trans* artists read and reviewed all of the submissions, and helped select the 25 pieces that will be performed on stage. In October, we received 31 directing applications, from which 15 local directors were hired. At auditions in early December, nearly 100 artists tried out for the show, and the final cast features 35 incredible performers who have been rehearsing for the past two months! In total, The Naked I: Insides Out features the contributions of over 75 queer, trans*, and allied artists. Now that’s a lot of numbers! Whew! The previous two Naked I plays have pretty strictly been about gender identity – with a focus on transgender and gender non-conforming experiences. This new Naked I production gets a big broader and includes some perspectives about sexuality and queerness as well as gender identity and trans* experience. 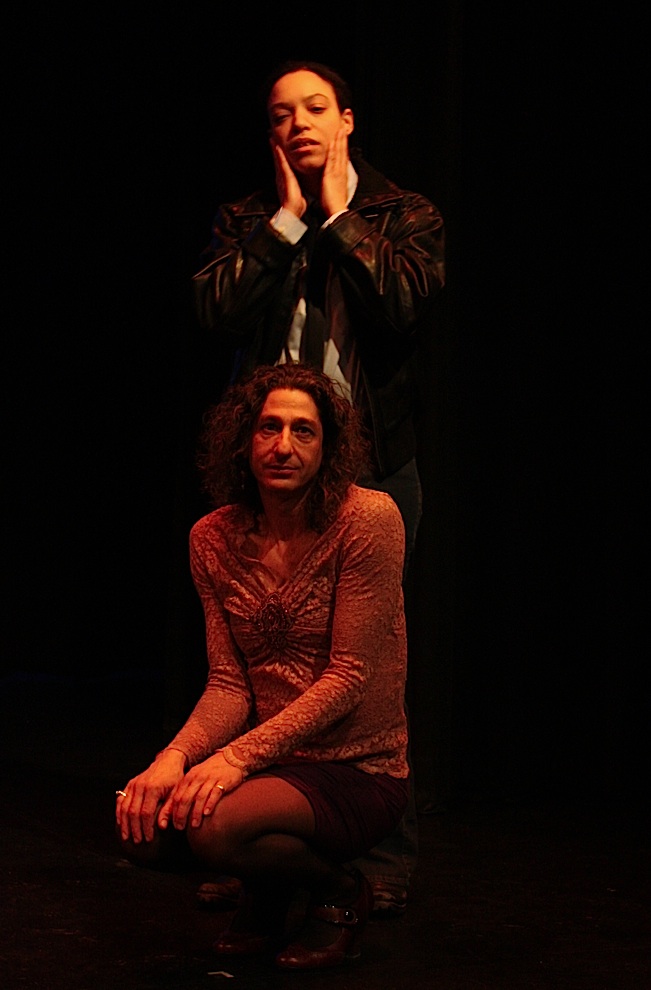