GLBT Christians in the Twin Cities area will discover that many churches are opening their doors to our community like never before.  Recently, three large congregations have called openly gay men to serve as their senior ministers.  Together they share a message of hope and healing.

Pastor Bradley Schmeling was raised in the Lutheran faith in Cincinnati, Ohio. His early years included college, the seminary and a traditional marriage. 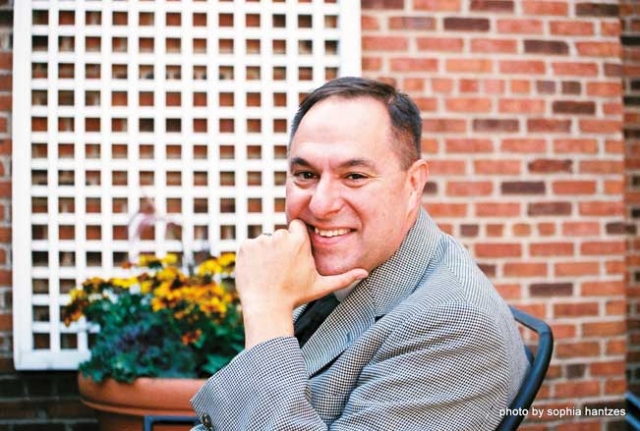 He was serving his first congregation when the gay feelings that he had been suppressing since adolescence resurfaced. He came out to his wife and to his congregation.  Schmeling recalls, “There was a lot of pain in ending the marriage, but at the same time I was coming out and so much of me was coming alive. I was living with a kind of honesty and integrity that I hadn’t lived with before.”

It was the early 1990’s and he was connecting with the larger gay community and making friends. “People said that my preaching got so much better. I think it was because I understood the story more profoundly. Dying to one way of life and being raised up to a new one,” remembers Schmeling.

He decided to leave parish ministry and attend graduate school at Emory University in Atlanta. Eventually, he was encouraged to apply for a post at St. John’s Lutheran Church in Atlanta. “I was totally out through that entire interview process, so when the congregation called me, there were no surprises. I was single, so technically I was within the guidelines of the church,” recounts Schmeling.

In 2004, he met his partner Darin Easier, also a Lutheran minister, at a church conference in Minneapolis.  By 2005, they were in a relationship. He shared the news with his congregation; they threw a party to celebrate.  His Bishop began the process of initiating formal disciplinary charges against him, asking him to resign.  He decided to stay.

Schmeling was put on trial in January 2007; that summer he was removed from the clergy roster. The trial made national headlines. Lutherans began to think about homosexuality and the church. Was it right to remove a pastor from a congregation that is happy and doing well?

The trial moved the church faster and further along.  In 2009, the Churchwide Assembly of the ELCA approved a resolution to open the ministry to gay and lesbian pastors living in a committed relationship. Schmeling was reinstated.

In 2012, he accepted the call to serve as senior pastor at St. Paul’s largest ELCA church, Gloria Dei. Schmeling explains, “I felt drawn to their mission and ministry. Twenty-five years ago, it was the largest Lutheran congregation to call a woman as a senior pastor and Martin Luther King preached there in the 1960s.”

He believes his own experience of being marginalized by the church makes him more sensitive to those who continue to be excluded. Schmeling states, “There’s a lot of work yet to do. Bullying continues to be a huge issue in schools, in sports, even in business. The church has got to be a voice that challenges bullying.  The church has yet to fully deal with its transgender members. I think the mission of the church is always to be crossing new boundaries and to be breaking down walls that continue to exist.”

The Reverend DeWayne Davis was born into a loving faith-based family in Mississippi. His father was an evangelist preacher. The church held a central place in daily life. He remembers clearly in middle school when he felt the spirit of the Lord fill him up, an experience he describes as physical and powerful. “I was in church and something very special happened,” Davis reflects. 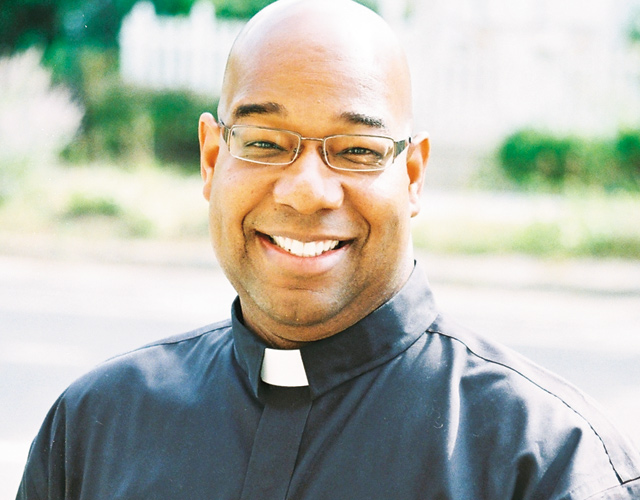 It was also about this time that his middle school put on a production of the play, Gypsy.  An experience that would offer another enlightened revelation.  “I was a chorus boy and there was another boy in that chorus and we fell in love,” Davis recalls.

He graduated from High School in 1989, and left Mississippi for Howard University in Washington, D.C.   It was there that he met his soul mate and future husband, Kareem Murphy.  It was this relationship that spurred him on to telling his parents that he was gay.  Davis recalls, “This was a low point for me spiritually, my father wanted to use what I call the language of oppression, rather than the language of understanding. He used phrases like, ‘perverted demon’ to describe what was going on with me. I call it, ‘spiritual malpractice.’  It is not a theology of healing. It was a hurtful and scary time.”

During this time of separation from his family, he felt alienated from organized religion.  Neither state would last long.  As his parents began to see that they might miss out on a relationship with their son, they began to reach out and gradually fences were mended.

After college, Davis took a job as a staffer on Capitol Hill.  He was out about his sexual orientation and found acceptance from the politicians as well as the other staffers.

It was during this time that he and Kareem began to search for a spiritual home.  They soon found it at their local Metropolitan Community Church (MCC).  A Christian denomination known as the world’s first church group with a primary ministry directed to GLBT persons.   This would open the door for Davis and lead him back to his spiritual calling.   After some hesitation he would follow his heart and join the seminary.

He was ordained and serving a church in Northern Virginia when the recent Minneapolis call came from All God’s Children Metropolitan Community Church.  He applied and was offered the ministry. In making the decision to move his husband Kareem didn’t hesitate, Davis’s voice breaks with emotion as he shares Kareem’s words, “Of course we’ll do it.”  They purchased a house in north Minneapolis and moved last August.  Davis adds with a laugh that they insisted that the house have a new furnace put in.

Reverend Davis is very excited about his current church and the work they are doing.  “As more churches become affirming of GLBT people, we can be nimble and move to meet the needs in our community and to battle what we call systems of oppression, such as poverty and incarceration issues.  Our work is about liberation from oppression and social justice.  We have the freedom to come together and say that anybody can preach the Gospel, despite one’s gender or sexual orientation.  That is the theology of liberation,” Davis concludes.

The Reverend Daniel Vigilante was raised with three older brothers in Morristown, New Jersey.  The family members were active members at their local Presbyterian Church. Of the brothers, he liked church the best.  He adds with a laugh that it is still true today. 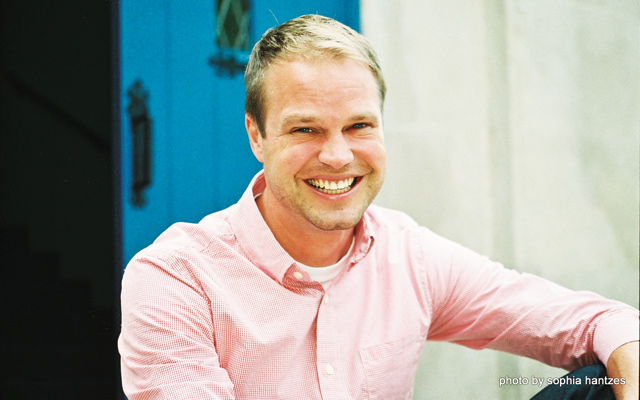 Like many other gay kids, he knew that he was different. Vigilante recalls, “I would say by middle school I started to really think about my feelings and that they were not a phase. It was around the same time that I started to feel a call to the ministry. I guess the two go hand-in-hand for my journey.”

He graduated from high school in 1995.  Once in college he told his family and friends that he was gay. “I was very blessed. I heard nothing but affirmation and love from my parents, my brothers and my friends. I’ve never lost a relationship because of coming out. I’m very lucky,” Vigilante reflects.

He went on to complete his seminary studies, but withdrew his name from the ordination process. The church wasn’t allowing openly gay people to be ordained. At the same time, there was a lot of work taking place to try and change the constitution. He believed that real change doesn’t happen from the outside, so he stuck with the church. He felt the need to be an example for people. He found a church in California that was willing to call him as an associate pastor, though not ordained as one.

In 2011, in a monumental move, the Presbyterian Constitution was changed allowing the ordination of gays and lesbians. Soon after that Vigilante was told about a position at Grace-Trinity Community Church in Minneapolis. He was interested, leading him to restart his ordination process, he found the exam particularly challenging. “I had to study a lot more. I hadn’t taken Hebrew or Greek in like nine years, so you forget a lot of that. Fortunately, I passed them all,” Vigilante recalls.

In 2012, he assumed the senior minister position at Grace-Trinity Community Church, located in the Uptown area of Minneapolis. Vigilante has found the congregation to be very progressive. Thus far, he is loving Minneapolis, “There is so much going on, so many people from different backgrounds. Our church is finding her niche. Many of the people who come to us are younger.  They are looking for a place, other than the bars, to meet people and make friends. We have a really cool opportunity to reach out and to serve as community for them,” Vigilante explains.

He believes that the church has a lot of relationships to repair. “There are some very forward-thinking, inclusive, and compassionate people who have welcomed GLBT people into the church for decades, for whom this was never an issue,” Vigilante states. He regrets that often the larger Christian message, particularly on the television news, is that of exclusion.  He adds, “The church has a lot of work to do to repair relationships with those who have been hurt, wounded and alienated by that message.”

Today, an increasing number of Christian faith communities are defining themselves as, “reconciling congregations.” This means that they are welcoming and affirming to GLBT people.  One noteworthy congregation, Light of the World Lutheran Church in Farmington, recently put out a press release entitled, “ALL Are Welcome Here- No Exceptions.”  One line on the lengthy list of those welcome reads, “If you are male or female or transgender…” 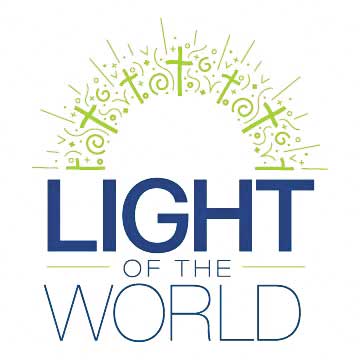 Another development on the Christian ministry front is Jay Bakker.  You may remember him as the son of television evangelist Jim and Tammy Faye Bakker.  The young Bakker has ditched the hateful messages of his parents and brought his Revolution Church from New York to Minneapolis.  The church adopts a philosophy that God is a loving and accepting entity rather than a judgmental one. His ministry is very inclusive of GLBT people and known to have celebrated marriage equality in Minnesota with rainbow-colored communion bread.

In South Minneapolis, Walker Methodist Church remains a historic stalwart for the community. The Church first embraced GLBT folks as a reconciling congregation in 1988.  There were many tears and social media posts in June of 2012, when a lightning strike burned the church to the ground.  The only thing that remained among the ashes was the church’s rainbow flag.  The congregation is now completing the building of a new church on the same site.  In 1968 Walker’s minister Bryan Peterson wrote, “Justice has never arrived, but is always just beginning to emerge, just as love cannot be a past event, but must be continually acted out in the world.” 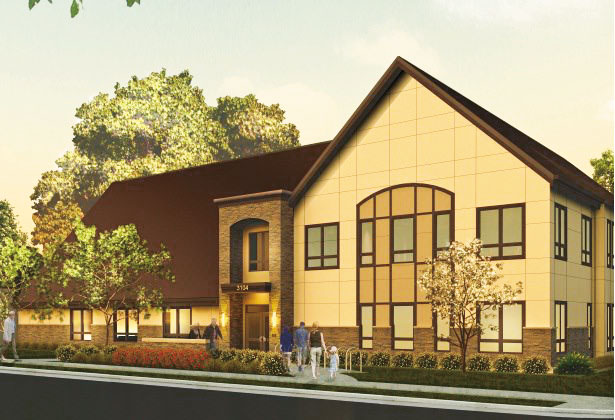