Skirting The Issues: Ellie Gets Braces! 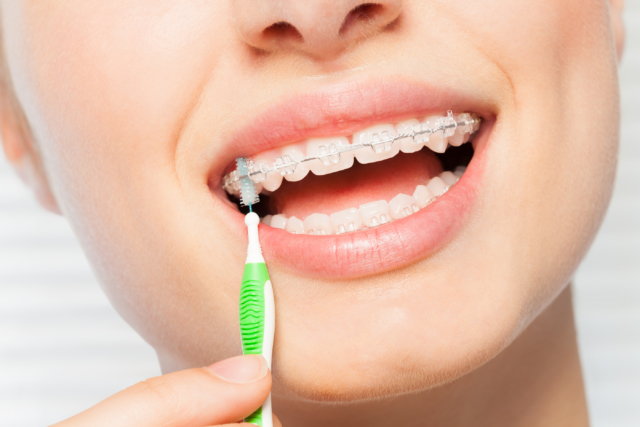 Seven weeks ago, I got braces.

Yes, you read that right—Ellie Krug, 61 years old—has braces for the first time in her life.

I escaped the ordeal of braces as a teenager because my teeth were relatively straight and because my parents didn’t want to buck my abhorrence to dentists, let alone orthodontists. Things went relatively well until my mid-50s when I noticed that a top front tooth (one of what my dentist termed “the social six”) had started to migrate backwards. Simultaneously, a snaggletooth next to it, which had only slightly protruded, was beginning to move outward way more.

With my speaking endeavors, I’m in front of the public a lot which also makes for me being frequently photographed. I began noticing a dark spot on my smile in photographs, meaning that my tooth alignment problem was there for all to see.

I first wondered if I could outlive my shifting teeth, but in the last couple of years, the shifting appeared to accelerate. Reluctantly, I investigated my options.

Initially, I thought I would go with Invisalign to keep my tooth alignment problem as private as possible. I found a dentist, underwent the initial exam, and then plucked down $2500 toward the clear tooth straighteners. Two things put that idea to an end; first, I needed to have a root canal which delayed getting the Invisalign.

Secondly, the dental assistant misgendered me to the office receptionist and when I gently corrected her, she didn’t apologize. That, shall we say, left a sour taste in my misaligned-toothed-mouth.

I then made my way to an orthodontist, “Dr. Z”, who’s slightly older than me and a bit of a character. He’s also darn smart about aging smiles; his response to using Invisalign was that while it worked, it was the equivalent of “traveling from Minneapolis to Saint Paul via Chicago.” He promised to have my teeth straight in eight or nine months compared to the near two years for Invisalign.

So, I found myself sitting on a dental chair having braces put on my teeth. I was admonished about brushing after every meal and told that no longer could I have some of my favorite foods, at least in the way I was used to. Chomping down on Jimmy John’s subs, McDonald’s cheeseburgers and pepperoni pizza was out, as was eating Hershey’s chocolate with almonds or my favorite snack, cashews. (Yes, I’m a horrible eater—that’s probably a column for another day, assuming my diet doesn’t kill me before I write it.)

Somehow, I’ve been able to navigate eating with braces. Clearly, some foods are just completely out—like popcorn—until I’m free of the plastic and metal that’s now so obvious to anyone I encounter. (“Oh, you got braces,” a client exclaimed upon meeting me for the first time.)

Still, even at this very early point, I can tell that things are progressing. The “social six” are getting better aligned and so far, I’ve avoided much of the tooth pain that Dr. Z warned I’d experience.

I even came across a woman older than me who has braces; I encountered her in a bathroom at an event center during a party. She was 63 years old and had another year to go before being braces-free. “Wow,” I said. “You’re way braver than me.”

Regular readers will recall that I’m quite single, something I attribute to a combination of my age, gender, transgender status and general pickiness relative to dates. Now I can add braces to the list of reasons why I won’t get a date—or even casual sex.

I lamented about this over lunch with Jean, a lesbian friend. Several years ago, back when I drank, Jean and I found ourselves making out over dessert after a Thanksgiving dinner at my condo. That was quite delightful for us, but I don’t think the other dinner guests appreciated it very much.

An hour later, as we hugged goodbye outside the restaurant, Jean said, “Come here,” signaling for a kiss.

“No,” I answered, worried about food being stuck in my teeth and how that would not be pleasant for her or me.

I gave in and our lips locked for a deep kiss. I briefly pulled away and then went back in for a second, which Jean easily obliged.

As we both separated, Jean exclaimed with a smile and a laugh, “See Ellen, it still works!”

Maybe I’ll survive braces after all.