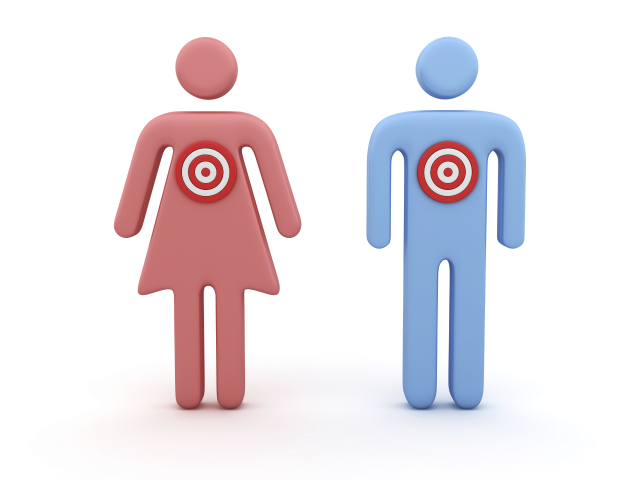 I feel as if I have a target on my back.

Or maybe it’s a bullseye on my left boob. Perhaps I’m just a sitting duck, waiting for that eventual lucky shot at my psyche.

Whatever may be the actual point of emotional penetration, I’ve got way more angst these days over how I and a million other trans folks are being singled out in many parts of the country.

As the Human Rights Campaign originally reported, and as Samantha Allen of The Daily Beast neatly summarized, as of late February, there were 44 anti-transgender bills being considered in 16 state legislatures. More than half of the proposed bills target trans kids, the most vulnerable of the vulnerable, by seeking to deny them access to the bathroom or locker room that conforms to their gender identity. More about this in a minute.

Think about it. Assuming this bill becomes law, if Ellie Krug married an Oklahoman (of course, what are the odds of that?), our marriage license would have a big fat notation suggesting to any reader that I wasn’t real.

Still, stigma notwithstanding, at least I’d be able to marry in Oklahoma.

That wouldn’t be the case in Tennessee if some legislators get their way with a proposed bill (HB 2600) that seeks to define what constitutes “husband” and “wife.” Under this legislation, one must be a “natural-born male” or a “natural-born female” as defined by the person’s original birth certificate. Given that Tennessee absolutely prohibits changing one’s birth certificate in any way (meaning that even with gender reassignment surgery, a trans woman isn’t able to convert a birth certificate from “male” to “female”) this bill, if it became law, would effectively bar any transgender Tennessean from marrying.

Wow. Even I’m impressed by the audaciousness.

Other anti-trans laws range from restricting access to medical care to utilizing original birth certificates as the determinative factor on all matters. A Washington state bill (HB 2782) (which ultimately failed) involved some chromosomal nitty gritty: only persons having “male deoxyribonucleic acid” would be able to utilize male-oriented restrooms and other personal care facilities; similarly, female-oriented facilities would have been accessible only to persons with “female deoxyribonucleic acid.”

On top of all of this are bills that contain a new version of the First Amendment Defense Act (FADA), which heretofore had only been claimed by vendors and businesses seeking to avoid serving gay marriage clients on the basis of sincerely held religious beliefs or moral convictions. Now, there are a host of proposed laws allowing people to discriminate against trans persons if the discriminator (hater) has a sincere belief or conviction that one’s biological sex is “distinct and immutable” and something determined only by “anatomy and genetics at the time of birth.”

This FADA stuff is so incredibly dangerous; once “religious belief” is accepted as a legitimate basis to discriminate, where do we stop? After all, weren’t the Founding Fathers morally convinced that God made black persons inferior? Isn’t misogyny built into the Old Testament?

It scares me to death. Will l have to pin a pink star to my blazer on some future day of reckoning?

But that’s nothing compared to what legislators and their supporters are doing to trans kids.

As time takes us further and further from the anti-marriage fight of 2012, fostering for gays and lesbians a greater sense of security, it’s much easier to forget what it means to be a 15-year-old kid wrestling with gender identity, without support, totally alone and afraid.

And what does that kid hear from society relative to his/her/their value?

That they’re not even worthy enough to pee in a place that matches their true, authentic self.

I understand that some in “mainstream” America (wherever the hell that is) are afraid of social change that legitimizes folks who are “different,” especially when it comes to bathrooms, locker rooms, and school-related sports. I also get it that Sunday services are the week’s high point for many. I even realize that there’s a fair percentage of folks unhappy with themselves, thereby making it easier to marginalize others.

But we’re talking about kids here — young people who lack perspective or resiliency or grit. We can’t ignore that the legislative messaging from many quarters of this country is that trans kids don’t matter; that their hopes and needs to live authentically must take a backseat to religion, bigotry, and ignorance.

How many trans kids do we need to lose to suicide or addiction before this madness ends?

I’d really like one of those bigoted legislators to answer that question.

A shout-out to trans youth in Minnesota: contact Ellen (Ellie) Krug at ellenkrugwriter@gmail.com if your school has a gay-straight alliance (GSA) or other LGBTQ support group that’s willing to sponsor Ellie. Assuming the logistics can be worked out, she would be happy to speak at your school about the value (and hard work) of living authentically. Her fee: gratis (one of those Latin words meaning “free”).