Duluth newscasters Dan Hanger and Edward Moody share their stories of being the only two gay news anchors in the Duluth area.

Dan Hanger of Fox 21 in Duluth grew up in the suburbs of Chicago near the O’Hare Airport. Deciding to stay close to home, Hanger went to Columbia College Chicago where he got a B.A. in broadcast journalism in 2005—a career path that seemed the obvious choice to Hanger. 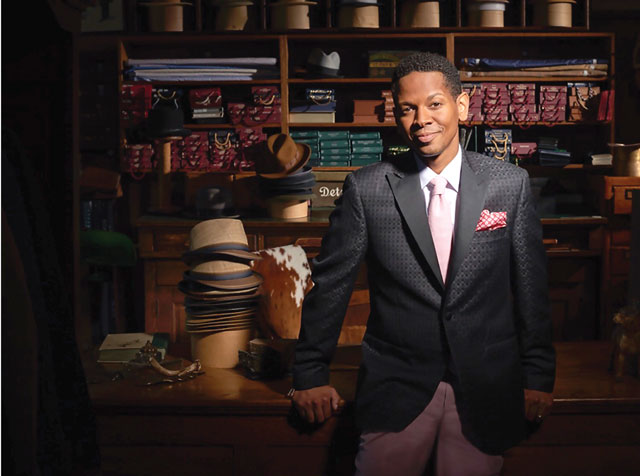 Emmy-winning CBS 3 Duluth anchor Edward Moody is one of two gay anchors in the Duluth area, and previously worked for WCCO in the Twin Cities. Photo by Jake Armour

“Ever since I was a kid, I was obsessed with watching the local news. I loved everything about it: the lighting, sets, graphics, music, stories, anchors, and reporters. It all just naturally fascinated me,” Hanger says.

Throughout his high school years, Hanger toured local news stations where he met some of the anchors and staff, which is how he met some of his friends and his mentor in the field. Due to his clear determination, Hanger landed a job as a web editor in the NBC Chicago newsroom at just 19 years old. He stayed at NBC Chicago, where he published news content for all of the NBC owned-and-operated TV station websites, until he graduated and landed his first gig at KBJR-TV before later joining FOX 21 in Duluth.

Once Hanger got to Duluth, he was excited but hesitant to identify with the GLBT community. However, after being featured in an article in the Duluth Reader during Pride in 2014, he was able to tell his story and fully express his identity. Since moving to the area in 2006, Hanger has been the grand marshal for the Duluth-Superior Pride Parade and received the Shining Star Award, too.

“It’s nice to be recognized for being out in this town, as it wasn’t easy for me years ago. When I first moved here in 2006, I was very worried to say a single word about being gay. One, I had serious issues with myself about coming out and was not comfortable with it at all and was just scared about what family and friends would think,” he says. “Two, I had the mindset back then that coming out would hurt my career in television. I might not be able to get a bigger anchor job. At that time, there really weren’t any prominent gay anchors who were out that I knew of. And from what I was reading then, I had the mindset that gay journalists might land morning anchor roles, but not main anchor gigs out of fear the station could lose some of its audience.” 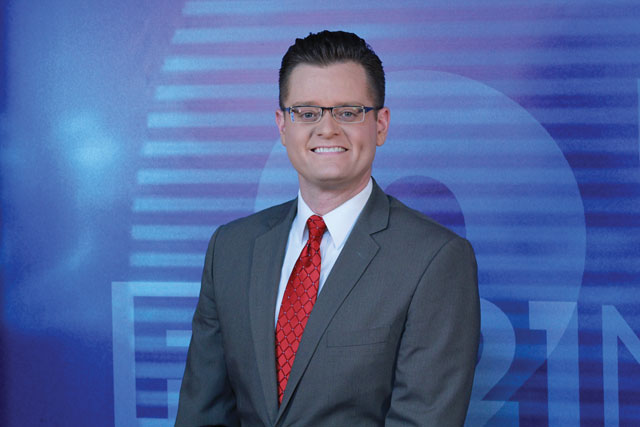 Dan Hanger, a news anchor at KQDS-TV in Duluth, is one of two gay anchors in the Duluth area. Photo courtesy of KQDS-TV

Like Hanger, Edward Moody found his path in broadcast journalism at a young age. At ten years old, Moody was cast as an anchor/reporter for a nationally syndicated news magazine for kids.

“The experience exposed me to the power of asking questions and questioning power,” Moody says.

From Kansas City, Missouri, Moody also decided to stay close to home for college and attended the University of Missouri-Kansas City for broadcast journalism. After college, Moody decided it was time to branch out to a new town and moved to Duluth in 2002 to start his first job as a reporter at KBJR-TV.

Unlike Hanger, Moody says he was eager to tie his personal and professional lives together and even tells stories about his husband and in-laws on-air, which he hasn’t received any negative feedback for so far.

“My bosses knew I was out on-air when they hired me, which I think speaks to their faith in this community. As a black, gay man, I’m always aware of how people react to me, and I’ve never felt anything but love from Duluth viewers,” Moody says.

Despite Moody’s coming out on-air, he says he likes to live a fairly private life with his husband. The couple bought their first home just over a year ago where they’re raising their “fur babies,” two dogs and two cats. Moody says his life is very similar to anyone else in the Duluth area. His husband enjoys hunting in the fall, and they frequently treat themselves to Sunday brunches with friends.

Hanger and Moody both say that Duluth’s GLBT community is vibrant and continues to grow. According to Moody, when he initially moved to Duluth in 2002, the mayor wouldn’t even acknowledge the annual Pride celebration, but now Pride kicks off with a mayor’s reception every year.

Outside of Pride celebrations, Hanger says that the romantic climate of Duluth can sometimes make it challenging to date in the GLBT community.

“Duluth has a decent-size gay community for the size of this city, but it’s very fragmented. There are the college gays and older gays, but if you are a younger working professional in your 30s (turning 35 here in August), good luck,” he says. “It’s very, very difficult to date. I believe it’s the same feeling for the straight community, but clearly more difficult for the gay community. As for the acceptance level, I never feel unwelcome here.”

Hanger and Moody have enjoyed their time in Duluth, though Moody spent some time bouncing around other cities. After working in New York and Indiana, Moody and his husband made their way back to Minnesota after he took a job at WCCO in Minneapolis where he won an Emmy for his morning show. The couple eventually realized that they missed their Duluth life and moved back after two years in Minneapolis.

Hanger has a contract with Fox 21 through the end of 2019, so he is just taking it one day at a time and enjoying the community.

“You never know what can happen. Will they renew? Should I move on?  I try to take one day at a time, but there is a sense of mid-life crisis coming on. Turning 35, still on the single train, and just might finally want to make some bigger dollars than what this market pays. I’m always open to change, but I also treasure what I have here,” Hanger says.

Hanger and Moody are both hopeful that broadcast journalism will open its newsrooms to more diversity, especially with regard to the GLBT community.