Leather Life: The Atons of Minneapolis—40 Years of Leather Brotherhood 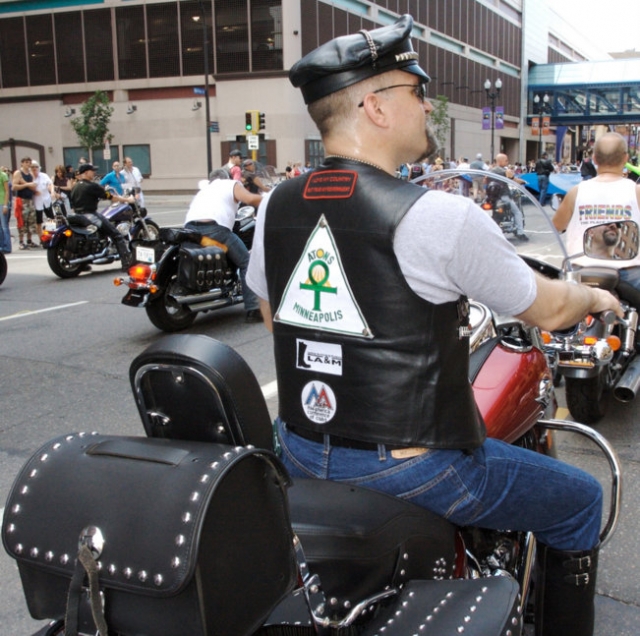 Forty years ago, in the spring of 1972, a group of Twin Cities leathermen got together and formed the Atons of Minneapolis.

Things were a lot different in 1972. What was then known as the Gay Liberation movement had caught fire after the Stonewall uprising three years before, in 1969, but was still in its infancy. The first Gay Pride celebration took place in Minneapolis. And 1972 also was several years before the start of the AIDS crisis.

Before the formation of the Atons, there was no place for leather culture in the Twin Cities. The few men who were into leather were, for the most part, underground about it. Jim Courtney, one of the founding members of the Atons, recalled recently: “I was told you don’t wear your leather in town. You go out of town [to wear it]. Nobody seemed to want to have their friends know that they were interested in that sort of thing.”

Larger cities like Chicago, San Francisco, Los Angeles, and New York were seeing an influx of military personnel returning from World War II who, while serving in the armed forces, had discovered they were attracted to others of their own sex. These men were banding together to form the first gay leather clubs and motorcycle clubs. The oldest gay motorcycle club still operating is the Satyrs of Los Angeles, which recently celebrated its 50th anniversary. The Atons are not a motorcycle club, although many members over the years have owned and ridden motorcycles.

Courtney’s partner at the time, Larry Daniel, had been visiting some friends who were part of New York City’s leather community. He had returned to Minneapolis wanting to host a leather “run” (party) in Minneapolis, and a group of men came together to put the run together.

The run became Aqua 1, the group became the Atons, and Daniel became the club’s first president. Aqua 1 was an in-city run (as opposed to the club’s current camping runs in the country), and visitors were lodged in Atons members’ homes rather than at a hotel. About thirty people attended Aqua 1, including many members of the Second City Motorcycle Club of Chicago, with which Courtney had been involved when he lived in Chicago before relocating to Minneapolis.

From that beginning, the Atons, for forty years now, have been a part of the Twin Cities GLBT and leather community. The club’s life can be described in terms of its events and activities.

The club’s year starts shortly after New Year’s Day with an Officer Installation Banquet, a relatively formal gathering at which the club’s officers for the year are sworn in and other awards and recognitions may be given. In spring, the Atons hold a smoker and rush party at which people from the community can meet the members of the club and find out more information about either Associate or Full memberships. (Disclosure: your humble columnist is an honorary full member of the Atons.) Candidates for full membership first go through a period of being a Pledge.

Also in spring, the club for many years hosted Eros, one of their two major semi-annual parties.

July brings two major events. Every other year, the club presents their Gopher run, an elaborate camping weekend with games, parties, and a banquet. During non-run years, the club hosts a more informal camp-out weekend at the same campground.

Themes of previous runs have included Gopher U, an academic-themed run; a Close Encounters alien-themed run; and a Trailer Park run. The club’s 25th-anniversary run was unusual in that it was held in the fall, in town, and in a hotel. In keeping with the theme of that run, “A Renaissance—Renewing the Ties that Bind,” the highlight of the run was a trip to the Minnesota Renaissance Festival. This year’s run, Gopher XX, will be the high point of the club’s 40th-anniversary celebration. (See below for more information.)

In addition to hosting a run every other year, members of the Atons travel to runs presented by other clubs, both in the Twin Cities area and by clubs in other areas of the U.S. and Canada. Over the years, club members have traveled to runs in Wisconsin, Iowa, Illinois, Kentucky, Tennessee, Washington, D.C., Atlanta and elsewhere.

The club’s other major semi-annual event historically has been a Halloween party held in late October or early November.

At the beginning of December, the Atons host an annual holiday fundraiser, which historically has included both a food drive and silent and live auctions benefiting a nonprofit charity, often an AIDS-related organization such as The Aliveness Project, Open Arms of Minnesota, or Every Penny Counts. Besides the auctions and food drive, the holiday fundraisers have featured the services of bootblacks and barbers, as well as holiday photos with Leather Santa.

In addition to these annual events, the club has a monthly meeting for business and fellowship. It also hosts monthly Leather/Levi Dinners that are open to the community.

There also are the spur-of-the-moment social opportunities—members might get together for brunch, dinner, a movie, a motorcycle show, or an art exhibit. Sometimes club members gather to offer help to another member or to a friend of the club.

Finally, the club’s 40 years of brotherhood have taken Atons members through the AIDS crisis—caregiving, supporting, fundraising, and attending funerals and grieving together.

Over the years the Atons have sent members to compete in leather contests and have sponsored other contestants as well.

For many years, the Atons have worked cooperatively with other local leather clubs including the Black Guard of Minneapolis, the Knights of Leather, the Minnesota Storm Patrol, and an early Twin Cities leather club called the Norsemen. The Atons also are members of the Mid-America Conference of Clubs (MACC), an organization that coordinates activities and events among many leather clubs. Members of the Atons also have been involved in Minnesota’s annual Leather Pride celebration since its beginning.

Why have the Atons lasted, while many other leather clubs in the Twin Cities and elsewhere have come and gone? A Lavender cover story in 1997, on the occasion of the club’s 25th anniversary, branded them “tenacious as hell.” My explanation, based on observing and interacting with the club since 1993: they are a group of intelligent, friendly individuals who maintain high standards. Because of this, they have been continuously able over the years to attract new members who keep renewing the club and perpetuating it and its spirit of brotherhood. That brotherhood has been strong enough that it has lasted and stretched unbroken over 40 years.

The Atons will be celebrating their 40 years of brotherhood July 20-22 at their 40th anniversary run, “Gopher XX: 40 Years of Devotion.” For details, or to register to attend the celebration, visit www.atons.net.

Why is the club called the Atons? The name refers to the ancient Egyptian ruler Akhenaten, who was so distinctive that in 1983 composer Philip Glass wrote an opera about him. Akhenaten, who ruled for only seventeen years, was a revolutionary figure in several ways: First, he attempted to convert the Egyptian religion of the time from the worship of many gods to the worship of one god, the Aten, symbolized by a golden disc representing the sun. Second, while Akhenaten had a wife named Nefertiti, he also had a male lover named Smenkhkare.

In recognition of both his introduction of monotheism and his being one of the first gay historical figures, the club decided to call themselves the Atons. The club is one of the few, in the whole universe of leather clubs past and present, whose name is derived from an Egyptian source.

All photos courtesy of the Atons.

The current club colors (insignia) of the Atons of Minneapolis.

An early photo of Atons members with their club colors.

One of the club’s early runs.

One of the club’s early runs.

Club motorcycle trip to The Main Club in Superior, Wis.

Another club motorcycle trip, probably in the late ’80s or early ’90s.

Atons officers at the club’s 15th-anniversary banquet in 1987.

Atons officers cutting the cake at the club’s 15th-anniversary banquet.

Photos with Leather Santa at an early Atons holiday fundraiser.

Photos with Leather Santa at an early Atons holiday fundraiser.

Atons officers at an officer-installation banquet in the early ’90s.

Atons officers cutting the cake at the club’s 20th-anniversary banquet in 1992.

A rack full of leather jackets outside the 1997 Atons officer-installation banquet.

Club members at the 25th-anniversary banquet in 1997.

Club members at the 1999 Atons Holiday Fundraiser with food collected for The Aliveness Project’s food shelf.

Club members in 2002 at the Atons Holiday Fundraiser with food collected for The Aliveness Project’s food shelf.

Getting a bootshine at the Atons Holiday Fundraiser in 2002.

Because the club did not present a run in 2003, club members were free to relax at their summer campout.

Club officers at the 2004 officer-installation banquet.

Getting a haircut at the Atons Holiday Fundraiser in 2005.

Members of the Atons, Black Guard and Minnesota Storm Patrol in 2006.

The 2010 Atons run, “Gopher U,” was a college-themed run that included a toga party.

The back of Atons member Sam Carlisle’s vest in 2011.

The club’s current officers at the 2012 Atons officer-installation banquet.