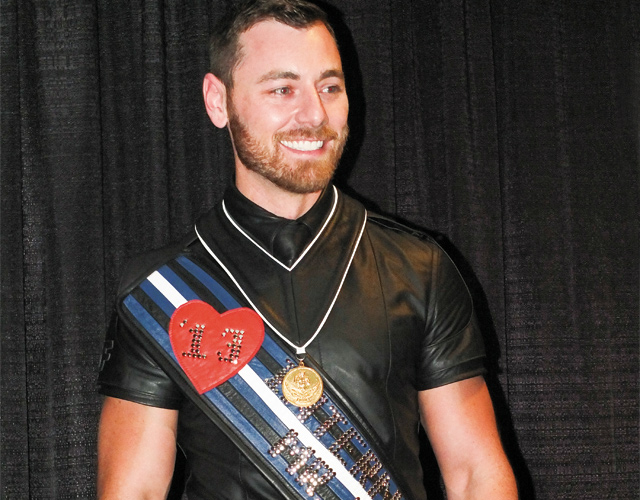 Andy Cross, the current International Mr. Leather (IML) titleholder, will be in Minneapolis this weekend as one of the judges of the Mr. Minneapolis Eagle 2014 contest. I recently called him in San Francisco and asked a few questions.

Did you have any childhood inklings that leather might someday be an interest of yours?

My first memory of leather—and it has stuck with me all these years, so it’s pretty formidable, I guess—is when my uncle, my father’s brother, came to visit us one time. He was a motorcycle guy and came in wearing chaps and a leather jacket. I wasn’t so much attracted to him as attracted to the leather. I remember, he let me wear his jacket, and I thought it was the coolest thing. I loved the smell of it. There was just something that was inherently manly and sexy about the leather for some reason. And it’s been a turn-on ever since.

What went through your mind when your name was called as International Mr. Leather 2013?

It was so great because I wasn’t expecting it at all. And I think the thing that meant the most to me was that there were a lot of San Francisco people in the audience, some of the guys who had helped me prepare.

How has your title year been so far?

It’s been busy, but it’s been fantastic. It’s definitely been the ride of my life. I’ve met so many people and seen so many cool things.

And I get to visit cool places. I was in Alaska a few weeks ago. I’m going to Europe in a few months. I was in Texas a few days ago. And I’m going to Los Angeles on Thursday.

And you’re coming to Minneapolis to be one of the judges for this year’s Mr. Minneapolis Eagle Contest.

I am. I’m looking forward to it.

What other contests have you judged as IML?

As you judge the Mr. Minneapolis Eagle contest, what will you be looking for?

I’ll be looking for someone that I want to talk to. Especially in an interview, I’m not necessarily looking at the content of their answers or what their opinions on certain things are, because everyone has their own opinions. I’m looking to see if they’re genuinely a nice guy, and if I approached them in a bar or at a party, would I want to talk to them? Would I want to hear what the leather community is like in Minneapolis if they were telling me? That’s really the most important thing that I look for.

What do you want to accomplish during your title year?

That was actually one of my questions during the IML interview. The question actually was, fast-forward a year and you’re IML—what would you want to be remembered for? And my answer was kind of what I already said, being a conduit of information between regions or communities. I mean, that’s how we grow as a community, and that’s how we change, and I think growing and changing is essential.

Have you thought about what you want to do after your title year is over?

Sleep in at least for one weekend! But other than that, like I said before, I’m having the ride of my life, and I love it right now. So I guess I’ll have to cross that bridge when it comes.