Lavender Love: Going to the Chapel – Jason and Corey 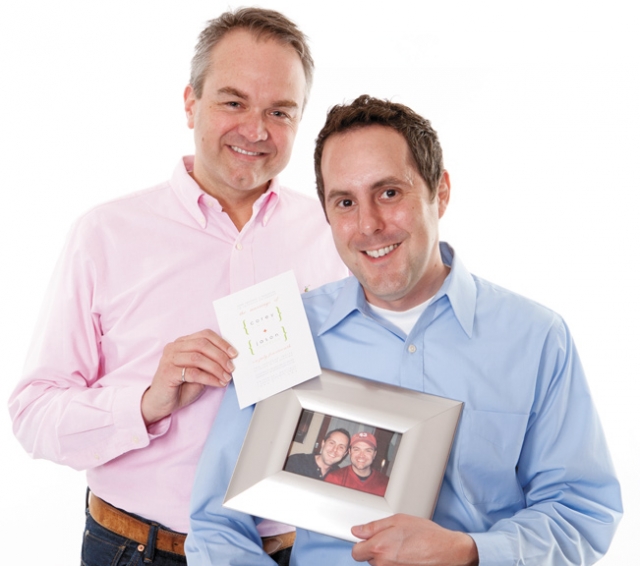 It was five years ago that Jason clicked on Corey’s profile on Match.com, and a success story was soon to follow. They met up for drinks at “Ike’s” in downtown Minneapolis. Surrounded by moms and daughters waiting to attend a Hannah Montana Concert, a memorable connection was formed instantly between them. When I asked Corey what it was like to meet for the first time, he responded with, “I do remember I wore a baseball cap, because I was to the point where if this guy likes me with a baseball cap on, we may have a chance.” Since then, not a thought of parting has entered their minds. The idea of marriage was a hot topic for the two for a while, but they decided they were only going to get married if it was legal in the state that they lived in.

After seeing no positive movements with Minnesota and the proposed amendment, Corey and Jason wanted to take a stand to the State, but also wanted to symbolically and proudly display their love to everyone. “We both love each other, we have goals in our lives and we want to achieve them. Why should we have to press pause on one of our major life goals because our government says no to marriage?” Jason says.

So, they spent the next five years building a loving and trusting relationship while growing deeper in love with each other, and on December 16th, 2011 the question was popped. It was a quiet night together during Christmas, opening presents with their pug and puggle doggies crashed beside them. Jason gave specific instructions to Corey to open a special gift last, and when it came time, Corey pulled out a small square box out of the bag. Inside the box, there laid a ring and Jason said, “I’d like to spend every Christmas for the rest of my life with you and was wondering if you’d like to do the same.” Of course, Corey accepted.

Even though they cannot get married in Minnesota, they will head to Iowa to tie the knot. Their friend, Todd, went online and got ordained and will be conducting the ceremony. Another friend, Catherine, offered to host the ceremony in her boutique in downtown Iowa City. After the ceremony, the couple will walk with family and friends to their favorite restaurant,The Motley Cow Cafe, to continue their celebration.

A wedding should reflect the people: simple, fun, casual, and being surrounded by the people who love them and have given them support toward happiness. A wedding is very basic: I love you; let’s get married and spend the rest of our days together finding more ways to make each other happy.

Currently, in Minnesota, marriage is defined as being between one man and one woman, according to the Defense of Marriage Act (DOMA). Understandably, this could be over-turned by an act of Congress. To prevent that, opponents of same-sex marriage introduced a constitutional amendment to reinforce the “one man, one woman” definition. “It’s like wearing a belt and then putting on suspenders,” Corey described. Corey is on the board of the Human Rights Campaign (HRC) and is co-hosting this year’s HRC dinner. Jason is co-chairing the silent auction committee for the HRC dinner. They put much stress on the fact that it is vitally important for people to tell their straight allies. They are both very big supporters of “Voting No” or “Don’t Vote at all” for the marriage amendment. “We want to change hearts and minds, all done by love” Jason so memorably expressed.

The couple is pure evidence that there are so many precious things in your heart and in this world that simply cannot be taken from you. Jason and Corey did not meet by chance; they found each other by fate.