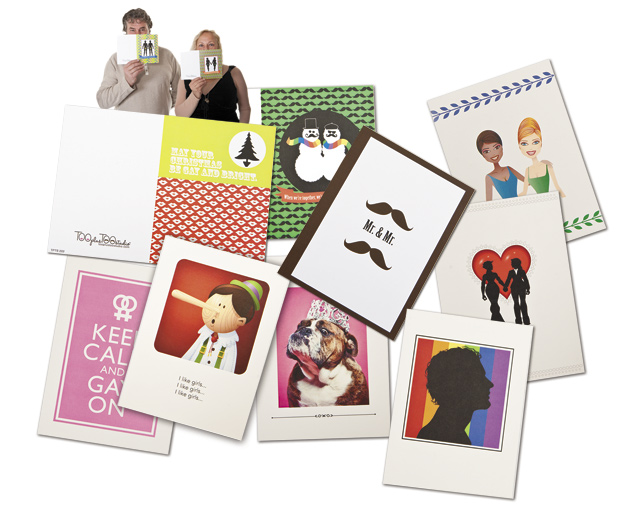 Entrepreneur Debra Pesek glows as she talks about her line called “Too plus Too” of GBLT greeting cards. But it was during a dimmer period of her life that the inspiration struck. A few years ago, lying in bed recovering from treatment leukemia, she had an epiphany; there were no cards designed especially for the gay and lesbian population.

“It just came to me in the middle of the night” she says. Describing herself as a spiritual person she thought, “this is something I can do.”

But going from epiphany to reality proved harder that she anticipated. Fortunately Pesek has a background in aesthetics, having worked in interior design, repurposing furniture and house and garden television.

Her business partner Jeff Pomerleau came a little further out of his comfort zone in the masonry business to join Debra on the venture.“We talked to a couple of people and they thought it was a really good idea so we said okay lets go for it,” he says.

From picking type fonts, color schemes, hiring illustrators and writing the cards themselves with a little help from friends and family the two produced a line of artful, classy, witty and insightful cards geared to the GBLT community.

It is a business venture colored by passion and a cause they both believe in.

Says Debra, “I have lots of friends and family members who are gay and lesbian so they should have a card just like everybody else and if you were a mother and had a daughter who was either a lesbian or a son that was gay I couldn’t go buy a card for them for their birthday or their partner of if they were getting married adopting a child or whatever it happened to be so I think they should have cards just like everyone else

“No matter what”, adds Debra. 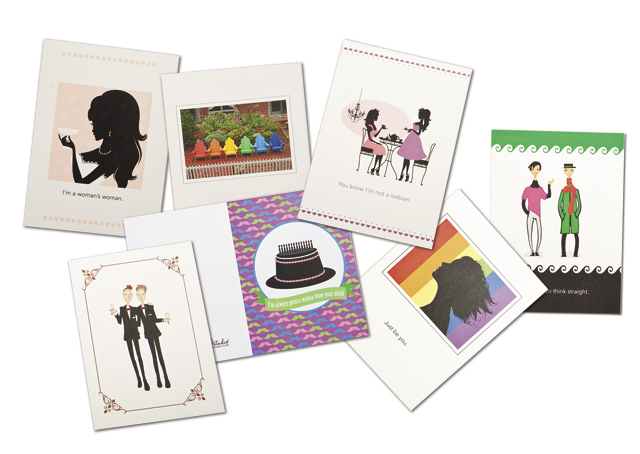 And no matter what the two are committed to taking their business to the mainstream starting in the Big Apple. Debra says they are signed up for the New York Stationary Show slated for May 20th through the 24th. With nearly 900 booths and 10,000 people expected to attend everyone from the grand daddies like American Greeting and Hallmark to the smaller time boutique artists will be there to get exposure, network and find suppliers.

Attending is huge commitment according to Debra but she says she and Jeff wanted to “go out there and saturate the market ahead of time.”

As we talk my eyes are continuously drawn to the stack of samples Jeff and Debra have laid out on the coffee table. Each one beautifully designed, humorous and unique. I ask them to pick out a few favorites. With so many it’s hard to choose but Debra pulls one from the pile with a caricature of King Henry the Eight on the front and the line “Henry the Eight had six wives.” On the inside, “My sister just wants one.”

I pick up one with a silhouette of two beautiful women on the front and the phrase “You know I’m not a lesbian…” inside, “Oh no? You were much more interesting when you were” and I can’t help but laugh.

Debra laughs along, saying “We are trying to be funny, not to make fun of people but we have to laugh at ourselves.”

No matter the occasion or sentiment, Debra and Jeff have the perfect card for those who may not be able to find just what they are looking for in the greeting card aisles of their local drugstore.

No matter where their business takes them it seems the two have already found success. “I believe we are doing a good thing so we’ll take it for a ride”, Says Debra. Jeff agrees, “Everything has been positive, it’s been exciting”

The positively exciting line is soon to be available via website, in meantime the cards can be found at the “Guild”, an eclectic shop owned by Debra at 4414 Excelsior Blvd.