Bone Adventure: An Open and Welcoming Retailer for All 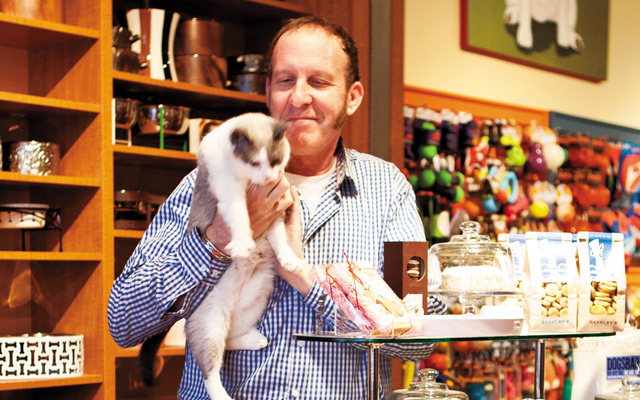 Brian Fulmer and his cat. Photo by Hubert Bonnet

Originally created as a retail section in the reception area of a boarding facility in Orono, Bone Adventure owner Brian Fulmer has launched the brand into a successful family business.

As a family operation, Fulmer’s three children from his previous marriage to a woman have all returned to help run the business. “What’s interesting as they grow up is that they all identify as gay or lesbian,” Fulmer says, who has been out for twenty years himself.  Having spent time away for college and to pursue other interests (the oldest lived in New York and Boston doing musical theater), Fulmer says it’s been a thrill to have his two sons and a daughter home and working with him – almost like coming full circle.

Dogs were a large part of family life as Fulmer’s children were growing up, since Fulmer raised and showed Alaskan malamutes. Reminiscing about photos of the kids through the years with different puppies, Fulmer fondly remembers his days with malamutes and corgis around the house. Since his show days, Fulmer has downsized to owning corgis only, which are around the Bone Adventure stores like mascots.

Fulmer, who began working with pets professionally in 1977, opened the first Bone Adventure standalone location in 1987. An active member of professional associations, Fulmer was coming across products all over the country and wanted to bring them back to a Minnesota audience and decided to open up a retail outlet to showcase his finds. “I would never have chosen to open a store if there had already been one, but the one that was there was closing, so I figured why not try it?” Fulmer says of his Wayzata location, the first to open. 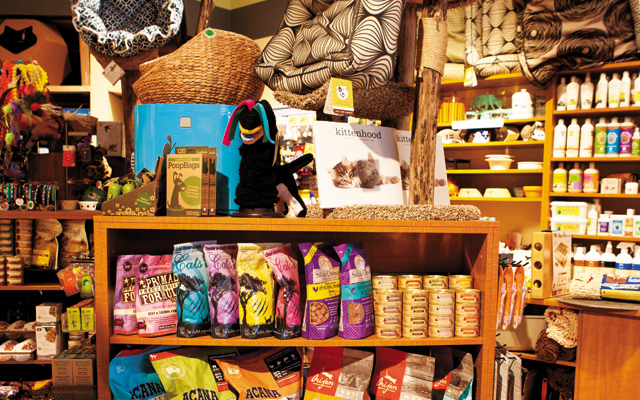 It wasn’t long before expanding was a natural choice. “It’s been fun to see the store develop,” Fulmer says. “People who came to our Wayzata store would ask, ‘Why don’t you have something closer in to the Cities, or farther east?’”

Now with four locations across the Metro, Bone Adventure is a staple in the pet community. Each store has its own personality based on the neighborhood it’s in, according to Fulmer. “We try to create a product mix that is good for that location,” he says. “Most of our foods we carry in all of the stores, with a little variety, but the other products vary. Our more contemporary things tend to be in the stores on France [Ave. S.] and in Northeast. Wayzata is more classic prints and patterns. We have people that will not just shop at one, but will go to all of them and say they prefer one based on what we carry.”

Products at the store cover the basic necessities in caring for pets: high quality foods, leashes, harnesses, and more. But customers need not worry about expensive boutique prices; many report prices similar to or cheaper than major retail outlets. So, what can Bone Adventure offer that other retailers do not? Fulmer says Bone Adventure is typically known for their collar and lead designs, and customers often say they’ve never seen the bed styles offered by Bone Adventure. And many of the toys meet child safety standards as well as for pets, something that Fulmer says can be pretty rare.

“We do carry items that you would only find with us in the Twin Cities,” he says. “Our collar line, ‘One of A Kind,’ are actually repurposed. They’re maybe vintage belts, or saddles, or bridle gear from horses that are made into collars. We also offer a lot of color leather collars that we do custom. We try to do a large percentage of American-made products.” 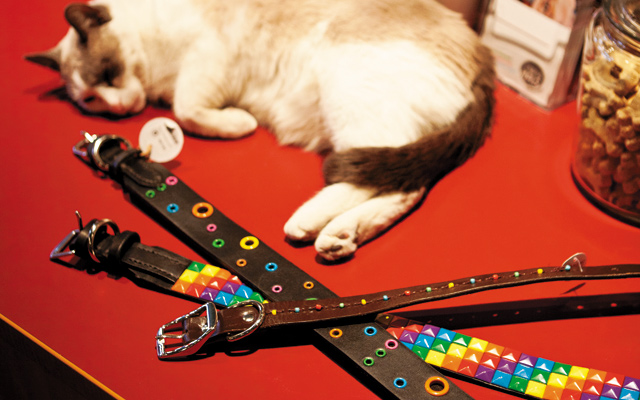 In addition, customers living farther away don’t have to worry about making the trek to the Metro.  Fulmer assures that they will ship products when needed, and have shipped all over Minnesota and into Wisconsin in the past. Customers hoping for the latest in pooch fashion will be disappointed, however. “We don’t really carry clothing for clothing’s sake,” Fulmer says. “But we do carry outerwear. We carry clothing that serves a purpose, although we do get kind of wild at Halloween and Pride with the costumes.”

Last year, during the fight to defeat the marriage amendment in Minnesota, Bone Adventure developed a poster describing how, as a company, they strive to serve all customers equally, and encouraged “No” votes.  After printing a first batch for his own stores, it wasn’t long before other store owners and clients came in asking for them. “We printed a few of them, and then other store owners and clients came in asking for more,” he says. “They ended up being in a lot of local businesses. It’s something that the campaign to defeat the amendment asked to have for their offices. It made for some great conversations in our store and we had people coming back asking for more, so we kept printing them for as many people as wanted them.”

Bone Adventure’s presence at Pride isn’t the only way they show they care about their clients. Pets are always welcome within the store and two of the locations even include a grooming salon as a full-service retail location for every pet owning need. And rightfully so, as grooming questions are the most frequently asked of Bone Adventure staff.  “We’ve always been happy to be seen as an open and welcoming retailer,” Fulmer says.

For more information, go to www.boneadventure.com. 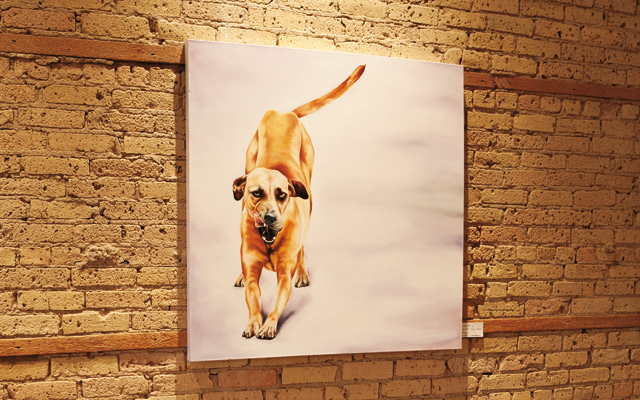