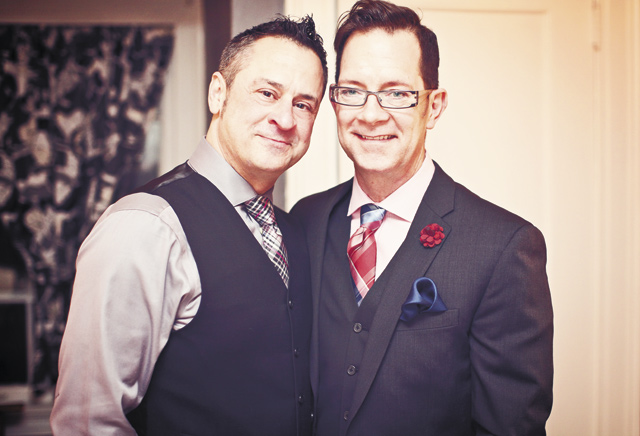 For a couple that had been together for over 25 years, marriage seemed like a logical step. However, in the case of Stephan Courtright and Michael Short, marriage was not legal – it seemed unfeasible. But with Minnesota’s legalization of gay marriage, what was once impossible became attainable.

For a couple that now had marriage options, Michael didn’t waste much time.  Stephan says, “I never thought we would get married but we were at the State Fair and I had just gotten Michael a beer at the International bazaar. We were walking across the street and Michael, out of the blue, asked, ‘Where do you think we could get married in Hawaiian shirts, shorts, and bare feet standing in sand?’” Stephan, surprised at the question, began naming Mexico, Hawaii, and other warm places without legal gay marriage. “Michael laughed and said, ‘No I mean here in Minnesota…’ So I started laughing and said that you can’t get married in Minnesota in February in shorts Hawaiian shirts and bare feet or we would lose our ‘Gay Card.’ I went to work to change his mind on the clothing.”

Michael’s account of the proposal is a bit more loaded with mixed feelings. “We have been together for over twenty-five years and I’d never thought I’d have an opportunity to get married,” he says. “So when the law changed it took me a while to wrap my mind around marriage. As a child of divorced parents, I had lots to think about. Those feelings and issues had nothing to do with my love for Stephan or our relationship. I just needed some time to work through them.”

Michael says the proposal was somewhat spontaneous and, although he regrets not making it more special and romantic, Michael’s main focus on getting married was that it occur on their anniversary.  He adds, “Just because the law changed, it doesn’t negate our relationship and the years we’ve spent together.”

It is said that everyone has a story to tell. But the tale behind how Stephan Courtright and Michael Short met is one that deserved special attention on the back of their wedding program (and even inspired the signature drink at the reception!).

No one would guess that love can blossom at a 7-Eleven, but the store located at Lyndale Avenue and 32nd Street served as the backdrop for this budding relationship. In the wee hours of Valentine’s Day 26 years ago, Michael craved one of his favorite vices: Häagen Dazs Vanilla Swiss Almond ice cream. Much to Michael’s delight, there was one carton remaining. As he opened the freezer door, an arm (that didn’t belong to him) reached in for the exact container he was so desperately seeking. 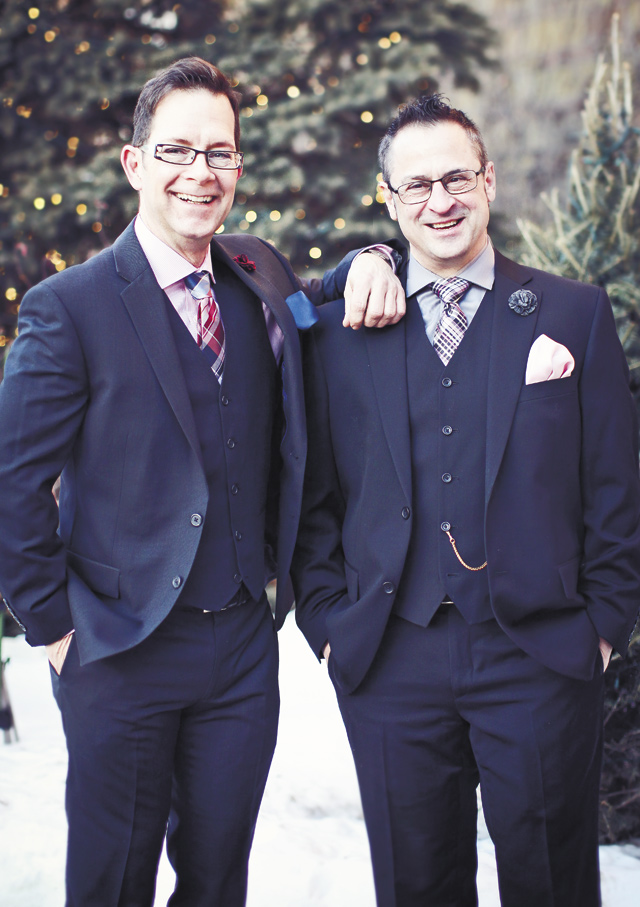 Michael turned to see Stephan, who, Michael notes, could have been in extreme danger. Standing between Michael and his Häagen Dazs has the potential to result in a lost limb due to an unfortunate freezer door malfunction. Luckily, Michael was struck by Stephan’s presence and didn’t resort to violence. Instead, he relied on the old verbal standby of “I saw it first” to which Stephan countered: “Possession is nine-tenths of the law.” Touché, Stephan, touché.

The sales clerk refused to act as judge on the dispute, resulting in the compromise of resorting to Stephan’s nearby apartment and sharing. Fast-forward to the summer of 2013, and suddenly the two men are faced with a wedding to plan.

Settling on a venue and vendors for a wedding can be an overwhelming experience. Stephan, who works as a hairstylist at Wave Salon, has received a wealth of information from clients over the years. As an advocate of supporting people and business that are friends, Stephan relied on family and friends whenever possible.

Michael took a different approach. “We knew the date, just not the year.  We started talking about how cool it would be to get married on 2/14/2014 but we had no idea about locations,” he adds. “In my mind, many of our vendor decisions would depend upon the venue.”

With a seemingly impossible dream of being married in a matter of months, the couple had settled on the idea of waiting until 2015 as finding a venue with such short notice was unlikely. Stephan shared this with a client and dear friend sitting in his chair, Lizzie, as they were discussing his engagement. When he went to the back of the salon to mix her hair color, Lizzie began texting. “When I came back Lizzie said, ‘Why not have your wedding at our house? We do not have any plans for Valentine’s Day. It will give us something to do and it will be our honor.’” Having caught him off guard, Stephan politely declined.

Discussing this gesture with Michael later, Michael agreed that declining was best. “I thought it was a gracious offer and said we should politely decline,” he says, “I felt uncomfortable with the idea of having our wedding in a friends home; such a thing can truly test the best of any friendship, and on top of that was the fact that Lizzie is a client of Stephan’s.” Michael sent Lizzie an email thanking her for the offer, but also declined, and the two thought this would be the end of it. 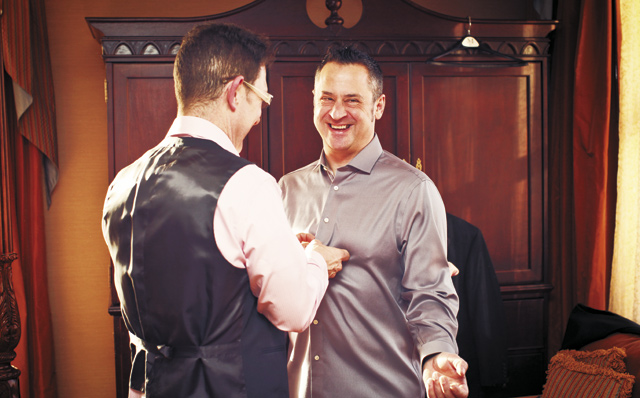 About ten days later, the couple received a beautiful, hand-made invitation in the mail. “It was an invitation to our wedding, from Lizzie, her husband Chuck, and their daughter Pia,” says Michael, who burst into tears as he read it. Unable to say no to such an offer, Michael and Stephan agreed to host it at Lizzie’s beautiful Tudor-style home. “We turned their world upside down, cleared out all their furniture and took over, and we never once had a conflict or problem. They were truly gracious hosts. If not for them I think we would still would be trying to figure out how to get married.”

With the venue issue settled, the two began melding two styles into a coherent look. “When it comes to style I usually defer to Stephan; it’s his business and he’s very good at it,” Michael says. “My original ideas about a casual barefoot wedding quickly morphed into something more stylish.  Especially after Stephan explained that a loud, Hawaiian-print silk shirt does not translate into a slimming look.” While the couple gravitated to elements of personal strengths, they always worked together. Discussing everything as a couple, they also talked to friends and family seeking advice.

While a coherent look and stylish feel was important, Stephan believed the two should have styles that play off one another yet remain unique. Notably, Stephan found fabric boutonnieres in a magazine and had to have them, ordering two different colors to prevent dressing identically.

Personal touches were added to the big day as well. Stephan says, “It was also very important to me to wear my father’s ring that my mother gave to him when they first started dating; he passed away awhile ago and I wanted a piece of him there.”

For Michael, this personal aspect came in the form of a family heirloom pocket watch, which required he wear a suit with a vest. “It may sound funny but it gave me great joy to have that element in our wedding. Something I could not have done wearing a Hawaiian shirt,” he adds. “I must also admit that I didn’t totally understand the funky socks, but they made for some fun photos and now I get it. Stephan saw the big picture in advance and that’s one of the many reasons I love him.”

That love has gotten the couple through nearly three decades together. After such a commitment to one another, Stephan and Michael found gifts to be unnecessary and encouraged guests to donate to charity (Stephan’s suggestion was Randy Shaver’s Cancer Fund while Michael’s charity of choice was the Minnesota Aliveness Project).

“Our wedding was not a celebration of the start of a life together,” Stephan adds. “It was a celebration of a long, loving relationship blending with the evolution of an increasingly enlightened society.”