A Night in the Life: A Queen on the Scene 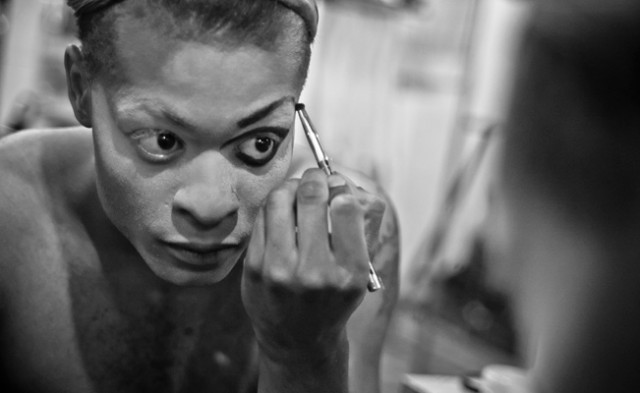 Photography by Simon The Photographer Stromberg at S3Photo

“GIRLS! GIRLS! GIRLS! Where is your music? Put it on my desk!” instructs Lily White, show director and emcee for tonight’s drag show at Town House in St. Paul.

“I put my music on the stove,” responds a quick-witted Camille Collins, a drag queen putting on her makeup in front of a floor-length mirror.

“We don’t have a stove,” Lily says, and the room, filled with half a dozen performers, erupts with laughter.

Camille smiles and Lily rolls her eyes. The dressing room at The Town House Bar is modest by itself—a small backroom in the basement with a few floor-to-ceiling mirrors, a couple of faux-wood tables, and a random assortment of chairs; but tonight, the bare space is transformed into a factory for one of the most glamorous subcultures of the GLBT community: Drag. I’m here early (6:45 for a 10:00 show) to catch a behind-the-scenes glimpse at the night’s performers getting ready. One by one, the queens pour in as their male alter egos, their female personas beginning to take hold as they enter: quicker, snappier, more glamorous versions of themselves. The dressing room is more than where the men become glamazons—it’s where they change identities for the evening, where they sharpen their wit with their “sisters” and “mamas,” where they gossip, laugh, and play.

For a drag queen, “sister” and “mama” take on versatile meanings. She calls her peers “sisters” when she considers them her friends; she calls queens who have had longer careers “mamas” in a show of respect. These terms might also signal a deeper relationship—a kinship of sorts; a “mama” in this context connotes her drag mother, a more experienced queen who offers mentorship to a young apprentice.

It’s easy to get lost here in a drag queen’s dressing room. It’s reminiscent of playing dress up as a kid, only bigger and more sophisticated: take a look around and see the likes of the stunning Brendonna, a transgender MTF from the South; or the dazzling Jamie Monroe, one of the veterans of the industry who has played the Town House the longest; we see, too, the likes of the classy sophisticate Anita Rivera; or the commanding presence of transgender Naughty Nikki; and in front of one of the floor-to-ceiling mirrors at the back of the room sits the impeccable Phaedra Simone, whom I’ve come here to interview tonight. The senses pique in this room as they transform themselves. The room smells like powder, makeup, and perfume. The room looks like the inside of a Disney princess fantasy—filled with sparkling sequins, clouds of makeup dust, and mirrors in every size.

And in the background, we hear music—from retro girl-power classics from Diana Ross and Whitney Houston to current Top 40 hits from Beyoncé, Rihanna, and the like. I feel as if I’m in a dream, until one of the sharp tongues around me brings me back to earth.

“Is that a wig or a hay bale?” Phaedra asks rhetorically.

The room erupts in laughter. The humor is sarcastic and good-natured—a ritual to sharpen one’s wit. “The library is OPEN!” someone yells, and the others agree. The drag community has its own jargon, and I nearly need a dictionary to understand some of the night’s conversation. “The library is open,” is used when a drag queen “reads” another drag queen (in other words, when a queen calls another out on her imperfections or directs her sarcastic barbs at one in particular). The act is also called “throwing shade.” Phaedra smiles after the exchange and returns to her mirror to tease her wig.

Jamar Jackson is 24 years old. He grew up in Chicago Heights, Illinois, and studied at the University of Illinois-Chicago for two years on a track scholarship. He finished his communications degree at the University of Wisconsin-Lacrosse, where he felt had a superior track and field program for his development. Jamar is an All-American track athlete, and it’s hard to imagine someone as masculine behind someone as glamorous as Phaedra Simone.

The world of drag is indeed deceiving to its observers. We see characters on stage from the campy to the glamorous—characters devised for reductionist entertainment, a welcome distraction from a slow night at the bar. Something new and amusing. But it’s more. For Jamar, Phaedra is an escape. Where Jamar faces adversity and has in the past hidden who he was, Phaedra represents strength—a powerful, sexy, vibrant woman through whom Jamar exercises parts of himself otherwise hidden from the world.

Phaedra is an escapist’s truth, an artistic illusion created to explore Jamar’s full reality. Since her birth, Jamar has become more confident himself. Drag in this context isn’t mere entertainment for rowdy gay bar patrons—it is an exploration of one’s identity, an escape, an art. Before Jamar entered the drag scene, and before he ever saw a drag show, he held a negative opinion on the idea. He ridiculed his first boyfriend in college for doing drag. “I said to him, you will NOT do drag or we will not date,” he recalls.

Jamar says he didn’t understand why his boyfriend wanted to dress in drag…until he saw a show for himself. Jamar found inspiration for Phaedra one night at the Gay 90’s after watching a performance by a drag queen named Shamika Dupree. He was in town from college, visiting his boyfriend at the time. The energy, the glamour, and the fantasy drew him in. He remembers thinking, “Why the fuck was I judging anybody for this?” After some coaching from Shamika, Jamar made his debut as Phaedra Simone in Lacrosse’s annual drag show in front of a crowd of several hundred. The night had him hooked, but it wasn’t until he met his “Mr. Big” that he came into his own as a performer.

Jamar and I met at my apartment in Loring Park for our second interview—away from the chaos of The Town House’s dressing room—to chat about Mr. Big and some of the more serious points in his life. He’s animated when he tells stories, and he often stands to act out some of his fonder, funnier memories. When Jamar talks about Mr. Big, his tone changes. His words, often quick-witted, become softer, more thoughtful. When I ask Jamar about how he describes his feelings toward Mr. Big, he pauses for a while and looks down for the first time in our conversation. His animated storytelling stops.

“It was how open he was, how he made me feel on the inside,” Jamar continues. “We did everything together.” Mr. Big embraced Phaedra Simone’s existence and was perhaps the first person who embraced—and encouraged—all of Jamar Jackson. Mr. Big bought Phaedra’s first expensive pair of stiletto heels, and for Jamar, Mr. Big took him on his travels around the world and “enlightened” him on how to appreciate art and culture. “He let me grow,” Jamar says. There is a long silence in my conversation with Jamar after he describes a few happy memories with Mr. Big.

He’s deep in thought, and then he reveals to me their most sacred moment. “We were on Lake Minnetonka. The stars were out. And it was just so beautiful.” Jamar’s eyes fill with tears, and he takes a moment to compose himself. “Alicia Keys’ song, Like You’ll Never See Me Again, was playing. And it was just so romantic. It was just so incredibly romantic.” Mr. Big’s influence on Phaedra and Jamar is clear. Without him, one wonders if Phaedra would even exist as she does. His presence has given her an emotional complexity that makes her the compelling stage presence she has become.

Mr. Big ended his relationship with Jamar—and Phaedra—two and a half years ago while on a trip to Provincetown. Jamar found out about an infidelity and confronted Mr. Big in their hotel room. After admitting that he was romantically linked to a past boyfriend, Mr. Big dealt Jamar a devastating dilemma: “Would you rather me be with you and want to be with him? Or just be with him?”

“I took off all my clothes after he said that,” Jamar says, “And I went straight to the bathroom. I turned the water to hot and got in the bathtub. It was very hot. When I’m angry, my body is freezing cold, so the water didn’t feel hot, but I knew it was. I sat there for three hours. I was hoping he would come in and save me, but he didn’t. I was so crushed.” Jamar focused his attention on his studies at school after the heartbreak, but his tragedies weren’t over. He lost his 14-year-old cousin to suicide, and another young cousin drowned soon thereafter.

“There was too much going on in my head,” he says of the time. “I felt lost. I wanted to die…I needed to do something.” And he did. While in college, Jamar decided to funnel the dark energy behind his recent misfortunes into a way to help others. He pulled from his experience with homophobia and racism to create a 30-minute Powerpoint presentation on homophobia in athletics, racism, and bullying in general. He spent months assembling the project and sent it to two local high schools, hoping to deliver the presentation to students. Both schools turned down the opportunity, citing its graphic nature. He put the project on hold, frustrated with the schools’ narrow-mindedness. “I still want to work on it,” he says, “but I don’t know how to bypass ignorance.”

“You have to be your number one fan,” Brendonna tells me as she applies makeup in The Town House’s dressing room. “And you better believe I’m mine, honey,” she says. She laughs at herself and smiles. Her comment, as witty as it is, leaves me with a sense of warmth. It’s as if, through her humor, she’s encouraging not only herself, not simply making the other girls laugh, but imparting some wisdom she’s learned the hard way. The queens’ personas will climax on stage at The Town House tonight. They’ll channel their hardships into powerful performances of diva power-ballads and high-octane renditions of dance music. They’ll make the audience laugh with their cleverness and impress with their creativity. But appreciation of their backstories will go overlooked, with the exception of a few dollars tipped here and there, making them some of the most undervalued artistic pillars of the GLBT community. Asked for what advice he might give to others, Jamar culminates the drag subculture into five words applicable to us all: “Live, love, and be fabulous.”

*Writer’s note: Drag queens don’t steal the scene by themselves! Drag kings also perform at The Town House. Watch Phaedra and her sisters (and brothers) perform Thursdays, Saturdays, and Sundays. Phaedra acknowledges her drag mother, Sasha Rodgers, and her sister, Vivi Vuitton, for their support.