Some of my absolute favorite remodeling projects are kitchens. There’s just so many possibilities, cool gadgets and accessories to think about. Some may find this overwhelming, but I can’t wait to dive in.

When I first started thinking about changing the kitchen in my personal home, the idea was to simply open it up to the adjoining spaces and to update some of the finishes. This is typically my initial approach when doing home improvement projects for myself, “just a few inexpensive tweaks and it’ll be great.” But, soon ideas start to flow and enthusiasm, like a drug, takes me to the Emerald City of remodeling projects.

My one missed step when planning my kitchen project was to think I could design it myself. With over twenty years of remodeling experience, I felt this was a reasonable assumption. But I found I couldn’t see beyond the kitchen layout I had been living in for so long, thus I was unable to visualize the potential of the space. I invested in a kitchen designer and he took a totally unexpected approach and came up with a design that was far superior to what I was thinking.

We remove the wall between the kitchen and living area and expanded the kitchen into that space about four feet. By extending the lower kitchen ceiling into the living area, and leaving the vaulted ceiling above, a lighted display alcove was created above. 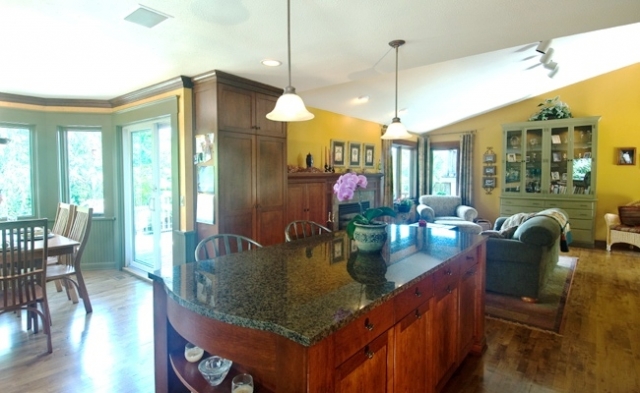 All of the cabinetry was removed and a new maple floor installed throughout the entire level to create continuity and flow. The new larger kitchen afforded us space to create a large island (primarily for buffet style gatherings for my wife’s large family) and a built-in pantry. The new cabinetry is a dark stained cherry with a crown detail I came up with while designing the new living room mantel. Counters are Tropical Brown granite with a tumbled stone backsplash.

The inspiration for the overall color pallet for the new spaces, including the green wainscot and millwork in the dining area, was inspired by a trip to the North Shore during the fall color season. We love the warmth and homey feel of the rich deep pallet. 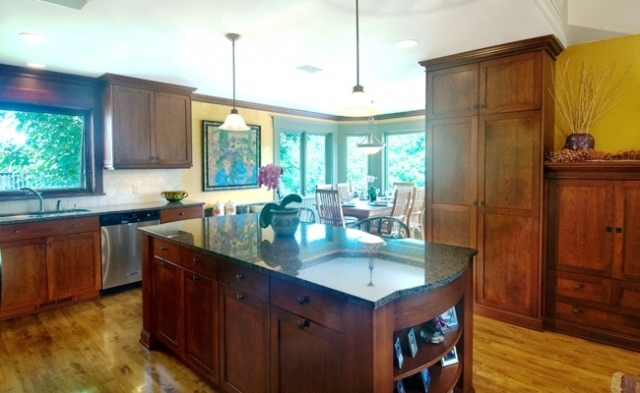 It’s been seven years since we made these changes, and there’s never a day we regret making the investment. Sure doing dishes in the laundry sink for three months was a pain, but the joy and satisfaction of making something our own makes it all worth while. Does your kitchen space need a lifestyle change?