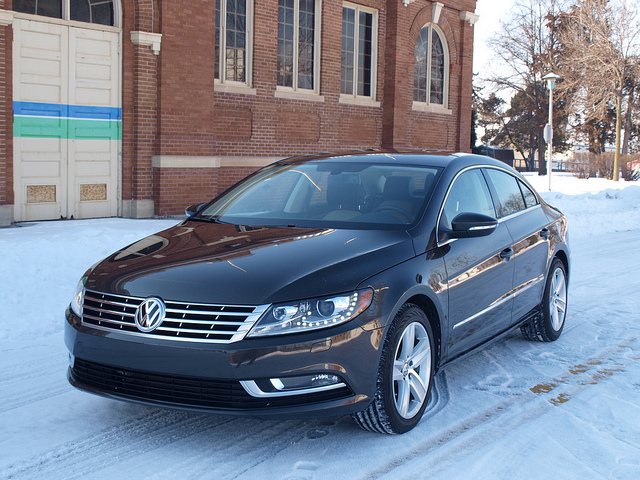 What exactly is a four-door coupe?

Before we look into that, we must understand what a coupe really is. Merriam-Webster defines a coupe as  “a 2-door automobile often seating only two persons; also : one with a tight-spaced rear seat.”

The idea of a coupe has stretched over time to include two seat sports cars to big luxury two-door barges. You could actually seat six or more people in one of the latter. In 1999, General Motors introduced a Saturn S-Series coupe with a third door. The trick is that the third door is hinged from the rear fender of the body. Then, both Saturn and Mazda introduced a pair of four-door coupes – again, both hinged at the rear of the body.

Though the old Saturn Ion and Mazda RX-8 offer up variants of a four-door coupe, the entire concept gets even more complicated. A true four-door coupe denotes that the rear doors are to be hinged at the B-pillar – which would appear to be more of a traditional sedan. The catch is the how the angle and height of the roof line is shaped in comparison with the rest of the body.

Volkswagen jumped into the four-door coupe fray in 2008 with its Passat CC. For all intents and purposes, the CC was essentially the sixth generation global Passat with a sexier body. The CC has been face-lifted for 2013 and continues to sit on top of Volkswagen’s North American car lineup – next to the big Touareg SUV.

On the outside, the CC fits the four-door coupe mold. It has a very low-slung body with all of the current Volkswagen design elements. The giveaway of its Passat roots can be seen up front – the wide grille angled as a doppelganger for the mid-sized sedan it shares its DNA with.

One would argue that the CC is much more handsome than its Tennessee-built cousin. There is something alluring about the CC’s low height and coupe-like stance. Even with the seventeen-inch alloys and low-profile Continental tires, the CC is simply a natural beauty worth looking at – even several floors up from the parking lot at work. 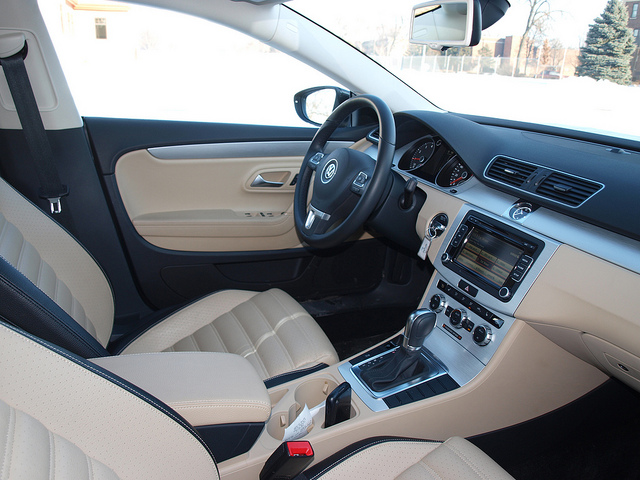 The moment you open up the door, the surprises begin. The fear of even considering a four-door coupe would be the perception of coupe-like space for all on board. This is absolutely not true in the CC. The driver and front passenger are treated to power adjustable leatherette seats, which are supported and decently bolstered. Adjustable lumbar support is added for the driver – for both height and level of support. There are plenty of adjustment options for many types of drivers – including this tall and somewhat wide one.

The real surprise is in the back seat. It is made for two adults – up to a certain height. If anyone is 6’2″ or taller, you will hit the roof. Legroom was surprisingly good in back. A couple of trips were made with four people in the CC, including people of all sizes and shapes, with no one complaining of any room issues.

The driver has a standard issue Volkswagen dashboard, which is one of the best in the business. Volkswagens are known for being straightforward and logical in terms of driver engagement. Instrumentation was well laid out with an informative center screen for trip and vehicle functions. The screen can be toggled through by one of the redundant switches on the steering wheel.

The center stack housed a touch screen audio interface that also has readouts for the climate control. In this Sport model, the radio featured AM, FM and SiriusXM channels along with Bluetooth connectivity for phone calls and playback of music files. Sound is balanced via the eight speakers strategically located throughout the cabin.

There is a climate setting that will come in handy in winter – a Max button for the front windshield defroster. When it is not enough to clear the window after an overnight frosting – the Max button will do the trick. 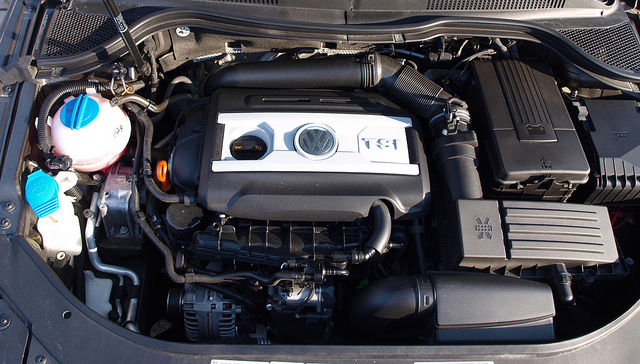 Once you slot the key into the ignition and give it a push, the 2.0litre TSI turbocharged four-cylinder engine comes alive. With 200 horsepower on tap, power comes on immediately and fluidly. You will never find any turbo lag in this engine.

One of the reasons for this fluidic power is the six-speed DSG transmission. In Volkswagen-speak, the DSG denotes a dual-clutch gearbox where you will find lightning-quick shifts in both automatic and sport modes. You can select gears through the Tiptronic gate to maximize rev control. However, if you wish to row your own gears and depress a clutch to engage them, the CC Sport with TSI engine comes with a six-speed manual gearbox standard. Either transmission sends power to the front wheels.

To understand the CC a bit more is to feel how it drives. Though it has the look of a sports car and positioned towards the top of VW’s heap in North America – there is an elegant balance of these two worlds. The ride is balanced between smooth and firm. Give it a solid highway, and the CC will happily lap it. When presented with bumps and other road imperfections, the CC tries it best to absorb them – though not as smoothly as it could.

There is also some lean on banked curves, but the CC offers up a pretty neutral handling package. The Continental ContiProContact tires did their best to grip on several surfaces, though you could feel the traction control and ABS gather up the CC on snow or caked surfaces. Steering is quite sharp with a great turning radius and action. There is no play in the steering at center. Braking was decent in both normal and panic situations. Pedal feel was fine, but one would need to pre-brake on slicker surfaces to stop the CC.

One of the biggest surprises from the CC came in the form of fuel consumption. Considering this is a German-made four-door coupe with a turbocharged four and a dual clutch automatic gearbox, it may come as a surprise that it turned a mileage figure of 26.5MPG. This came from a perfect mix of city and highway driving. 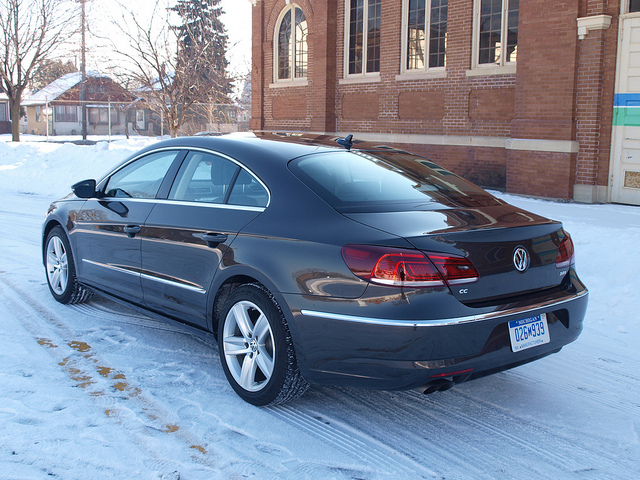 Because of the perception of four-door coupes, the Volkswagen CC will be a huge surprise to anyone looking for a sporty, low-slung sedan. Rather, it would be a good alternative to plenty of premium mid-sized sedans – such as the Acura TSX and Buick Regal.

So, what is the definition of a four-door automobile that defies convention and offers just enough room to compare with its more upright competitors? This Volkswagen will have to change Merriam-Webster’s entry for the sake of the CC.

Starting on March 9, the Minneapolis Convention Center will open its doors again to the Twin Cities Auto Show. This year, every automobile sold in the state of Minnesota is available for you to look and even experience. Interactive activities, such as the Ride-and-Drives and, new for 2013, Camp Jeep(c) – a guided your of the brand’s off-road capabilities demonstrated inside of the Convention Center. There will be an entertainment stage with daily performances for everyone! Our own automotive Contributing Writer, Randy Stern, will be at the Auto Show on Saturday, March 9 and Monday, March 11. For more information, log on to TCAutoShow.com for show times, discounted tickets and other exhibit and entertainment information. Also, see our Calendar section for dates and times when Randy will be at the Auto Show. See you at the show!