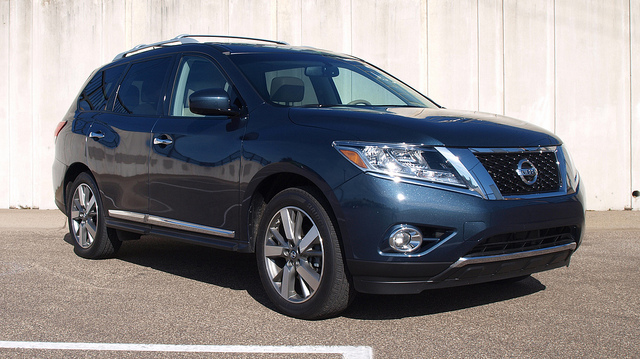 It has gotten soft in its advanced age, has it not?

That was one of the criticisms of the current Nissan Pathfinder. Once one of the toughest SUVs of its kind, the reception of it being just another car-like three row mid-sized crossover was lukewarm. It is handsome, but there were those who miss its rugged looks and outstanding capability off-road. They also did not get the memo that whispered: “psst…Nissan still sells the Xterra for that purpose.”

Obviously, the Pathfinder’s detractors missed the point. They missed the fact that it will never join its former brethren, the Xterra, into tougher territory again. They also feigned ignorance that Nissan needed a product to go up against the likes of the Toyota Highlander, Honda Pilot, Kia Sorento, Chevrolet Traverse, Ford Explorer and so forth. Those are the vehicles that sell – not rough and rugged SUVs that could be family unfriendly.

Arguments could fill a page, but will detract from the subject at hand. The reality is that Nissan chose the path of family friendliness and a front-drive skewed, unibody platform to continue the Pathfinder name.

How did it turn out for Nissan? Well…actually, not bad.

The Tennessee-built Pathfinder is stretched out on a mid-sized crossover platform with provision for three rows of seats. The look is accessible – meaning, it is handsome, easily recognizable and pretty much straightforward. The front end is bold, using Nissan’s tri-panel grille language used for its trucks and crossover/SUV productions. Headlights are big, complimented by fog lamps below in the lower grille. If you wish your Pathfinder to have command of the road, this design works.

Going reward is a straightforward three-glass profile with bold side flanks. All four doors open wide – something everyone would appreciate. The tailgate is huge and nice to operate. The wheels on this Platinum model are about right-sized with twenty-inch alloys shod with Bridgestone Dueler tires. 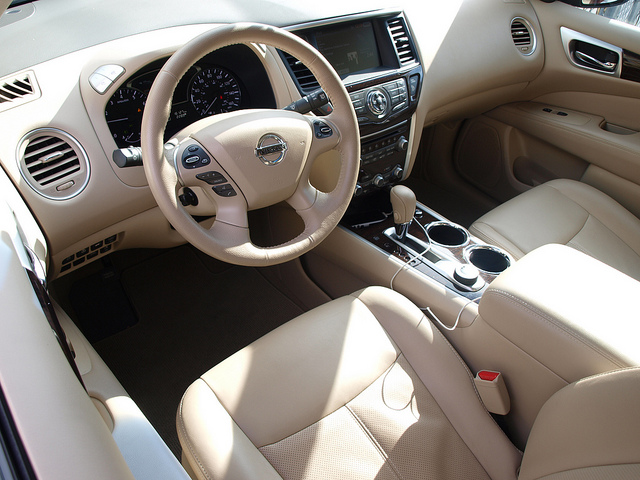 The term “right-sized” best describes the cabin. Front seat occupants enjoy big seats with plenty of power adjustments, including lumbar. Seats feel a bit firm, even with creamy leather upholstery. Second row occupants enjoy adjustments for rake and recline. These come into play for access to the third row. Depending on who sits in the second row, the third row is best suited for children. Cargo space is expandable, though generous even with the third row seats up.

For the driver, it is a familiar set up for current Nissan owners. With backlit instrumentation, a small switchable TFT screen in the instrument binnacle and a big touch screen in the center stack, there is enough information for the driver to decipher while on the road. The rearview screen is exception, which includes views surrounding the vehicle through a split screen.

Controls are good, with the exception of the steering wheel. The flip button is fiddly, while it appeared that some audio buttons simply did not work from the wheel. Luckily, central stack functions are within reach of the driver for those features. The tri-zone entertainment system is wonderful and fills the cabin with channel separation and good connectivity and variety via USB, Bluetooth, DVD playback with dual screens for the second row and SiriusXM satellite radio. 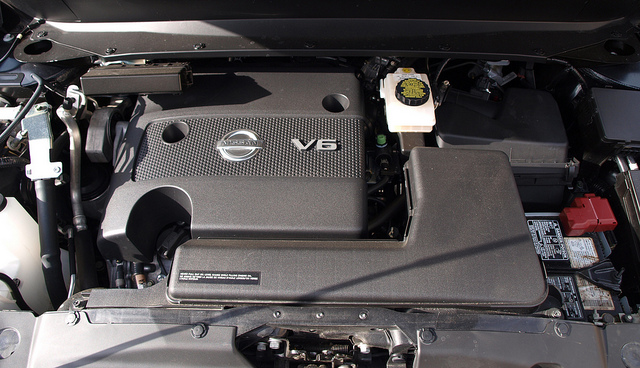 No question that Nissan makes one of the best engines in the world – the VQ series V6s. The VQ35 under the Pathfinder has 260 horsepower and 240 pound-feet of torque. It lives up to its accolades with smooth power and delivery. The standard maximum towing capacity for the Pathfinder is 5,000 pounds.

Nissan’s latest Xtronic continuously variable transmission is connected to the VQ35. Though the Pathfinder is now a transverse-mounted, front-drive model, they retain the term “4WD” for their system with power transferred to all corners through a knob on the console. A four-wheel drive Lock option is available when the going gets tough.

The one thing you will notice in the Pathfinder in comparison to its past is the car-like nature of its drive. It is softer now – much softer than before. That is evident in the solid ride that has car-like stability and smoothness in its suspension set. The Pathfinder absorbs various road surfaces better than its competition with the right amount of dampening and grip from its Bridgestone Duelers.

Going through the corners, you will feel some roll and lean. It is best to keep these turns at lower speeds, since the Pathfinder may come loose when make those high-speed interchanges on the highway. The steering is light, but not exactly sharp and crisp. You do get some on-center lock, but the wheel does feel a bit loose to turn. Brakes are decent in both regular and panic stops.

The advantage of having the Pathfinder on a car-like frame is an improvement in fuel economy. The average fuel consumption for this model turned out to be 19.9MPG. In comparison, the last generation Pathfinder with a larger V6 and less power averaged 15.3MPG.

Pathfinders are priced starting at $29,710 for a front-drive S model. This Platinum 4WD tester came in at $44,510. New for 2014 is a hybrid version of the Pathfinder available for all models except the S – starting from $35,970. The Hybrid features a 2.5litre supercharged 250-horsepower four-cylinder engine attached to an electric motor, a lithium-ion battery and regenerative braking.

Right off the bat, Nissan certainly did a good job in creating a three-row, life-friendly crossover/SUV. It is the exact vehicle for the times with our lives expanding – marriage, kids, pets, businesses, etc.

Of course, I will miss the capability of Pathfinders of yore. Yet, today’s go-anywhere families want something more comfortable than capable of going deep into the woods. This is where the newest Pathfinder will find favor.

Perhaps that is the best way to welcome the new Pathfinder as a big, three-row crossover.