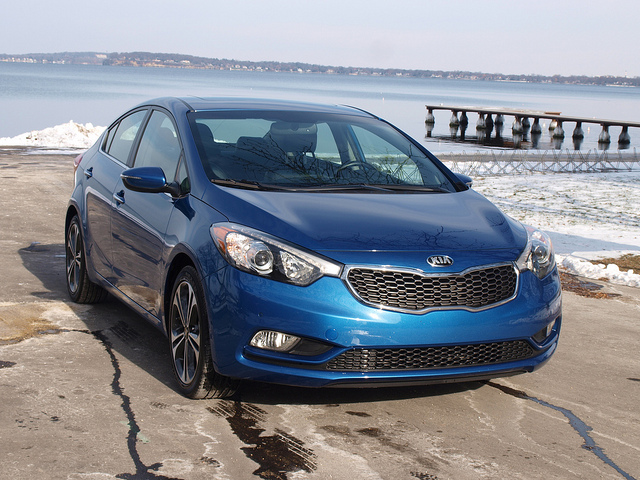 The Kia Forte is transformed. Its looks are undeniably sporty – almost coupe-like. You cannot deny another masterpiece of Peter Schreyer and his team at Kia.

But, what proof do I have to support these initial thoughts? Sure, my job is to not judge a book by its cover – even something as sexy as the Forte sedan. However, given the timing of its arrival and the want of something special, I took the Kia Forte on a holiday road trip.

How did the latest iteration of Kia’s compact sedan do given cold temperatures, three states of road and being away from home? Well…not bad, really.

Schreyer and his team created a compact sedan akin to a four-door coupe. It is low, but enough height to climb in and out of without embarrassment. Its coupe-like profile is alluring at best. The “tiger” grille is well integrated between two big headlamp clusters up front. Out back, a huge LED surround frames a rear end that also speaks of aggression. In-between is that coupe profile that attracted me to this subject over the past year.

The top-end EX model adds some nice wide-open seventeen-inch alloys on Nexen low-profile tires. A bit of chrome around the greenhouse, giving it a touch of class. You could also program the side mirrors to fold when you lock up the car – unfold when you unlock it. 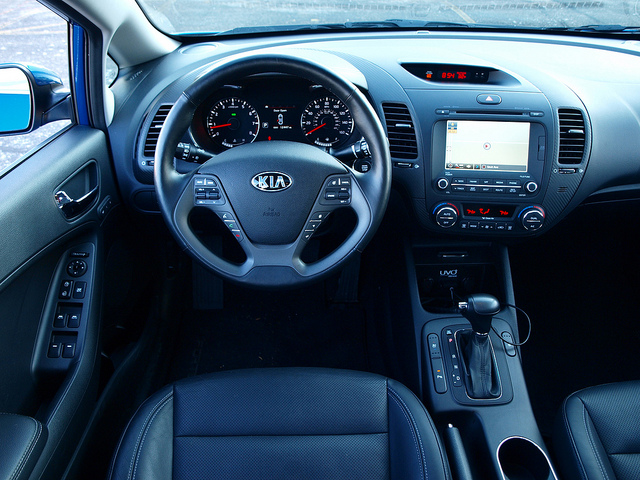 One could easily classify the Forte as a four-door coupe with its spacious cabin. Front seating offers plenty of bolstering to keep one locked around the bend. They are also comfortable and well upholstered in nice leather. Tall drivers should be aware of having to make several adjustments to fit legs and torso without obstructions to drive the Forte competently. Rear seat passengers get the same form of seating with less bolstering. There is plenty of legroom, though headroom would be a stretch for tall passengers.

Instrumentation is straightforward with both analog and LED readouts. A center screen in-between the speedometer and tachometer informs you of trip and fuel consumption figures, but only a few other functions aside from that. Controls are available for almost everything on two stalks and a plethora of buttons on the steering wheel.

The center stack lives the UVO infotainment system that includes navigation, SiriusXM satellite radio and Bluetooth connectivity. If you wish to connect your device via a wire, make sure you get Kia’s special cable for a bit extra. Owners could also utilize the UVO eServices app, which connects every aspect of the vehicle – including additional smart phone connectivity.

The Forte offers two engines – a 148-horsepower 1.8litre for the LX and the 173-horsepower 2.0litre for the EX. There is a decent amount of low-end power of the larger motor due to its 154 pound-feet of torque. A six-speed automatic is connected to the 2.0litre engine. Despite the lag in first gear, the transmission works just fine. All of this power is delivered to the front wheels.

When driving the Forte, understand that you are indeed driving a compact sedan and not a true four-door coupe. It is not a bad driver with a firm ride that has some compliancy on smoother surfaces. Drive it through some lumpy tarmac or some rough surfaces, and the Forte will react accordingly. Expect some tire noise on those indifferent and rough surfaces. Handling through the corners is near flat. Brakes are very good in both normal and panic stops.

On some Kias, you could adjust the steering feel through the FlexSteer system. With three settings to choose, the best would be Sport where the on-center feel ad turning weight works for more spirited driving. Though the steering feels heavier, you may find a bit of lag when needing a quick turn or maneuver. There is also an artificial feel when taking on the corners, but not enough to cause major alarm.

One issue that came up in the Forte was the combination of traction control and the factory supplied Nexen tires. At the end of its time, the Twin Cities took on several inches of snow. As a result, the Forte simply hated the unplowed surfaces. Perhaps a second set of snow tires would suffice, if you so chose the Forte.

For a compact sedan, fuel economy is a major factor when choosing one. Overall, the Forte EX averaged 30.4MPG. This is fine, considering the mix of urban, rural and interstate driving involved in this Thanksgiving road trip. Actually, it was higher than I projected! 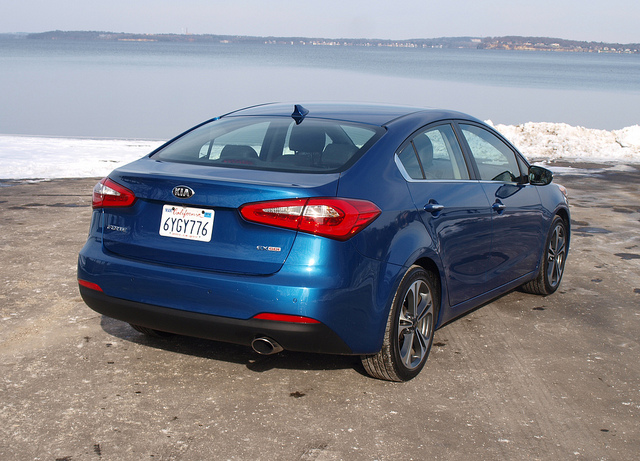 The Forte lineup starts off with a LX model with the 1.8litre engine and a manual gearbox at $16,700. This loaded up Forte EX stickered at $25,400 – the top price you would pay for one.

The Forte did well in its task of taking me along a series of old US Highways between Minnesota, Iowa and Wisconsin. It is not a bad choice in its class. It is in a highly competitive segment where each vehicle is getting distinctive in various ways. The Forte looks sporty and could be a good choice. Check everything out, however. That way, you made the right choice in the compact car segment.