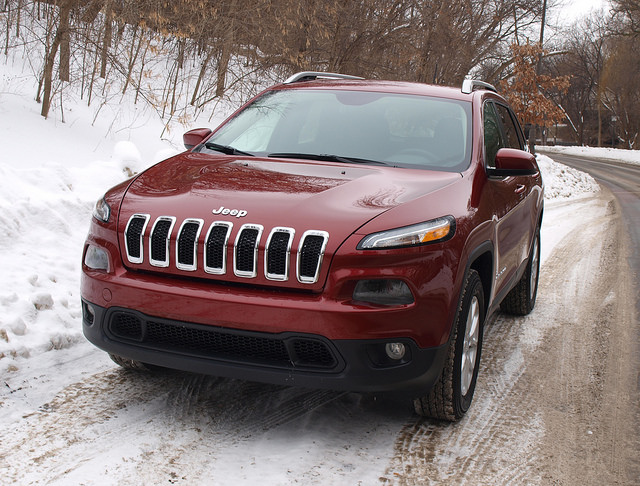 Has Jeep lost its soul?

This was the question upon the introduction of the Compass crossover (and its Patriot companion) back in 2006. The idea of a compact crossover with Jeep overtones threw everyone in a tizzy. That was until it was facelifted for 2011 – giving it a Grand Cherokee look and adding some needed “Trail Rated” components.

Did it work? Sales were up, but the bulk of the brand’s consumers went to the Grand Cherokee and the Wrangler. The latter being considered the definition of the Jeep brand.

The same question was brought up when images leaked ahead of last years New York Auto Show of the new Jeep Cherokee. All eyes focused on a nose cap that still featured the seven-slotted grille, but with a new shape and interesting positioning of the lights. The response was polarizing – ranging from extreme hatred to absolute and unconditional love.

The concern was not just about the face of the Cherokee. There were concerns that another front-drive biased Jeep would simple be relegated to only be a crossover without any capability that is expected from the brand. Ahead of its initial live appearance at the Jacob Javits Center, the Cherokee Trailhawk appeared on a video doing what Jeeps were expected to do – take on the rough stuff. 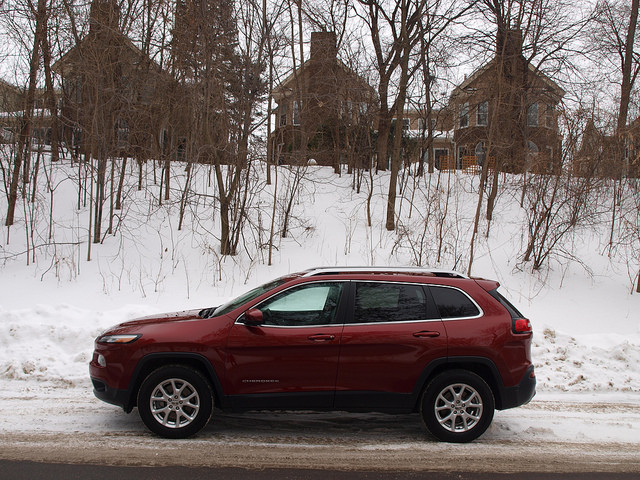 The Cherokee arrived with everything thrown at it – divergent opinions, initial quality issues with components and delays in production out of the Toledo North facility. Was this all worth it?

For starters, the Cherokee is a polarizing design. You could love or hate the front end or respond tepidly to the rest of the design. The fact is that you are paying attention to it. This is exactly how a vehicle should present itself. The overall design works because you are simply talking about it.

After a while, you get used to the front end and the rest of the exterior. However, you come to appreciate the lighting setup – which the combination works beautifully. It emits better light than the better selling models in the small crossover/SUV segment.

The Cherokee being tested is not the Trailhawk, but rather the volume selling Latitude. This model features seventeen-inch alloys with Firestone tires that have more than enough sidewall to manage anything. It may night inspire off-road use, but perhaps this model will instill some peace of mind that Jeep embodies in every day use – bad weather included. 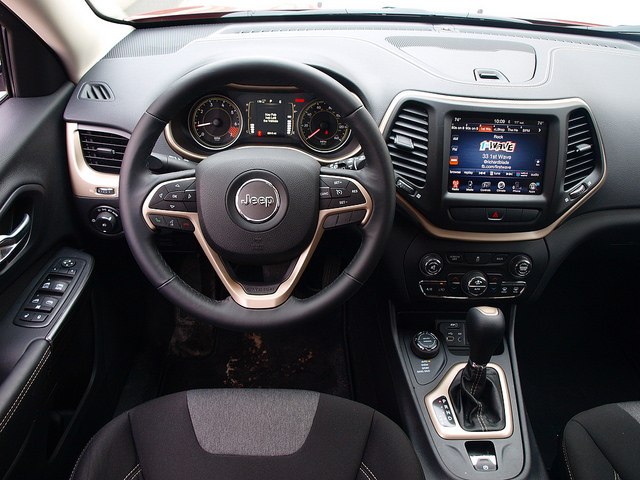 Where the Latitude wins is inside the cabin. The cloth seats are very comfortable and supportive. The cabin provides two rows of space for adults to enjoy the ride. Cargo space is quite generous with enough room for a family of four’s luggage on a nice, long holiday.

The Cherokee offers straightforward instrumentation that features analog speedometer and tachometer, with bar stripe fuel and temperature gauges. Trip and vehicle function readouts are courtesy of a switchable screen between the fuel and temperature gauges. In the middle is the UConnect Touch screen that is one of the fastest infotainment systems in the business. HVAC controls are found lower on the center stack, but you could always control your interior climate from the UConnect Touch screen. In all, the Cherokee’s interior turned out to be one of the best in its class.

This Latitude tester came with Select Terrain, a switchable system connected to Jeep’s Active Drive I four-wheel drive system. The knob on the console will start you off in Auto mode, before selecting specific terrain modes – Snow, Sport, and Sand/Mud. Considering the weather Minnesota had – alternating snow with near zero temperatures – the Snow mode came in handy. It controlled the Cherokee through the unplowed stuff onto cleared sections of road quite well. The rear axle would automatically disengage to maximize efficiency, but when the road conditions are less than ideal, the Cherokee was smart enough to keep all four wheels biting through it. 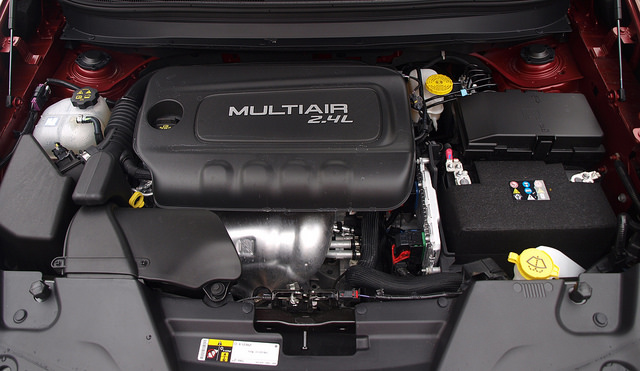 The new Tigershark 2.4liter four-cylinder lives under the hood of the Latitude. With Fiat’s MultiAir II induction system included, it delivers 184 horsepower with 171 pound-feet of torque. In-between the new Tigershark/MultiAir II engine and the Active Drive I system is ZFs new nine-speed automatic gearbox for front-drive applications. Though there is plenty of engine noise at low revs, it all quiets down at cruise. Freeway speeds keep the revs around 2000RPM, even at the highest ratios.

There seems to be something interesting with the new nine-speed automatic when going through the gears “manually.” It appears that some of the ratios are about the same, not allowing any difference in engine speed when shifting through gears six through nine. Would it be easier to simply six-seven ratios? Believe it or not, fears are not selected sequentially, but on vehicle speed and where the gear would fit better in motion. Yet, gear selection is quiet and unobtrusive – just the way we like our ZF automatics.

Cherokee buyers could opt for the new Pentastar 3.2liter V6 with 271 horsepower and 239 pound-feet of torque. You also get a choice of two additional four-wheel drive systems topping out with the Active Drive Lock 4×4 system. Where this is leading to perhaps is the most capable vehicle in its class – the aforementioned Trailhawk. Word on the street – and on the trail – is the Trailhawk is a monster anywhere you point it.

Though one would prefer the Trailhawk for their Cherokee – which is really what will sell this model – the Latitude is more for everyday use. To accomplish this, the Cherokee Latitude offers a smooth ride/handling mix. Potholes are meaningless where the suspension absorbs any road imperfection the Cherokee is thrown at. You will find minimal lean and roll in the corners and cloverleafs. Steering is perfectly weighted with excellent on-center feel. Stopping power in the Cherokee is also quite good in both normal and panic stops.

Considering climate change and extreme conditions up here in the Northern Tier, the Cherokee Latitude only managed 22.4MPG. You could get up to 31MPG with the Tigershark/MultiAir II four-cylinder engine. 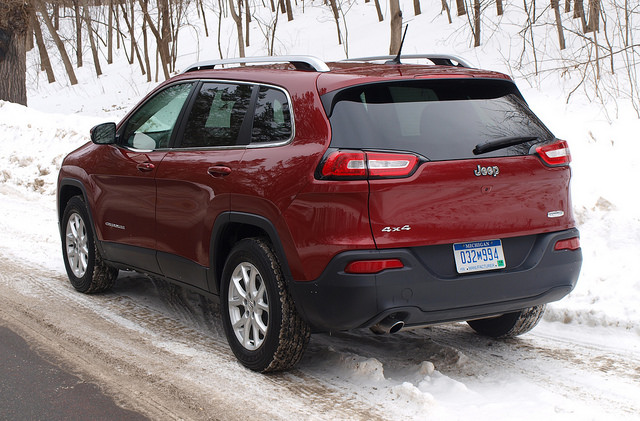 Cherokees start at $23,490 for a basic Sport model. Our Latitude tester came to a sticker price of $29,985. If you must ask, a properly equipped Trailhawk will set you back to $40,695. At that price, you could go to a premium brand compact crossover, though you will be sacrificing true off-road capability for prestige.

If you take the Trailhawk out of the equation, the Cherokee looks to be a leader in its class. Consider what the Jeep is up against and ask whether either of the contenders in the small crossover/SUV segment can match the capability of the Cherokee. The answer is simply no. They each bring something to the table, but to ask how far in the woods they could go – the Cherokee has already won.

About that new face and its polarizing design, when was the last time you saw someone dare to create something that provocative in its class? Form over function, you say? Mark one for the Jeep.

To answer the earlier question about Jeep losing its soul, it has not. Far from it! The new Cherokee raises the bar for a crowded field to follow – deep into the woods.