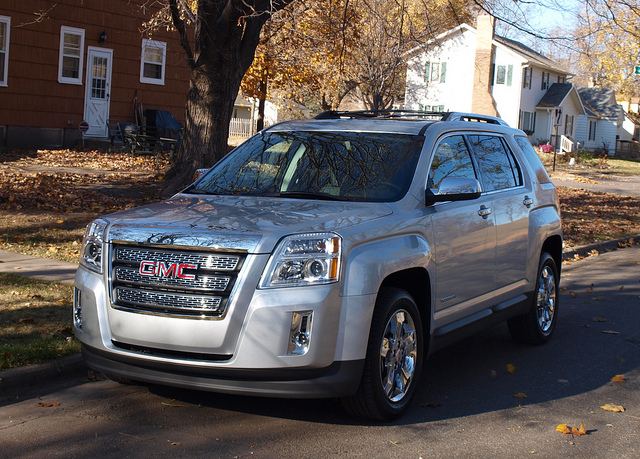 The question is no longer “what is a crossover.” It is “what size do you need?”

Since petrol prices scaled up to $4.00 a gallon nationwide around the first part of 2011, the North American automotive market saw a general shift towards smaller, more efficient vehicles. Benefitting from this downsizing shift is the small crossover segment. If you scour over the sales charts over the past 9-10 months, you will notice the astounding growth in sales of these smaller utility machines.

It is also a field that is getting a bit crowded. On the top of the segment’s charts are the Toyota RAV4, Honda CR-V and Ford Escape. These three vehicles practically boosted this segment’s profile from the onset. By the latter part of 2012, every manufacturer that sells vehicles in North America will have at least one to offer.

As a byproduct of the growth in small crossover sales, there are now niches within this segment. While Toyota, Honda and Ford rule the more mainstream sections of this class; there are now luxury models available for the more discriminating consumer. These luxury models are experiencing boosts in their sales figures – evidenced by staggering month-to-month increases by the greatly improved BMW X3.

When you have two distinct sub-segments within a market class, no one seems to be concerned about the “middle.” After all, the North American market had been divesting away from the middle of the market by eliminating entire brands – Mercury, for example.

The arguments are plenty as to the reasons behind diverging away from the so-called “middle.” Still, consumers want something that is not too pretentious…and not too plain, either. The BMW X3 is a wonderful machine, but it can be priced too dear for most families. The Toyota RAV4 may offer three rows of seats, but some consumers complained it’s too cheap and plastic for their tastes.

There is good news, however: The “middle” still exists and it lives right in the heart of the small crossover marketplace.

For the Professional Grade brand, the Terrain has been GMC’s biggest success story of late. Throughout 2011, the Terrain led the growth in sales for the brand across North America. Specifically, the Terrain was cited as the focus in the staggering growth of GMC on the West Coast.

What makes it such a success at this moment? The question is an open ended one. It lends itself to many different answers. It also points to some interesting hypotheses. Ideas ranging from the general shift from larger crossovers to smaller ones, the quest for an upscale small crossover with better value overall to whether this vehicle would fit a lifestyle that balances class with functionality. It is worth exploring the reasons why the Terrain has been experiencing such growth over the course of a year.

Looking back at how this vehicle came to be, the GMC Terrain was planned all along as a companion to the second generation Chevrolet Equinox. This was made easier by the cancellation of the Pontiac Torrent and, to a lesser extent, a very distant cousin – the Suzuki XL-7. It became clear that the GMC variant would not be simply badge-engineered with only a grille to distinguish it from the Chevrolet. 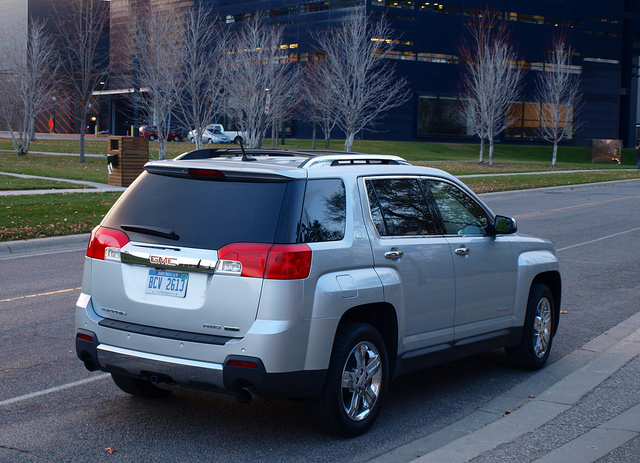 The designers at General Motors went for it. They created a stylish small crossover based on several GMC concepts and design studies to fuse the Professional Grade theme with a bolder, unapologetic profile.

The result is something that can only be judged by the eye of the beholder. One could dismiss it as plain ugly and very polarizing. I actually see beauty and elegance in the Terrain’s styling. It stands out amongst the crowd – just exactly what GMC wanted.

It’s not the shape that I’m drawn to. It’s the details. The grille texture alone gives a Denali-level feeling to GMC’s small crossover. The rear end is contemporary and bold. The wheel arches are squared off, exuding confidence as it goes about its business. The chromed wheels and grille inserts truly gave the Terrain a personality of its own. This is all summed up in one word: Shiny.

You might say the Terrain was loaded with fabulousness reserved for an A-Lister.
The Terrain is not for everyone’s eyes. But, if you’re tired of being bored by cookie-cutter crossovers or design elements cribbed from one another’s competition – the Terrain could be an improvement to your vision. 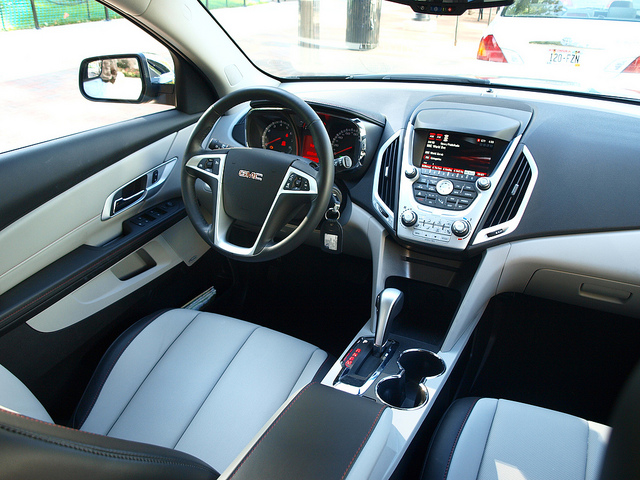 The same can be said inside the cabin. The leather upholstery was made for first class travel for five. To contrast either a two-tone Titanium or a monotone Jet Black hue of leather, red stitching is added. Red lighting also adds to the flair of the cabin, but it is also a GMC brand element.

The seats were taut, but very comfortable for long distance driving – as evidenced by my one-way run from Minneapolis down to Chicago. They were decently bolstered for the job and the leather certainly felt durable and supple at the same time. The rear seats were substantial with a couple of adjustments that would surprise most consumers. The seats can be moved back and forth, providing maximum legroom for passengers. The rear seatbacks also recline.

The SLT-2 tester came with the latest infotainment suite provided by GM. The touch screen system includes AM, FM and XM radio, along with the fine navigation graphics that are now part of GM’s infotainment package. Rear seat passengers also enjoy individual seatback mounted video screens with a remote control and headphones to enjoy their favorite DVD for the journey ahead. If you do not need the headphones, there are eight Pioneer speakers that would fill the cabin with your favorite soundtrack.

However, you do get a set of buttons on the center stack now commonplace in the latest GM vehicles. Compared to my previous experiences with similar button arrangements, I found this particular arrangement less intuitive overall due to its distance from my driving position. Luckily, there are a few switches on the steering wheel that are better put to use within reach of my fingers.

Access to the cargo area is done with a power-operated liftgate. You can actually set the timing of the opening and closure of the liftgate – or, turn off the power actuation completely. Frankly, I’d rather turn it off, because using the power operation is simply a “show-off” feature that has limited fun appeal after a while. However, if you have kids, and/or a pet and a bunch of thing to throw in the cargo hold – this feature is perfect for you. 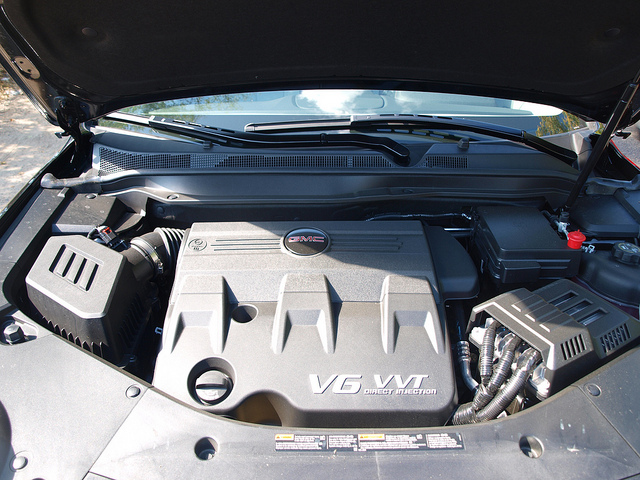 Under the hood is an engine that has been the bane of most vehicles GM sells: The 3.0litre High Feature V6 with direct injection and variable valve timing. Since it is no longer found on the Cadillac SRX and Buick LaCrosse, you can only find this 266-horsepower FlexFuel V6 as an option on both the Equinox and the Terrain in the North American market. Connected to the V6 is GM’s 6-speed automatic gearbox and, on this example, all-wheel drive.

Though the engine is beyond competent at speed, the 222lb-ft of torque exposed a lag in the lower gears when it had to play catch-up. I also noticed some performance difference while being fed E85 as well as a drop in fuel consumption. A fill-up of regular unleaded gave back some fuel efficiency and a smoother engine feel.

The Terrain’s ride was not exactly solid, but it was comfortable enough to manage road imperfections. There was enough dampening of the suspension not to shock anyone on board. The Terrain handled softly, but surely. I noticed a bit of a roll through corners when driven hard. Steering is sharp and tight, which will surprise many who are used to crossovers. Braking is very sure and the action is on point, but there were some moments when it rolled back after a full stop.

In the snow, the all-wheel drive system sends power to all four 18-inch Michelin Latitude tires for the grip needed to get through caked and iced-over roads. Add anti-lock brakes and traction control on top of the front-drive skewed AWD system and you can see why the Terrain (and its brother, the Chevrolet Equinox) have been the best choice amongst GM products this year.

One thing that blipped an alarm when driving the Terrain was the fact that the upright front end created a different kind of blind spot where one needs it – in front of you. If you’re driving out in the country or on the freeway, it does not pose a problem. Around town…or at places where there may be obstructions in front of you…the upright front end posed issues for those of us who are used to lower frontal fields of vision.

When I asked people who seen or actually rode in the Terrain what kind of fuel economy they would expect from a V6 version, that could run on both regular petrol and E85 and had all-wheel drive, they figured around 20MPG. In truth, fuel economy varied depending on what was feed into the tank. In all, a perfect mix of unleaded and E85 yielded an economy rating of 18.1MPG.

One can get a basic Terrain SLE with a 2.4litre ECOTEC four-cylinder engine and front wheel drive starting at under $25,000. However, to get one with the same specification as the SLT-2 I drove, your bottom line will come to slightly over $38,000. One would think that would be the price of a Terrain Denali, if one were available. At this point, this is as much Terrain as one could possibly get – save for the Forward Collision Alert and Lane Departure Warning option.

Being somewhat in the middle helps in GMC’s favor, but why would you want a Terrain? Is it distinctive enough for you to stand out in a crowd? Is it practical enough for you to carry people, haul a cabin full of stuff northward, tow small boats or attract your next ex-lover? 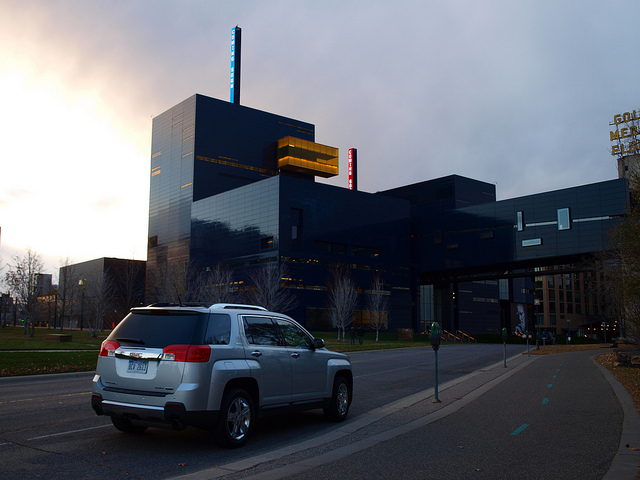 If you consider every scenario possible, the Terrain provided a comfortable, stylish and entertaining cabin to let the miles go by through Wisconsin and Illinois. Overall, the Terrain turned out to be a nice place to be – even out in the snow. It’s nice and shiny, but it has its detractions. Sometimes, those detractions could cancel out a vehicle from consideration. The best way to understand the Terrain is to drive one properly on bad surfaces. Small detractions could be seen as just mere details.

But, if you’re one who enjoys standing out in a crowd – and can handle the feedback – the GMC Terrain is your best shot at being noticed.

NOTE: This year will mark the 100th anniversary of the GMC brand – a conglomeration of two truck builders at the turn of the 20th Century that merged into General Motors. Since 1912, the GMC brand appeared on various types of vehicles from a version of the Chevrolet El Camino – the Caballero – to over-the-highway trucks to transit and intercity buses.