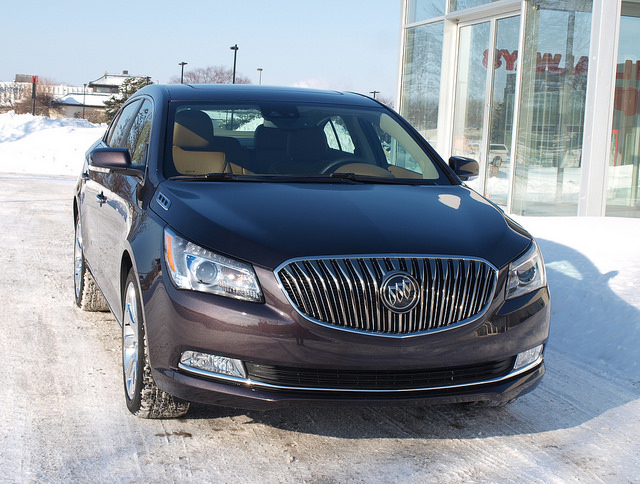 This is what someone said about the revised 2014 Buick LaCrosse during this ride review. The second generation LaCrosse presented a giant leap for both General Motors and Buick in terms of styling and significance. It had the heavy task of changing the demographic of Buick’s consumer base and to change the fortunes for the brand.

The LaCrosse also had global implications. Buick’s top market is China where the LaCrosse is one of the drivers for sales in that country. It is in a premium segment where it competes with the Germans for executives, party and government officials and entrepreneurs.

Buick’s global design teams went to work on a global mid-cycle refresh. The aim was to up the luxury and content, while focusing on improvements in the driveline. The result is an upgraded LaCrosse with its sights in leading the upper middle sedan market.

The first job to be done was to upgrade the exterior. The result begins with a larger “waterfall” grille using alternating vertical bars, flanked by multi-lens headlamp units with the requisite LED all-time lamps surrounding the main lenses. If you thought that the LaCrosse had presence, the revisions simply made them bolder.

The rear end gets redesigned tail lamps and a chrome bar flanking the upper middle of the decklid. That look reminded of another luxury car – one I cannot simply recall. Probably Asian in origin, but understand that such design would have to fly not only on this side of the Pacific…it would have to play well back in China.

Except for the newly positioned “portholes,” not much else was done to an already distinctive and alluring silhouette. The finishing touch comes from big chromed wheels shod with Goodyear Eagle RS-A2s. 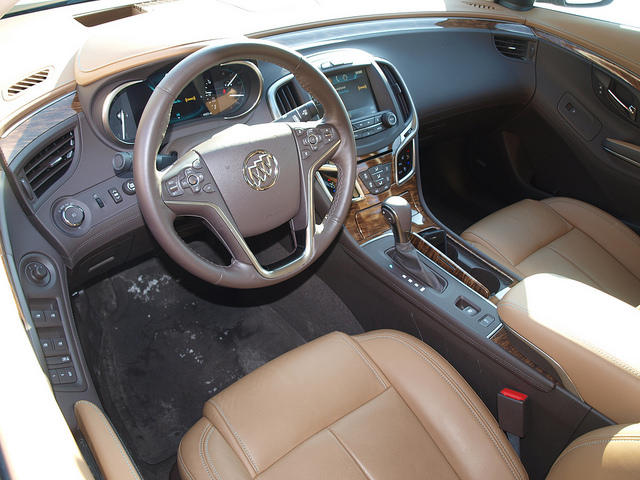 Step inside for a taste of Buick luxury – and you know it by the use of color and trim. They call it Choccachino. I call it lavish. There are two Earth tones with woodgrain trim and modern touches around. Yet, one discerning point about the interior is the use of an icy blue stitching on these Choccachino seats. I know this is a brand identifier, but I beg for better taste here – better color contrasting with the Choccachino/Cocoa interior scheme.

The instrument binnacle now features a static tachometer on one side, the fuel and temp gauges on the other. In the middle is a programmable center screen that is adjustable for speedometer, trip, fuel economy and vehicular function readouts. Buick’s Intellilink touch screen anchors the center stack now crowned with simplified switches and easier-to-understand controls. I wish I could say the same with the steering wheel switches, where a learning curve and new tactility strategies had to be conquered for the center screen and the audio presets to be managed.

Seating is comfortable, but finding a position took a bit for this tall and somewhat wide person. Frankly, I am not Shaquille O’Neal, but I did find a comfortable place behind the wheel that did not invade the rear seat. It took some negotiation between the sunroof and the floorboard to find said place to drive. The low roof does challenge tall drivers and passengers alike. The rear seat is no exception.

If you must know about sound, the LaCrosse had Bose’s Centerpoint system onboard. It offers up a wonderful sound as it fills a very quiet cabin.

The LaCrosse’s best engine is the 3.6litre V6 – powering this tester. You feel all of its 304 horsepower as it effortlessly glides on the highway. The down side is that the V6 lacks enough low end to get out of many situations, but you simply do not hear or feel it. The V6 is connected to a six-speed automatic transmission sending power to the front wheels on this model. All-wheel drive is an available option on the LaCrosse.

The quiet ride is matched by a much better suspension setup than before. The LaCrosse simply rides with an even keel and glides over road imperfections – including freshly cut potholes. You could throw the Buick into a curve, but softly. Steering was exacting with good response from the wheel and stable on-center. Brakes were good, especially when the anti-lock system kicked in.

Active safety is the big win for the LaCrosse. This tester was equipped with a suite of features, including blind spot monitoring, forward collision preparation, a heads-up display, adaptive cruise control, reversing camera with cross-traffic alert and the Safety Alert Seat. The latter is perhaps the most effective – some might say intrusive – device of them all keeping you aware of any issues you might not be fully aware of. Putting all of this together made the LaCrosse one of the safest vehicles out on the road.

The week the LaCrosse was in, the Twin Cities was in the middle of a pattern where it would dump plenty of snow one day, then drop temperatures to below zero the next. This certainly challenged the StabilliTrak system, as ordinary turns were feats of survival on black ice or unplowed snow. Yes, the system was effective and kept the LaCrosse on the road instead of a snow bank or a ditch. There is a bit of concern when traction was needed and the system was not completely responsive in these extremes.

One thing not to do with the StabilliTrak system is to overcorrect. The tip on this is to simply let the system guide you away from trouble. Though, the optional all-wheel drive system would be more effective during this weather pattern.

The weather also affected fuel economy. A deep winter cold yielded a 19.5MPG average for the front-drive V6 LaCrosse. You could easily get 20-22MPG on the average during other times of the year. 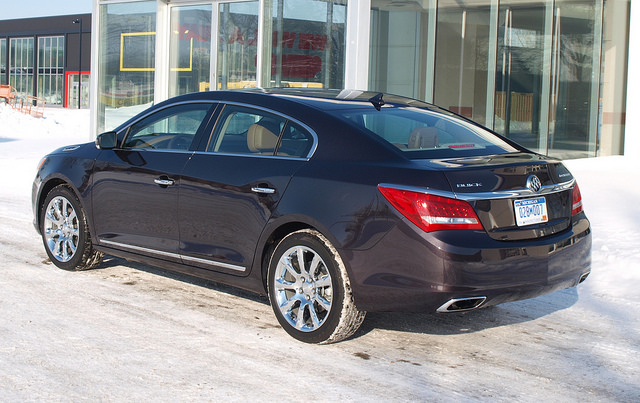 Prices for the LaCrosse lineup start at $34,460 with a standard model equipped with the four-cylinder eAssist system. This Premium I tester was loaded with active safety features and loads of luxury, coming to a sticker price of $45,595.

To say it is a winner is not too far fetched. It is quite an apt adjective for the revised Buick LaCrosse, which is really aging extremely well. The nips and tucks inside and out serve as ways to keep the big Buick relevant to its customers.

With more company encroaching on the LaCrosse’s field, Buick needs to keep this car fresh. Things are looking good to continue its leadership in its niche.