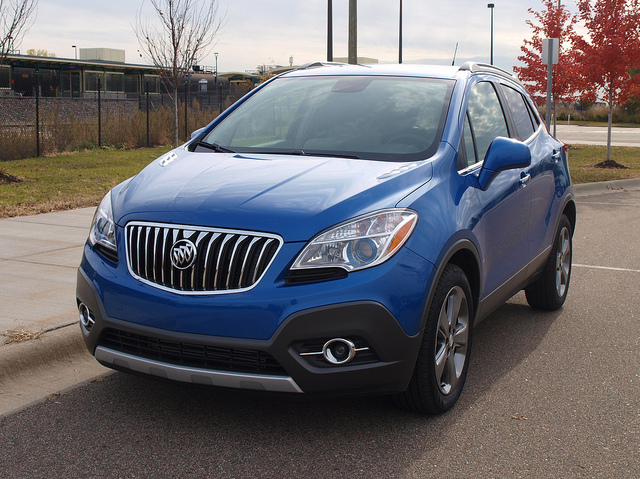 You are witnessing something that has never been thought of before. Something you would have never expected from a brand such as Buick.

What we have here is a premium subcompact crossover/SUV – the Buick Encore. The first thing that came to mind is that the Encore is the smallest Buick in history.

Buicks are not meant to be small. That is, if you have not been paying attention since 2009. The reality of the brand is a global one – one that is a huge hit in China. It makes perfect sense for Buick to sell General Motors’ South Korean-developed small crossover with its waterfall grille, premium materials and Intellink infotainment system on board right here in its home market of North America.

By default, Buick is my brand within GM. It encompasses not only its own heritage of eleven decades, but has by default absorbed the heritage of Pontiac and Oldsmobile – the latter with familial and personal ties. So, a lot of skepticism has been placed upon this small Buick.

An old question is now raised: “Would you really rather have this Buick?”

On first sight, the general consensus was “yes.” It is a very handsome vehicle with undeniable looks. As compact as it may be, there is a lot of detail put together from stem to stern. Buick’s waterfall grille is nicely integrated with a global face that is almost interchangeable amongst the five brands that sell this vehicle. There are two sets of portholes on top of the hood – another sign of Buick’s design integration upon this vehicle.

Rearward, you will miss a few things. There is no rear quarter glass, but the rear quarters do offer some chance of visibility. Speaking of the rear, it is a very nice setup with integration of a deep liftgate and sizeable taillights. You might even find the protection plate in the rear and other details denoting a want of adventure – perhaps off-road. 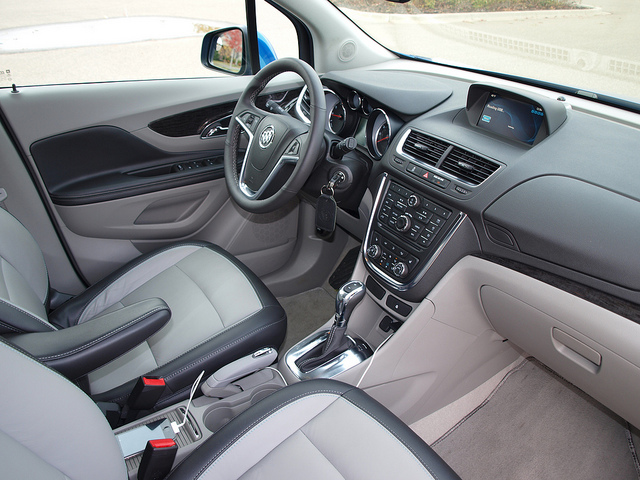 Buick’s design hallmarks are also found inside. The cool blue lighting, along with the Intellilink screen on the upper center, are welcome reminders of the tri-shield brand. The dials may have been lifted from the Regal, which is a good thing for fans of the brand. Some switchgear may also be familiar – including a massive bank of switches and knobs on the center stack. One such knob – controlling the tuner and navigation functions, would need some comprehending, especially when locking onto a channel of the radio.

Bose provides a beautiful noise inside the small-ish cabin. Intellilink facilitates satellite radio, USB or Bluetooth connectivity for both phone and music functions. The navigation system is the latest from GM, but the placement of the screen does not allow touch functions, as with other Buicks.

The leather seating is OK. You do get some bolstering in the cushion, but not much on the seatback up front. Power adjustments help, but long-legged drivers may be aware of their positioning behind the wheel with the pedals and the hip angle to the cushion. You might end sitting tall – very tall.

Rear seat passengers may have some room. The Encore’s cabin is more suited to average adults or a family of four. Rear cargo space is pretty decent an expandable. The cargo cover is perfectly suited to hide your valuables or the day’s yield from the store. 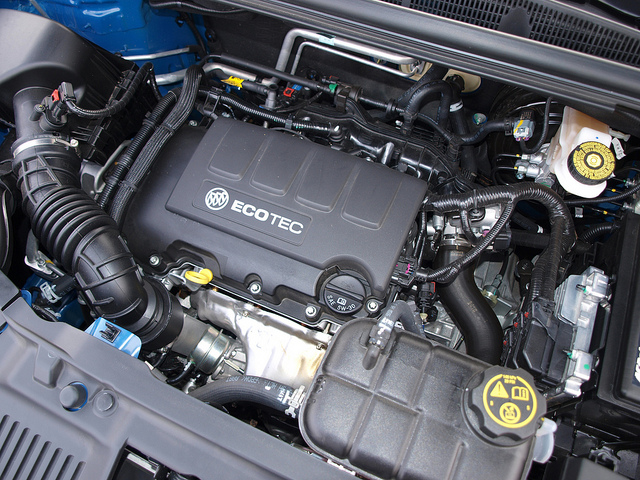 What motivates the Encore may surprise you. Buick uses GM’s 1.4lire turbocharged Ecotec engine connected to a six-speed automatic gearbox. With only 138 horsepower, you would wear there is much more under the hood. This is partly due to the 148 pound-feet of toque that responds well to your right foot. You will find minimal turbo lag overall, but on occasion, you might experience a long first gear if pressing the vehicle from rest to catch up with high-speed traffic. This model came with front-wheel drive. You could opt for all-wheel drive if you so choose.

Buick trumpets their QuietTuning experience, using noise cancellation, laminated glass and a good amount of sound deadening materials. It is almost as advertised – given the occasional engine sound, wind buffeting or tire bump. For the most part, this is small car you could actually hear yourself think.

Another surprise for the Encore driver is the balance of soft and solid in the ride-handling mix. Smooth and steady is how the Encore goes, even over bumps and cracks on the road. It will roll on banked turns, but not much when taking them at a slow rate. Braking is quite good in both normal and panic stops.

The steering action itself is light and pretty sharp turn-to-turn, but the wheel is a bit soft on-center at slower speeds. Once you get over 50MPH, the steering locked and sure on-center. Overall, you will find that the small Buick behaves quite nicely wherever you take it.

There is an assumption that its size would induce some good fuel economy figures. Good thing that the Encore turned a 31.0MPG average – the best of any crossover/SUV I have ever driven. That speaks volumes about this little Buick. 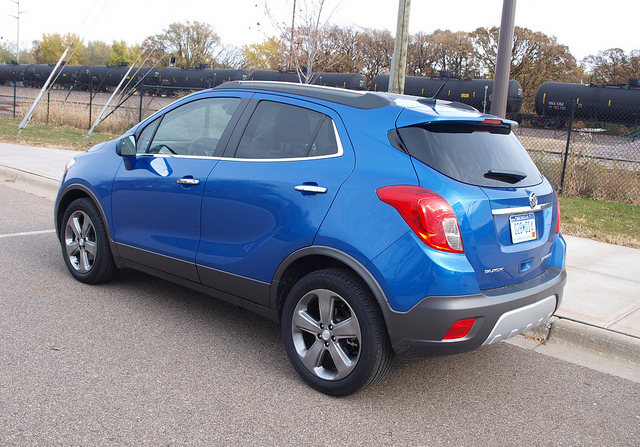 At what price would you pay for the littlest Buick? The Encore starts at $25,085 – This front-drive Leather Group model with a sunroof and audio upgrades stickered at $30,600. A fully specified model with all-wheel drive reaches up to almost $33,000.

That is a lot of money for a very small crossover. Yet, the point is being missed if you look at price alone. Buick wants a specific clientele for the Encore – urban, upscale, go anywhere, do anything and be anyone they want to be. They are ones that thumbed their nose at the MINI Countryman and Fiat 500L for being too quirky and the BMW X1 for being too expensive.

There is a twist, however. Buick owners are attracted to the Encore because it is simply a new kind of Buick. The attraction to the Encore is the idea of not needing that much room for everyone and everything – despite the sizeable and expandable cargo hold. Not only that – it is an eye turner. Where GM’s global design succeeded is giving the Buick brand something people want to know more about – even on first sight of the waterfall grille.

“Would you really rather have this Buick?” If the lifestyle fits, this could your ticket.