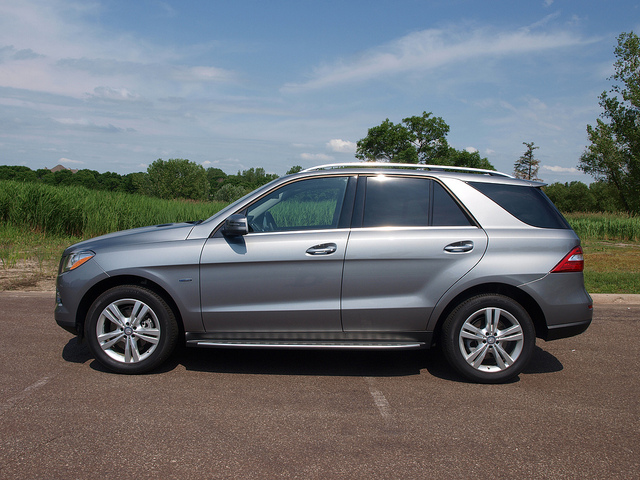 This is the one that really started it all.

Throughout the 1990s, the SUV craze took hold on the American motoring scene. It began with the perception that if you civilized something that resembled a Jeep, you could make a mint for families who were bored of minivans. After seeing Jeep secure their future through the 1984 Cherokee, every auto manufacturer felt compelled to make one.

It was not enough that the average American family wanted a SUV. Upscale families wanted their fair share, too. To fill that need, luxury brands raided the lineups of the mainstream brands to plug their lineups. Simply, they had enough finished cowhide and electronic gadgets to sell to anyone wanting a luxury SUV.

Mercedes-Benz already had such a machine – the Gelandewagen. They brought it to the USA as the G-Class to placate wealthy tastes until they had something for, well, everyone. That moment came in the late 1990s with a brand new SUV that actually felt like the rest of the Mercedes-Benz lineup. It also signaled a new era for the company.

The M-Class was introduced in 1997 to a somewhat surprised marketplace. The new mid-sized SUV became the first modern Mercedes to be built in this country when it debuted. A plant near Montgomery, Alabama opened up promising Stuttgart-level quality from every vehicle built there. Some pundits pointed out some flaws with the Alabama-built Benzes and questioned how much of the fabled quality tenets were lost in translation. Yet, the M-Class weathered the critics’ ire and became a global product loved by fans of Chelsea Tractors and patrons of St. Moritz alike.

There is a reason why most American buyers select the M-Class as their first Mercedes-Benz. The M-Class does what most of the brand’s consumers expect out of a “life-friendly” vehicle.

“Life-friendly?” Why, yes, a term that applies to whether something – in this case, a vehicle – fits into the life you lead. You can fill in the blanks as to how to define “life-friendly.” All we want to know is whether the M-Class is still the luxury SUV to get.

For 2012, the M-Class went through some serious changes to make it safer, more capable and better to drive. It certainly looked brawny; an adjective I found when describing SUVs of late. In its own Mercedes way, it was a handsome devil with a few bulging muscles to flex.

It is not without its detractors. Some of the people I talked to recently questioned the new design of the M-Class. One person thought it was the R-Class, a true crossover that is a larger wagon for those not wanting a full SUV. Several others did not like the way it looked. Fewer concluded that it might have lost its Mercedes-like presence with the new design.

Drawing further concern about the way the new M-Class had taken shape, on my evaluation drive, I parked next to a Ford Freestar minivan. From one look from the side, I swore the M-Class took the exact shape of Ford’s last minivan sold in North America, despite having a larger ground clearance and less interior volume. It is no wonder why there were plenty of concerns about the M-Class’ look.

To answer the lack of Mercedes-ness, there is a rule of thumb one must take heed of when questioning the design of the M-Class. If you can spot one a mile away – three-pointed star blazing in chrome – then, it is a Mercedes-Benz. Confidently, I can say that it passed that test. 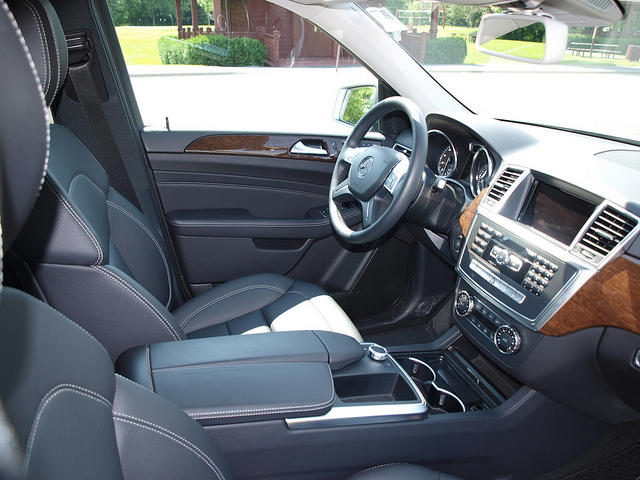 Inside offered up a very roomy interior, despite only having two rows of seating. For the M-Class, that is all you need. The front seats are huge and comfortable, while the rear seats can fit three adults across without complaint. I would even not even mind being driven while relaxing in the second row. After all, the black MB-Tex upholstery was perfect to the touch.

The driver was presented with a fine and thorough interpretation of Mercedes cabin tenets. The COMAND knob operated many functions – in particular the navigation and audio functions. Having feared these knobs, the COMAND was very intuitive and easy to use. The key readouts and dials were the right size and were easy to read on the fly.

The COMAND knob also controlled the audio system that featured the coolest radio readout ever. Think of it as an old Becker radio from the 1960s and 1970s evolved onto the upper video readout. This screen also housed a clear and comprehendible navigation screen and a rear backup camera. In case you were wondering – this audio system had the fullest sound I ever experienced in a SUV. This audio system came with HD Radio, along with Sirius satellite radio.

Cargo space was tremendous with a flat floor when the second row is folded down. There was no lip to navigate when lifting over boxes or luggage from the rear liftgate. 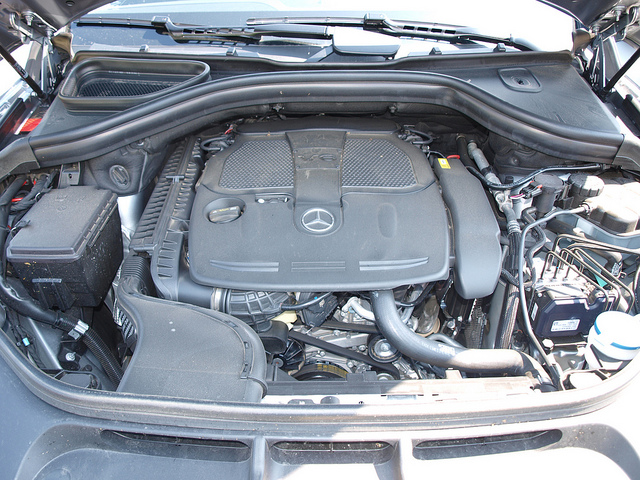 Under the hood of the ML350 4MATIC tester was the petroleum-fed, direct-injected 3.5litre V6. With 302 horsepower on tap, you depress the throttle to get motivated quite swiftly. With 4,735 pounds to move around, the V6 did a great job carrying the weight and then some. The V6 was simply relaxed – just the way we want our engines in our big SUVs.

In between the V6 and the 4MATIC all-wheel drive system was a smooth-shifting 7-speed automatic that is actuated by a stalk on the right of the steering column. If you want to control the M-Class’ motivation, there are paddles attached to the steering wheel to go through the gears. Otherwise, the gearbox was fine when left alone. According to the EPA, the ML350 4MATIC should turn 17MPG in the city, 22MPG on the highway.

Driving the M-Class was just about the same as any good regular-sized SUV – with a few minor improvements. The ride was smooth and supple with minimal road feedback. Certainly I have driven plenty of SUVs of varying ride quality levels, but the M-Class ranked up there with the better ones. There were some roll through the corners, but not enough to cause alarm. Handling-wise, the M-Class exhibited good manners despite its higher ride-height. Brakes were smooth with direct stops.

The real star of the M-Class’ driving dynamics package was the steering where speed sensitivity is quantified with some amazing tricks. Just when you think you could not make a U-turn, the steering cranked up the ratio and gave the M-Class a chance to get out of a tight situation.

The tester was very well equipped at over $57,000. Not exactly the best value in the market, but if you consider what you pay for in a Mercedes, it might be a justified buy. 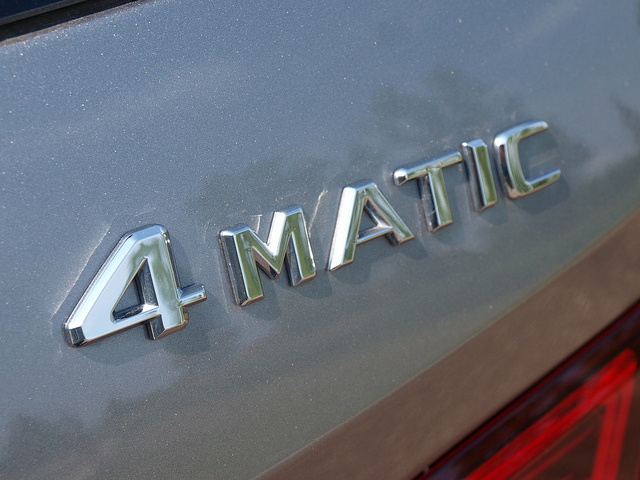 Justified the M-Class may be in terms of luxury normal-sized SUVs, it poses many questions for the average consumer.

The problem is that many of its competitors run the gamut in prices. A fully loaded mainstream SUV/crossover can top out at $45,000. Luxury competitors scale up to the M-Class’ sticker – or, possibly more.

What many consumers fail to see is that a mainstream brand’s product tops out in technology and equipment, while luxury brands continue to pour on even more stuff. It is not enough to have lane departure sensors to add lane departure warnings and a 360-degree camera viewing system. Plus, some may argue the degree of attention to detail and quality controls that go into a luxury SUV over a mainstream brand’s product.

The retort, however, is the call of snob appeal. Consumers would rather have the M-Class over a mainstream product because of the perceptions one has of the Mercedes-Benz brand. One cannot walk away feeling connected with its heritage, level of luxury and engineering prowess.

But, what if I told you that there was nothing truly special about the M-Class? The Mercedes-ness was there. You do feel the luxury when you climb on board the M-Class. Yet, it drove well, felt great and did everything it was asked to do without complaint or fail. It is a very good normal-sized, two-row SUV.

If there were one thing I would change from this tester, I would order the BlueTec diesel instead. The reason is solely fuel efficiency. A diesel powered ML350 BlueTec comes with the 4MATIC all-wheel drive system, which means I can still run one in a Minnesota winter. The other reason I would get the diesel: Long trips. The M-Class is a very comfortable and roomy SUV. If you had four of your friends along for an extended weekend hours away – Madison, the North Shore, the Black Hills of South Dakota, Chicago and so forth – the diesel’s range, coupled with four comfortable seats and more than enough space for everyone’s luggage, makes the M-Class a complete win.

Even without the diesel, the M-Class remains one of the strongest choices amongst two-row SUVs and crossovers.