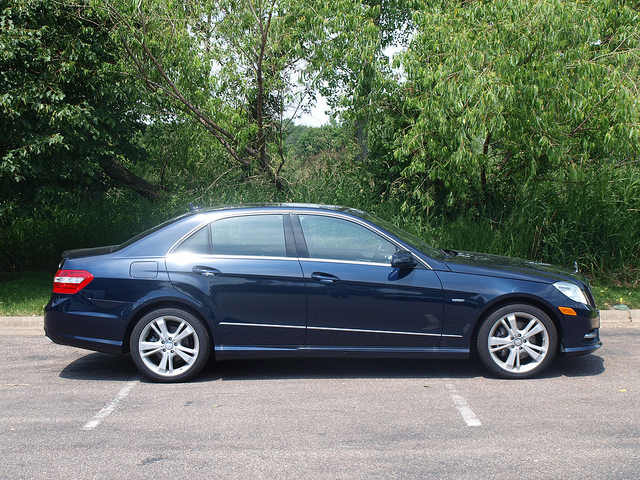 When the term “luxury car” is said, what is the first thing that comes to mind?

Let’s get this out of the way—your answer is correct. It is because we often throw a lot of brands into the luxury mix. When it is time to sort them all out, only a few nameplates stand above the rest. Each have their individual interpretation of what luxury is all about. Of course, they are all correct.

If there was some form of agreement on one brand that represents the essence of today’s luxury car, Mercedes-Benz is the correct answer to that question.

Why consider Mercedes-Benz above everyone else? Consistency. Everything Mercedes-Benz does for their products and their customers, especially in the USA, is to the highest level possible. This is the perception of the three-pointed star ever since it began to eclipse Cadillac and Lincoln on this soil back in the 1970s.

Today’s Mercedes-Benz shares a lot of the same tenets that propelled them to luxury car leadership a few decades ago. Sedans wear a modern interpretation of the radiator grille that is one of the trademarks for the brand. Sportier models have grilles that harken back to the great Gullwing SLs of the 1950s. Tail lamp clusters, interior designs and materials, side details, and engine bay configurations may have evolved over time, but they always point to a heritage that has only been imitated by others looking for the same aura and pedigree as the original.

The one thing that has not changed is the core of the Mercedes-Benz lineup. 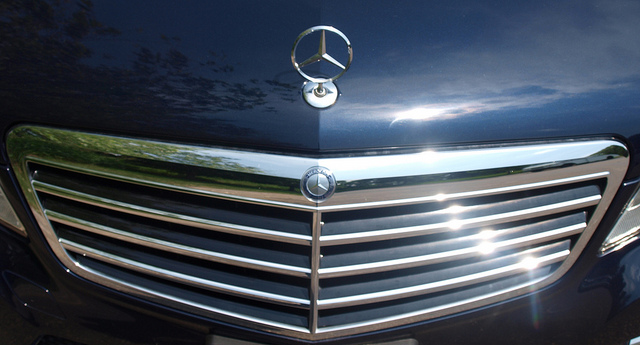 It is a vast lineup to begin with—15 different models on sale in the USA. In the middle is the essence of the brand. Not the flagship S-Class with every model averaging six-figures on the sticker. Not the best-selling C-Class, trying hard to eat into the BMW 3-Series’s dominance in the market. If you walk into a Mercedes-Benz showroom today, you are also welcomed with a wide range of coupes, convertibles, roadsters, SUVs, crossovers, wagons, four-door coupes, and so forth.

However, the core model of the lineup has always been a target for the competition. Every luxury brand is mandated to build a mid-sized sedan that can seat 4-5, employ about 300HP on tap, offer an all-wheel drive system, a powerful V8, an alternative fuel/propulsion option and a high-performance variant—along with other body styles to keep the consumer confused.

Ask any luxury car owner to point out the best of the best, and you would have quite an argument. In every argument, however, one car gets mention in every one: The E-Class.

Mercedes-Benz’s “middle” model has the longest lineage of the entire line. You can trace its origins to after World War II with every sedan that does not have the letter “S” on the trunk. If there was a standard-bearer for the entire line, the E-Class has to be it.

But is it? Is the E-Class still the finest mid-sized luxury sedan in the universe?

In classic Mercedes fashion, the E-Class exudes style and poise. The modern radiator grille and hood ornament make a statement of your arrival—something that still resonates with the E-Class. The rest of the design remained recognizable with plenty of modern touches. One cannot deny the place the E-Class has when it makes its way through traffic.

A particular term is apt when describing every aspect of the E-Class: “Right-sized.” If you look at its proportions and dimensions, the term simply fits. It is not too big or too small. The doors are about the right size. The trunk lid and cargo hold are as well. No wonder why it attracts the buyers of the BMW 5-Series, Audi A6, Lexus GS, Infiniti M, Acura TL, Jaguar XF, and, soon, the Cadillac CTS. 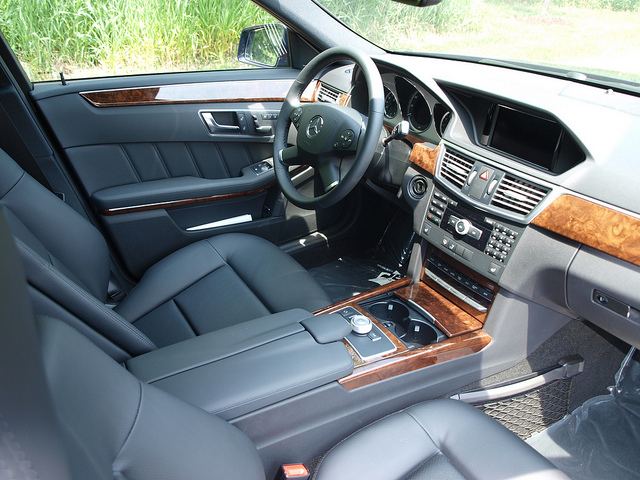 The inside feels “right-sized.” Four normal-sized adults would enjoy the space inside—a fifth person in the middle of the rear seat may be a push. This particular tester, the E350 4MATIC, came with an active multi-contour driver’s seat that had plenty of lumbar adjustments and other bells and whistles. It took a while to get comfortable after making several adjustments, including lumbar supports for the middle and lower back. Otherwise, they were big enough to accommodate most drivers. The tester was upholstered with the brand’s famous MB-Tex vinyl that almost felt like real leather.

The instrumentation arrangement and center stack were quite intriguing. The center dial has a TFT screen in the middle with various readouts ranging from radio frequency to trip information. The five-dial arrangement was elegant and simple to read, including a sizeable traditional-looking clock. Using the controls was relatively easy, save for the cruise control stalk, located above the turn signal in the E-Class. There were times when I reached for the cruise stalk instead of the turn signal.

Another complaint was the position of the steering wheel. In most vehicles, you would expect the steering wheel to be dead center to your torso. The E-Class’ wheel was a tad off-center to the right. Not exactly confidence-building, even for the enthusiast.

There was one control that saved the day for the E-Class: The COMAND system. Using the COMAND knob for the navigation and audio systems was intuitive and simple. Once you understand what the knob does in which mode—whether it is for navigation or audio selection—the knob comes in quite handy at the precise moment. Sound came from an optional harman/kardon 14-speaker system, which included Sirius satellite and HD radio. It makes a beautiful noise throughout the cabin. The screen for the AM/FM radio reminded me of an old console receiver from the 1930s—a classy touch that elevates the E-Class from the days when all you could get was a Becker Mexico radio in a Mercedes-Benz.

The E350 4MATIC tester also came with a petroleum-fed 302-horsepower 3.5litre V6 with direction injection. In the E-Class, the V6 simply felt perfect. It reacted accordingly to propel this 3,900-pound luxury sedan anywhere you pointed it. This is also due to having 273 lb-ft of torque at hand.

A 7-speed automatic transmission and Mercedes-Benz’s 4MATIC all-wheel drive system are mated to create a fantastic drive-line. The right column-mounted shifter stalk was straightforward and easy to use. For individual gear selection, you have paddles on the back of the steering wheel. Mercedes claims that the E-Class will get 30MPG on the highway, with a 20MPG rating for the city.

On the road, the E-Class was poised and ready. Curves were flattened out with almost no roll at all. The ride was balanced with some road imperfection feedback. Turning the wheel was amazing as the speed sensitivity allowed for tight and accurate turns to be executed just right. The brakes felt sharp and direct to the touch.

The basic driving dynamics seemed fine, but what if you wanted to get more response? There is a button on the console to push that switched from “E” (Economy) mode to “S” (Sport) mode. That changed the way the E-Class drove. In “S” mode, the engine opened up more, transmission shifts were crisper, steering response much sharper, and the suspension tightened to even out the curves and firmed up the ride without jarring your spine.

There is a catch to that button. You always have to switch it to “S” after you start the car. Most vehicles with such a button operate that way, which is quite annoying. I would prefer to drive an E-Class in “S” all the time. 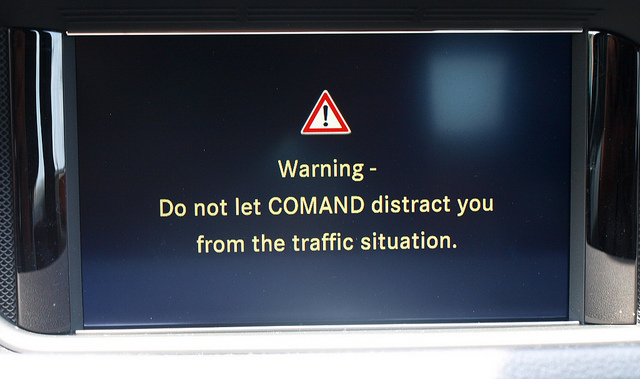 This E350 4MATIC tester came in well equipped at $60,480, including a panoramic sunroof and a Sport package. Realistically, this is exactly where you will see a bulk of the luxury mid-sized six-cylinder sedans price-wise. The price you pay for the badge may end up being a relative bargain, based on the value you get from the product. In that case, you simply cannot go wrong with the E-Class.

Or, can you? The competition is good, but choosing one in this class at this price point requires thinking about your place in the universe. Does it fit you, your needs, wants, and desires? Does it fit your lifestyle, position, employment, and community involvement? What about your pursuits, hobbies, and recreational activities?

Lastly, how does a Mercedes-Benz E-Class fit into all of the above?

Aside from being a very good car, the E-Class is truly an investment in your life. No one buys a Mercedes-Benz without some form of justification. However, if you can truly justify buying one with the iconic three-pointed star, the E-Class is your best choice.

After all, your answer is still correct.