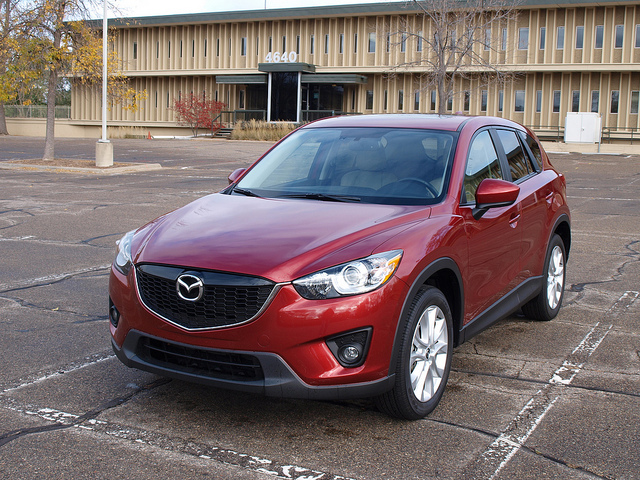 What captures your eye when an automobile drives down the road? Notice something different? Perhaps, it is something similar?

If you compare vehicles from the same manufacturer, you will find they employ a design theme – rather, a design language. The truth is that every automaker has a specific theme their design studios work from. From a certain point, every vehicle that is developed inside of these design studios employs elements of the theme to distinguish themselves from its competitors.

These automakers use some mystical name for its design language. Something that speaks to its theme – such as, “kinetic,” or “fluidic.” In the case of Mazda, they began to employ a design language called “KODO – Soul of Motion.”

The creative minds in Hiroshima wanted something to announce its independence from Ford. They wanted something that honestly speaks “Mazda” and “Zoom-Zoom.” The focal point of this new design language is the “signature wing” grille. From there, Mazda created a series of organic lines and textures that works with every vehicle in the lineup.

The first Mazda to wear the new KODO design language is also the bearer of another benchmark. Earlier this year, we reviewed the Mazda3 with the new Skyactiv engine and transmission. We knew that the Skyactiv driveline would appear on other Mazda models, but we did not know that there was more to this new approach to vehicle efficiency. Skyactiv technology was created to employ a more efficient and lighter chassis designed to work in concert with the engine and transmission.

It would seem appropriate that this first marriage of KODO and Skyactiv would come in the guise of a small crossover. Mazda went to work on a not-so-lumbering vehicle in need for a few more MPGs while carrying your entire life across town and beyond. The result is Hiroshima’s answer to a growing segment forged by the search of a way to hedge the fuel pump rollercoaster. 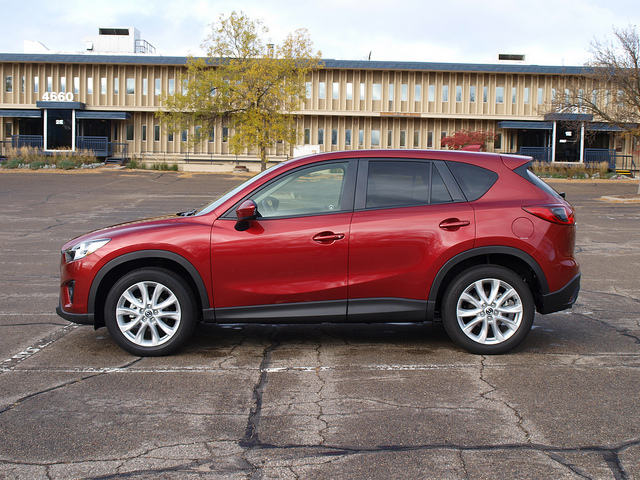 Getting to know the CX-5 is to see the Soul of Motion up close and personal. It starts right up front with the “signature wing” grille forming the focal point of a very dramatic front end. The remainder of the CX-5 simply flows from there. This crossover is quite handsome with a balance between its compact size and dramatic shape.

Some may argue that the CX-5’s overall design may be derivative from its competition. If you believe this is true, take a walk back to the front of the CX-5 and rethink this a bit more. Do another walk around and see where the KODO language goes. The fluid shapes that channel airflow provides a deeper silhouette from every angle. In all, it is a handsome vehicle to look at. 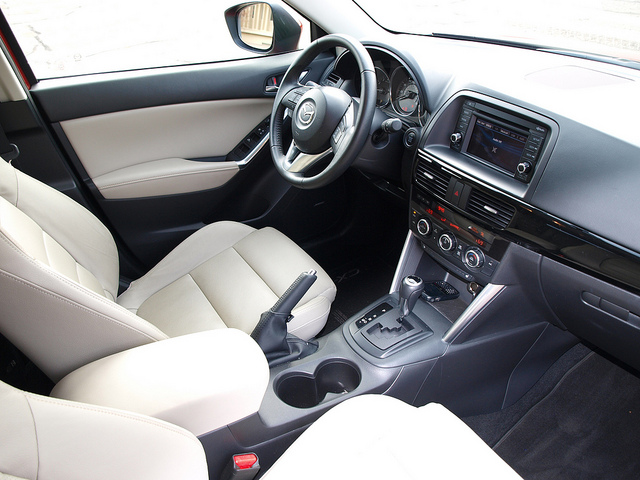 It may appear small on the outside, but the driver will step inside a roomy and straightforward cabin. This top-line Grand Touring model offered up leather upholstery and supportive front seats to make driving the CX-5 a pleasure. Though firm to the back, the front seats provided enough bolstering to get through the turns. Rear seat passengers get welcomed accommodations with a big, but firm seat that locks you in. Though the cargo area is already cavernous, the rear seat can by folded three ways with the middle back folding down for long, thin cargo.

In front of the driver is would be seen as a rather conservatively designed dashboard – for a Mazda, mind you – in the CX-5. It is, however, very functional and ergonomically correct. Three big dials greet the driver behind a nice, thick and multifunctional steering wheel. The right dial acts as a trip computer and fuel gauge, while the left and center takes care of engine revs and speed respectively.

HVAC controls are easy to use on the lower center stack with dual zone climate control. Switches throughout the CX-5 were exceptional to the touch. A huge plus is the level of quality of materials and switches inside the CX-5’s interior – the best enjoyed in a Mazda, period.

The upper center stack houses Mazda’s new TomTom-powered navigation system. It is a very easy system to get through, including the ease of connecting a Bluetooth-enabled phone and setting radio stations for both terrestrial and SiriusXM satellite bands. There is Bluetooth audio connectivity to play your music files, as well as USB and auxiliary jack options for your iPod or MP3 player. Sound comes through Mazda’s nine-speaker Bose Centerpoint speaker system – a beautiful noise to have along for the ride. 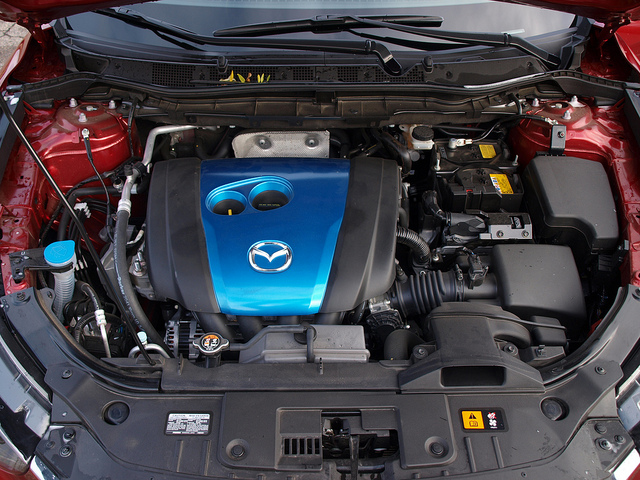 A Skyactiv 2.0litre engine appears under the hood of the CX-5. Though it has 155 horsepower on tap, the four-cylinder mill has a bit more mass to pull than on the vehicle this engine was introduced in – the Mazda3. In this class, consumers demand at least 20 more horses to work with, especially if you are considering towing up to 3,500 pounds. The 3,426-pound CX-5 can only tow up to 2,000 pounds.

A six-speed automatic is connected to the Skyactiv engine. The problem with this combination was how it managed the long haul. While driving from outside of Chicago back to the Twin Cities, the CX-5 could not relax as most of its competition would along this route. It had to maintain the revs at a higher-than-usual rate to keep up with traffic and lacked smooth transitions on uphill sections of the highway.

For the most part, the Skyactiv driveline, combined with all-wheel drive actually works in town and across the metro area. Though responsive when the throttle was pressed, the CX-5 was happier hopping from work to home to the club and at the store. It is quite eager to run when managing the daily grind.

Mazdas are known for great driving dynamics. The CX-5 felt like a Mazda in several areas. Ride quality is solid, given the lighter weight and quiet nineteen-inch Toyo A23 tires. Those Toyos provided plenty of grip on both wet and dry surfaces. The suspension absorbed road imperfects and bumps without compromising the cabin. On curves and turns, there was some lean, but it was controlled by a combination of McPherson struts up front and a multilink setup out back. Basic cornering showed no drama up front as it tracked its way from rural Interstates to in-town traffic.

Steering is weighted heavily, but for good measure. You can accomplish tight turns with plenty of effort from the wheel. On-center feel is good in the CX-5, keeping the compact crossover under control through both the normal and the curvy parts of the road. Stopping power is just right with enough stopping distance at both normal and panic stops.

Having the Skyactiv badge on the liftgate denotes the ability to get better fuel efficiency than its competition. The overall fuel consumption figure of 25.1MPG is not bad, but you can achieve better given the engine performance and its weight. It is, however, better than most in its class. 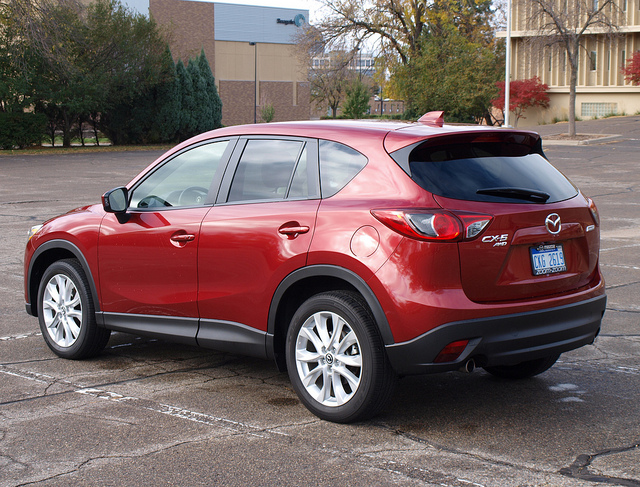 The CX-5 seems like a good proposition with its size, performance and the promise of efficient driving. Prices begin at $20,995, with a manual gearbox available for the Skyactiv driveline. However, you will not be able to engage a clutch when you get into the Touring model, but you gain almost everything else. In this top-line Grand Touring AWD model, the sticker reached $30,715.

All of this talk of Skyactiv and KODO may seem very mystical, but the CX-5 is a sign of a forging reality in the marketplace. Small crossovers are the bane of the automotive mix in our market. Whenever the choices expand, the consumer gets a headache.

The key to getting someone to buy one of these smallish crossovers is to be distinctive. The Mazda CX-5 pulls this off nicely. There is more to come with this smallish crossover – including the rumored Skyactiv-D turbodiesel engine. If (and when) this driveline arrives, the CX-5 would become a stronger choice against the likes of the Chevrolet Equinox, Ford Escape, Toyota RAV4 and Honda CR-V.

The CX-5 already won in every aspect – by taking a different approach to this popular segment. It is all because of two ideas: Skyactiv and KODO.