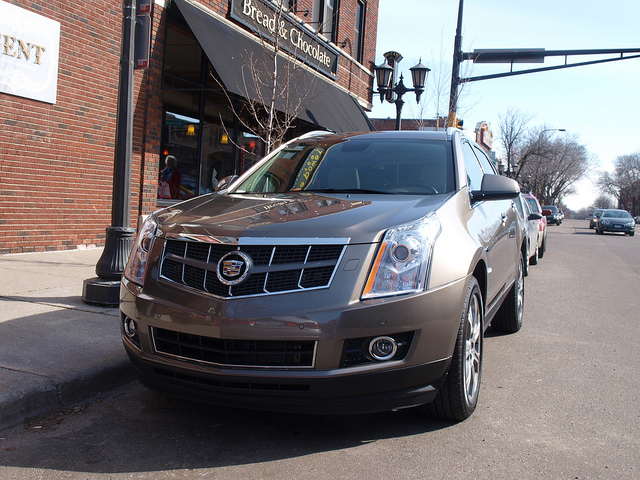 A long time ago, the tag line “Standard of the World” stood for something special.

Over 100 years ago, the Cadillac Motor Car Company earned the right to call itself a “standard” above all else by advancing the automobile on several fronts. In 1908, Cadillac won the Royal Automobile Club’s Dewar Trophy for demonstrating vehicle reliability with extensive use of interchangeable parts. Cadillac engineers disassembled one of their cars, built it back up again and drove off in it. Back in 1908, that was considered revolutionary. A second Dewar Award was earned in 1912 for Cadillac’s revolutionary key-initiated electric starting system.

These award-winning innovations are things we take for granted today. By giving the automobile a much-needed boost at a time when not a lot of people even considered one as part of their lives, we could appreciate Cadillac’s right to proclaim itself as the “Standard of the World” a century ago.

For decades, Cadillac was the best selling luxury car in the world. It retained its leadership by being audacious in every way. We recognize the fins of the 1959 Cadillac – and the staggering detail of every inch of that model. There had to be a point where Cadillac’s claim of being “Standard of the World” would no longer become relevant.

That moment came in the 1970s. Gas crisis, a recession and a change in consumer tastes became telltale signs that Cadillac’s relevance would begin to wane. All of the sudden, a generation of well-to-do consumers began to embrace more efficient and smaller luxury status symbols. Mercedes-Benz took advantage of this turn in the luxury car field as the Sedan de Ville was replaced by the S-Class.

Since then, General Motors has been soul searching to find a way to make Cadillac relevant once again. It began taking steps towards developing products that challenged perceptions of the brand. Not everything was a winner, but you could tell how much effort Cadillac was putting forth to not only become relevant again – but to become a global player in the luxury car market. 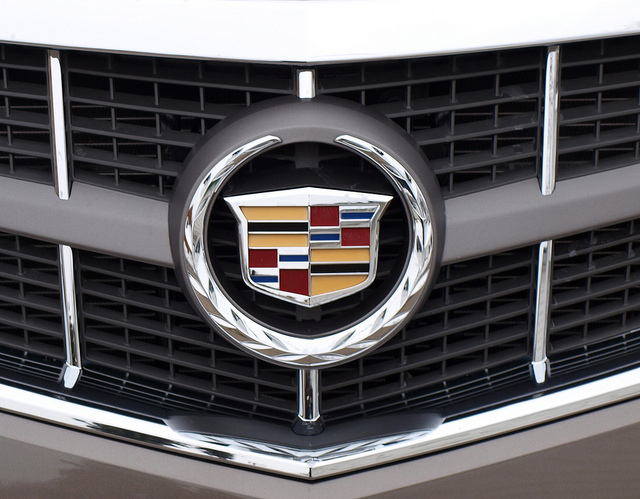 Since 2010, the SRX sat right smack in the middle of an evolving lineup for Cadillac. The brand’s signature Art&Science design language was translated elegantly onto GM’s global Theta platform. As pretty and luxurious as the SRX was, their engines bore the biggest complaints. While automotive journalists felt the 3.0litre V6 was too weak for this heavy five-passenger crossover, consumers weren’t convinced that the Saab supplied 2.8litre turbocharged V6 was the way to go. Cadillac had to do something to instill consumer confidence in its lavishly designed two-row crossover.

To resolve this problem, Cadillac dropped the familiar 3.6litre High Feature V6 under the SRX’s hood. This direct-injected engine sports 308 horsepower – more than any of the engines offered from the previous model years. It sounds like they resolved the problem in performance by creating a much better proposition for the consumer. But, was this the right thing to do?

Consider this fact: In February of 2012, SRX sales accounted for 43.3% of all Cadillac sales. It is currently the best selling product in the Cadillac lineup, a contrast to a year ago when the CTS held the same title for the brand. This could be considered a success, if the SRX was good enough to meet the lofty title of “Standard of the World.” There is only one way to find out: A cross-examination of the SRX.

This crossover certainly has the look of a Cadillac. The Art&Science design combined the best of the brand’s heritage with contemporary lines and themes. Some might say that for the past decade Cadillacs have become folded over, soulless devices. There are some angles that appear that way, but look closely…there are some “fin affects” in the front and in the back. The taillights took me back to 1969. The rear C-pillar windows have angles reminiscent of a Sedan de Ville, circa 1964. However, the front end and the 20-inch alloy wheels are indeed modern touches. 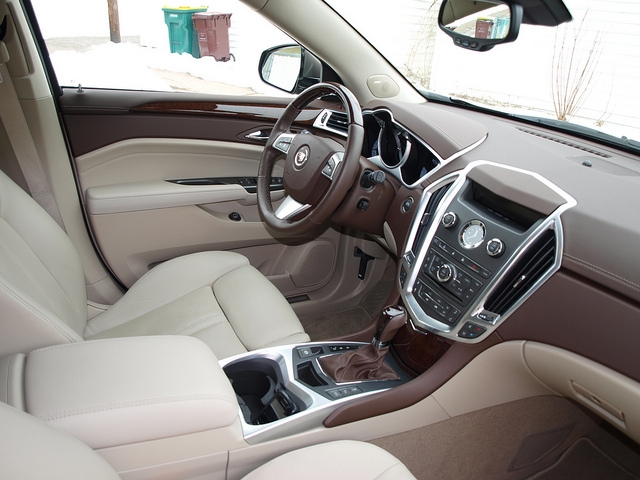 Inside continues the Art&Science theme. Cadillac thought it was great to have circular pods for its dials and a rise-up center screen for the center stack readouts. It still is, and the treatment is rather nice. The dials are black-on-white with an LCD screen in the middle of the speedometer pod. This is where the vehicle information readouts live – all beginning with a Crest-and-Wreath to welcome you.

The center stack has GM’s familiar field of buttons and knobs with the screen partially tucked away when you’re in drive or not using the navigation system. The screen does rise when you put the SRX in reverse with a camera showing you what’s directly behind you. If you do use the navigation screen, it is the latest touch model employed across all GM lines.

The SRX Premium tester offered practically everything imaginable short of the kitchen sink. You only get two rows of seating in the SRX – the front row seats are taut, but can be adjusted to compensate plenty of bodies behind the dashboard. Rear seat passengers get plenty of headroom and the seat backs recline. Yet, rear legroom may be sufficient for average sized people, so choose whoever sits where wisely when going on a long journey. Perforated leather drapes both rows of seating, while various leather and soft touch materials and decent carpeting cover the remaining parts of the cabin. For the most part, these seats could use some additional cushion for support and comfort.

Cargo space is immense enough to fit a kitchen sink and a faucet. In reality, it will pack a week’s vacation for four somewhere worth driving to. You can install the cargo fence along a u-shaped track to keep the sink and its components from crashing through the power-operated lift-gate. The fence is attached to the hatch that opens onto the sub-floor of the cargo hold and is installed into sliding pods on the track.

Another blast from the past is the Bose audio system. Though better than any Bose-powered system in previous Cadillacs, its eight speakers filter a beautiful noise full of AM, FM and XM radio or various options of sound ranging from CDs to your iPod. This SRX came with the only available option on the Premium model– a pair of rear seat video screens with your own controls and headsets. To add a more dramatic affect to your SRX, there is the Ultraview Sunroof that gives you unlimited view of the sky above for all passengers to enjoy. Keep in mind that only the front part of the roof opens up to let the atmosphere enter from above. 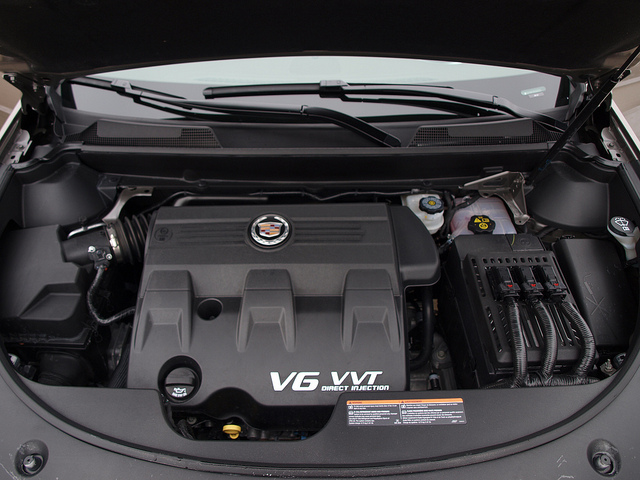 About that 3.6litre V6 – it is quite good. The job of hauling about 4,400 pounds takes all 308 horses to master. In comparison to GM’s three-row crossovers (the Chevrolet Traverse, GMC Acadia and Buick Enclave), the SRX is 400 pounds lighter with 20 more horsepower to work with. Strangely enough, the SRX’s engine lost 5 pounds-feet of torque in the process. Having driven the three-row crossovers in the past, I found this engine to work a bit better in the SRX. Yet, this crossover could use some better sound deadening as the engine made its presence known under full throttle. The V6 is connected to a six-speed automatic with a fantastic all-wheel drive system. Shifts were smooth for the most part.

Incidentally, the V6 can run on both regular petrol and E85 ethanol. If you’re concerned about the rising cost of fuel this year, filling the tank of the SRX with E85 would be a good option for you.

When driving the SRX, you do feel the size of this crossover – more the weight, width and height than the length. It shows in the handling as it ranges from smooth to a bit light on the curves. There is some slight roll, but not pronounced. If you do put the SRX in the bends, the best approach is to simply take it easy. The 20-inch Michelin Latitude tires provide nice grip though.

The SRX is a smooth riding crossover overall. However, road imperfections can be felt, but not enough to cause major alarm inside the SRX. Steering action is reasonable with a decent turning radius, but there are occasions when there is a numb feeling from the wheel itself. Braking ranged from mushy with long stops to surer action even at moderate to short stops.

The SRX did yield a better result in one area: Fuel consumption. Any time I would touch GM’s 3.6litre V6, I ended up in the 17-18 MPG range. Granted, these are from vehicles that are 400 pounds heavier with 20 less horsepower. In the SRX, I achieved a fuel consumption average of 19.8 MPG. According to the sticker – this is where the SRX is supposed to be.

At just over $51,000, this fully loaded Cadillac is a decent buy. You can get an SRX with less stuff in it. The luxury crossover starts at over $35,000, but if you get greedy with the trim levels and options, you will head towards the top of the range – such as this Premium grade tester. 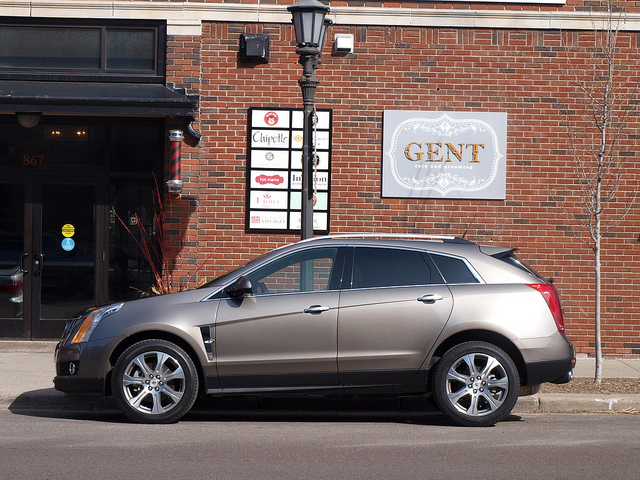 Does the SRX fulfill the brand’s promise of being the “Standard of the World?” If the measuring stick is the 556 horsepower CTS-V, achieving that tag line rests on the upcoming ATS and XTS, based on the mission and upcoming technology both will employ. The SRX is simply a good two-row luxury crossover that attains the best the Cadillac brand offers today.

The SRX is not exactly the “Standard of the World.” It is pretty close to being that.