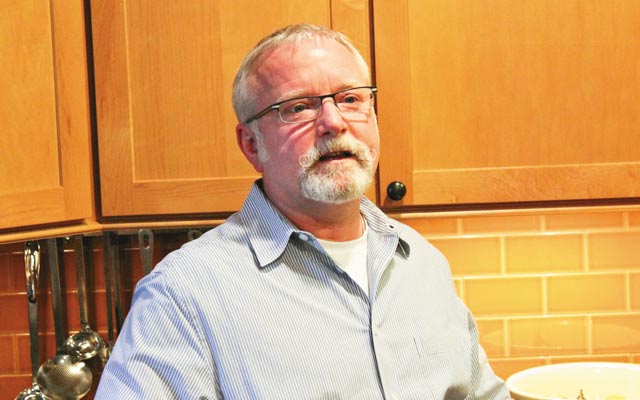 On a crisp winter afternoon, I was invited inside the warm Longfellow neighborhood home of Bret Bannon and his partner Jon Templeton. Whisked into a stunning kitchen I think I shouted an obscenity and hugged the marble island. Ever the gracious host, Bannon served black olive-studded shortbread and poured glasses of a homemade aperitif made from green walnuts and red wine. The plates that the cookies were served on had come from France, once residing in the former home of Julia Child (although the plates weren’t actually hers). Close enough for a food fan like me. We discussed Southern hospitality, his passion for feeding friends, and how it’s inextricably woven into his Catholic faith.

Where did you grow up?
In northern Florida, just south of Jacksonville.

Do you remember the first thing you learned to cook?
Two things. I remember making my mom breakfast for Mother’s Day. I don’t remember the food, but I remember the coffee in this China cup looked so pale, so I added more instant coffee to it. Then I remember in the Boy Scouts, I was an Eagle Scout, so a lot of foods over the fire. I was one of six kids – a big Catholic family, there was a lot of Chef Boyardee.

How did you end up in Minnesota?
I went to graduate school at St. John’s.

What did you study there?
Church music. I came up here sight unseen.

How did you get into cooking?
Well, I was working for the Catholic Church. One day I was walking past Cooks of Crocus Hill in Saint Paul and saw they had a sign advertising for teaching assistants. It was a voluntary position then. They paid $20 gift certificates for every class.

I assisted Zoe Francois, Rocco DiSpirito, Joanne Weir, Marcus Samuelsson, and Andrew Zimmern and learned on the job. This was when Andrew was the chef at Cafe Un Deux Trois. I asked him if I could come in and stage. I got to work with Zoe when she was the pastry chef at the Local. Then I went out to Park Avenue Cafe in New York City. It was really there, in New York, that I realized that I didn’t want to be a chef, that I would rather teach.

I saw on your website that you guide tours through France and stay at Julia Child’s home. When is the next trip?
We’re hoping to do a truffle hunt in February. The home is where Julia and Paul Child lived while she was writing Mastering the Art of French Cooking II. Kathy, who owns the home, has said this will be the last year that we’ll be doing this. Next year would be Julia’s 100th birthday. 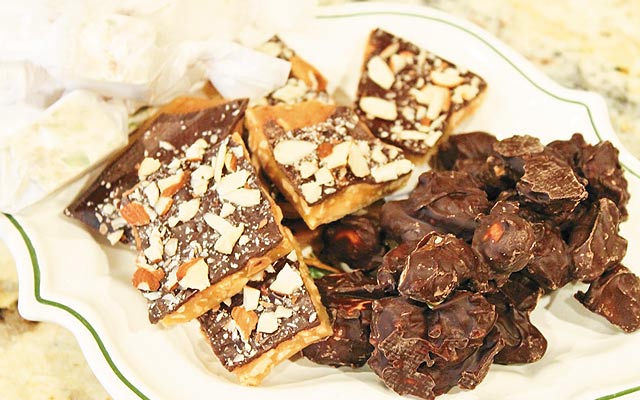 What inspires you most about teaching?
I love having people have that A-ha moment, where they drop the barrier around this mystery of cooking.

It’s like when I was with the Church and teaching people how to pray in public. It’s not something that comes naturally. 1,000 people doing the same thing at the same time. It’s the same thing as having people around my table. It’s a sacred moment. Dinner at the table, the shared meal is the foretaste of the heavenly banquet. Which brings us back to the Church, but that’s what sharing a meal is. It doesn’t matter if it’s paper towel napkins and take-out Chinese, it’s not what the meal is, it’s about the sharing. That’s why I always begin with an aperitif, it’s very traditional in France to serve homemade spirits and a little something to eat, just enough to whet the appetite. It’s a symbol of sharing, this is mine, for you. Which goes back to liturgy – plus, Southern hospitality. We would always offer someone a cup of coffee or sweet tea.

It’s obvious that much of your life and philosophy with living is dedicated to your Catholic Faith. It must be difficult to face the fact that the Church refuses to recognize same-sex unions or allow openly gay members to worship.
I thought about giving it all up – the church. But I was baptized into this religion. I have a right to practice my religion. My God loves me for who I am. I struggled – for years I struggled – I was 28 when I came out. It’s just very sad. I love teaching, love liturgy. More and more…it’s more hateful. That’s why sharing a meal around a table, it’s an extension of my faith. It’s always that foretaste to the last meal.

I have a friend of mine that works with Alain Ducasse at his restaurant in the South of France, in a former monastery. I’ve always said that if I knew I had two days before dying, I would want to fly out there and have my final meal there.

It’s not the presentation, it’s the wonder, the glory, the conversation and the laughter that I love. That’s what heaven is. That’s what the Father is all about. Well, it better be – if I show up and that’s not heaven, I’m going to be pissed.

Where can we find you?
I’m teaching at Cooks on Crocus Hill, Chef’s Abode in Mendota Heights, plus I do private classes, if people would like to hire me to come into their homes.

For more information on Bret’s classes or to travel with him to Julia Child’s home in France to hunt for truffles, find him on the web at www.bretstable.com