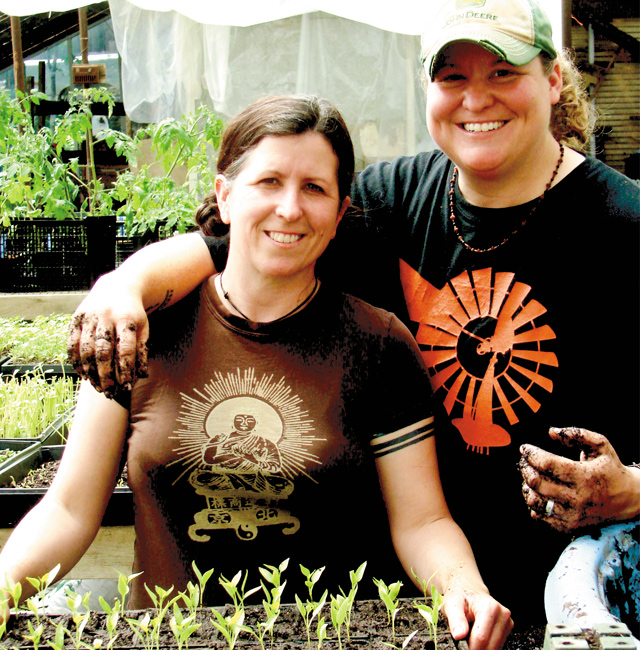 Rain, tomatoes, ticks, and weeds: these are our date night conversation topics lately.

While they might not sound romantic to some, being able to chat about those farm details is actually the realization of a dream for both me and my partner, Karla Pankow, and we’ll gladly pull weeds all day and then talk about it over sushi at Bagu later.

About a year ago, we started our own farm, jokingly named after the attribute we felt we had in common. Bossy Acres has become an all-consuming, joyful, challenging, exhausting, and uplifting adventure that feels as if it’s gaining momentum daily.

In our wee South Minneapolis bungalow, we have seeders and buckets wedged next to the couch, seed potatoes stretched across the dining room table, books on bees and soil and food politics teetering in stacks wherever there’s room. Our hands are permanently crusted with dirt as if we’d gotten odd, hairline tattoos across our fingers.

As I write this, there are 15 flats of lettuces outside in our blazingly yellow van (nicknamed the “Bossy Banana”) and we’re hoping that some volunteers make the trek to our rented acres in Dayton to help us put the greens in the ground. In other words: we’ve created a pretty kickass life, and we’re excited to see what comes next. Even if it involves ticks. 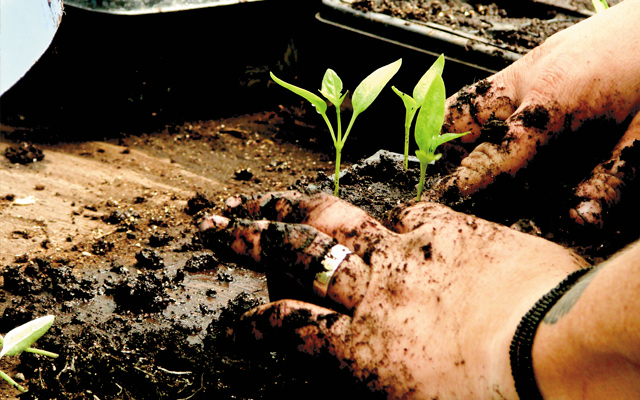 Playing in the Mud

Our path together began, improbably enough, in a tiny village in Zambia, Africa. We’d both signed up for a Habitat for Humanity trip that turned out to be an all-women crew building a cinderblock house for a family there.

For two weeks, we luxuriated in the beauty of a sun-scorched landscape without electricity, running water, or bathrooms. Both Karla and I loved the simplicity and sustainability of life in a place where we had to bring our own garbage bags because the residents never made trash. Every night, the village’s children came and danced with us, while we drank warm beer from chipped tea cups and admired the thick blanket of stars.

From the way that we could fall in love during a time when we each used about two cups of water to shower every day, I suppose we should have known we’d make good partners. After all, not everyone is up for flirting when they’re mixing cement by hand, or trying to catch a chicken for dinner (seriously), but we both thrived in that environment. We snuck behind our group’s sleeping hut for a single, clandestine kiss like kids trying to ditch a chaperone.

From then on, we became inseparable, which was tricky since we lived 600 miles apart. I’d drive to Michigan whenever I could, grateful for my freedom as a freelance journalist, and Karla would fly here on random weekends when she could escape the shackles of her job as a pharmaceutical rep. As anyone in a long distance relationship knows, the situation can be dreary. There are too many meaningful, woeful goodbyes and they always seem to outnumber the hellos. When you’re together, there’s a distant clock ticking somewhere, and you feel the slight pressure of it: three more days together…now two…now none until next time. Another goodbye.

Then, a get-out-of-long-distance-free card arrived: Karla was laid off from her pharma job, right about the time that she’d been doing a weekend internship at an organic farm. Although I’m more of a gradual change kind of girl, Karla has always been the jump-right-in kind that I admire, and she saw the layoff as a chance to change not just her job, but her entire life. She packed up a U-Haul and her two dogs and moved to Minnesota, determined that we could now live out our “someday” dream of having a farm.

Before meeting Karla, I had trouble keeping a houseplant alive. The last vegetable I’d grown myself had been in a paper cup for a 3rd grade science project. I think it was a carrot, and it didn’t turn out well. But I was eager to take on this new adventure, even if it meant I’d have nearly everything to learn. So, I took a deep breath, cleared out plenty of drawer space, bought some books on farm management, and we got Bossy. 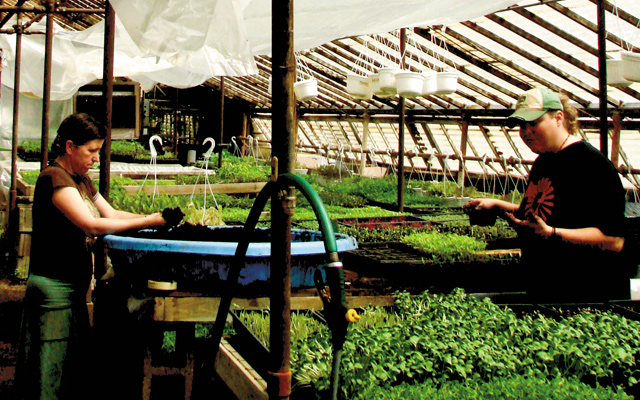 When thinking about our farm’s start, Karla and I had the bucolic visions that any beginning farmers probably envision: our own little acreage with chickens and goats, organic vegetables growing lush and perfectly (without weeds or pests, of course), and a root cellar filled with salsas and sauces we’d canned ourselves.

Well, we haven’t completely given up on that idyllic possibility, but we’ve got miles to go before putting our names on that rural mailbox.

With land prices averaging about $7,000 per acre, we decided to keep my house and rent land instead. Fortunately, we found a farmer about 30 miles away who had land that hasn’t been sprayed with pesticides, and shared our views about the importance of organic practices.

Although we couldn’t have the physical farm that we wanted, we knew that Bossy Acres was about more than a place, and even about more than the vegetables we’d grow. We wanted a farm that was involved with the community, and helped to create a more nourishing food system for everyone. The community supported agriculture (CSA) model was one we’d both admired, and I was the drop-site coordinator for a CSA farm for five years before the Bossy kickstart, so I had some (admittedly limited) exposure to the nuances of the system.

With our goals in place, the seeds got ordered, and Karla built a website (www.bossyacres.com), started a Facebook page, and became a powerhouse on Twitter. Through social media marketing, we began creating buzz about the farm and selling CSA shares, even though at that point we hadn’t grown a single vegetable. But that changed fast: as a winter project, Karla started growing pea shoots and sunflower shoots, and we set up a table at a few indoor winter farmers markets.

The Bossy was at full simmer, but it wasn’t until we began starting our main season seeds at our greenhouse space in St. Paul that I felt that true sense of urgency that comes with farming. It’s like a beautiful, sonorous bell that lets you know you’re already late. 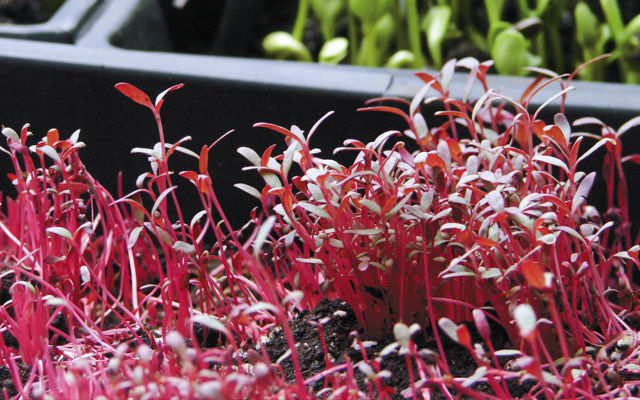 As we get ready for our first full season, coming up on a year in business, we already feel that our vision of a community-supported farm is being realized. Our CSA is sold out, and we look forward to a busy season as vendors at the Fulton Farmers Market. Volunteers and CSA members are pinning down dates to come help us plant and harvest (but we can always use more help, so look up volunteer details on our website!).

The farm’s timing seems fortuitous as well—sustainable agriculture, and particularly urban farming, are taking off here in a way that seems important. Systems are falling into place for supporting local food and the “know your farmer, know your food” movement is like a rising tide, lifting us all toward a better relationship with what’s on our plates.

In many ways, Bossy Acres is also a natural extension of that time in Zambia, when we felt so much closer to the ground. Granted, that partially means we were dirty all the time, but it also means we could feel the power of a community coming together, and the lure of a way of life where there was no garbage, literally or figuratively.

Karla and I see Bossy Acres as a big ol’ fabulous adventure together, and it’s one that we can share with so many other people. And what’s more boss than that?