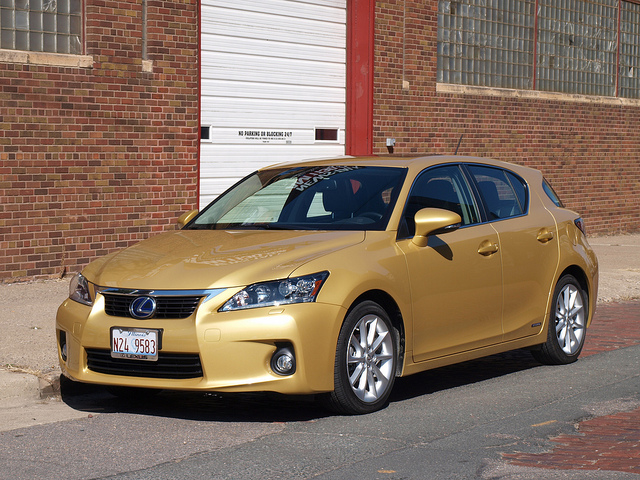 For the past ten years, I’ve struggled with the subject of hybrid automobiles.

There is no question that the combination of petrol and electric motors continues to be a fantastic idea to simply cut down emissions and optimize fuel economy. However, I questioned whether the general public was ready to pay a premium over regular automobiles for the sake of being “green.”

Since then, I tried very hard to embrace this alternative method in vehicle propulsion. After a series of turns in various hybrids, namely all third generations of the Prius, the Honda Insight and the Ford Fusion Hybrid, my internal conflict worsened. I ultimately asked myself if there was a hybrid automobile out there that drove the way I liked. Something that was actually engaging, but spewed almost no carbon in the air and sipped fuel like it was a fine wine.

Toyota’s luxury brand has been playing the hybrid game for quite some time. The  Lexus Hybrid Drive had been tacked onto some of the better petrol engines offered to its consumers. The RX crossover, the GS sports sedan and the LS flagship benefitted from the Lexus Hybrid Drive as an additional offering these models. Then, Lexus decided it was time to make an exclusive hybrid vehicle for its customers: The HS. Some consumers balked at the HS for being an overpriced, overstuffed Prius – attracting only a couple of hundred customers each month according to the latest sales figures.

Enter the CT. The smallest car ever made for Lexus. 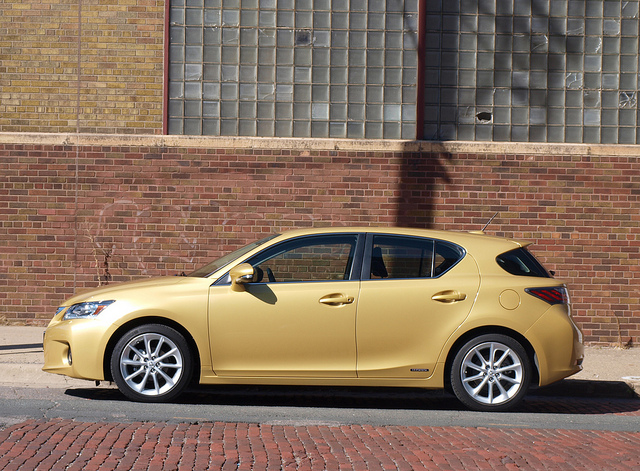 Originally designed for the European market as a premium urban hatchback, the CT was created to combine proper road manners with the driveline from the third generation Prius. The result was a Lexus for upscale urbanistas with a sustainable bent. It also gave us enthusiasts a sporty hatchback with honest green cred.

I wanted to find out whether the CT achieved this delicate balance between sustainability and enthusiast motoring. Furthermore, I wanted to know whether this CT would make me love the hybrid once and for all.

From looking at the CT, one can decipher some key elements of Lexus’ future design language inside and out along with influences from the brand’s $375,000 supercar – the LFA. These Lexus design elements were melded into this squat, sporty hatchback, which may seem like a cross between a Toyota Matrix, a MINI Clubman and an IS-F. Overall, it was intriguing and somewhat polarizing. Frankly, I found the CT quite fun to look at. 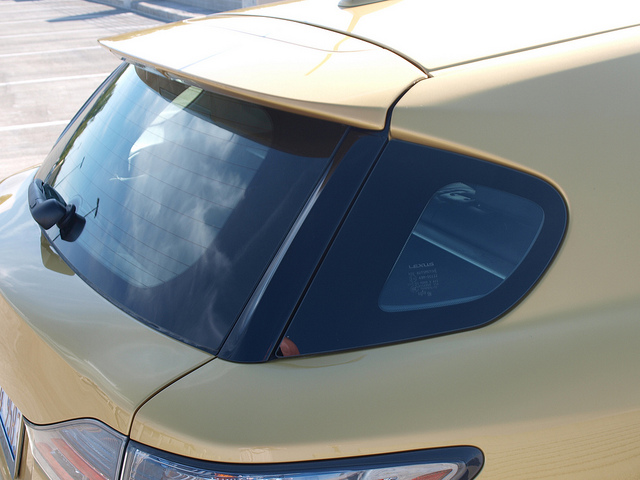 Perhaps the most polarizing part of the CT was the color. The Daybreak Yellow Mica on this Premium example elicited split opinions from everyone that had witnessed it. They either loved the lime-ish, yellow-ish, gold-ish finish or hated it. It is a youthful color that may fit the CT’s potential clientele, but most enthusiasts would rather abhor it. It also brought up the debate over the return to rich and deep pastel colors – raspberries, limes and the sort – to vehicles aimed at younger buyers.

Step inside the cabin, and you are treated to a mix of luxury, sport and technology. There’s simply a lot going on in front of the driver that one would appreciate the soft, supportive leather seats after figuring out all of the functions of the CT. These are perhaps one of the best seats I’ve experienced as a driver in a long time. Never had a seat ever loved me back – that speaks volumes considering what I’ve driven over the same course of time. 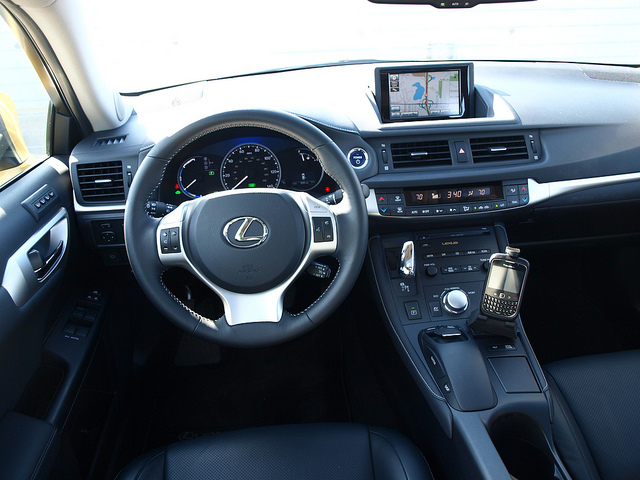 Room is fine up front, but rear seat room can be a challenge for tall and thick passengers where legroom is the biggest complaint above anything else. The smallish rear doors do not help matters at all.

Cargo space is achieved through an expandable and useful space. The rear seats fold absolutely flat which will help with larger items, given they are not taller than the headliner. Even with the rear seats up, there’s plenty of space for a week’s road trip for two people. 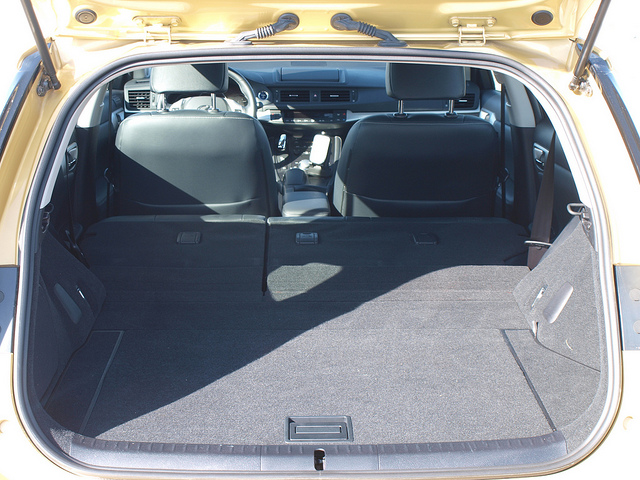 The CT has plenty of tricks up its sleeve for the driver. In one of the packages for the Premium model, the navigation screen flips up from the top of fascia. It is just a part of an interactive screen that switches to a reversing camera, menus for audio, Bluetooth and other Lexus Enform functions. You also get XM NavTraffic and NavWeather when you get into the Premium model.

Controlling the screen comes from a computer mouse-like device permanently installed where gear selector is normally located. The Remote Touch allows you to switch between screens just like your desktop computer. There are also buttons to click between the navigation screen and the main menu.

If you are also familiar with the Prius, then you will recognize the toggle-like gear selector. The only difference is the nice, shiny chrome handle that makes switching to reverse or drive easier to do than in the larger Toyota. Park is engaged with a button. You also start the car with another button. You get used to these buttons because they’re placed in a sporty matter that reminds one of another small premium machine from another continent.

The one feature I found handy was the throwback phone holder just to the side of the Remote Touch controller. Back in the 1980s, you had your cellular phone on a cradle tacked to your center console. Today’s smart phones are indeed an extension of what we do, so they created a phone holder that swivels as well as being easily connectible to the USB and auxiliary ports nearby. 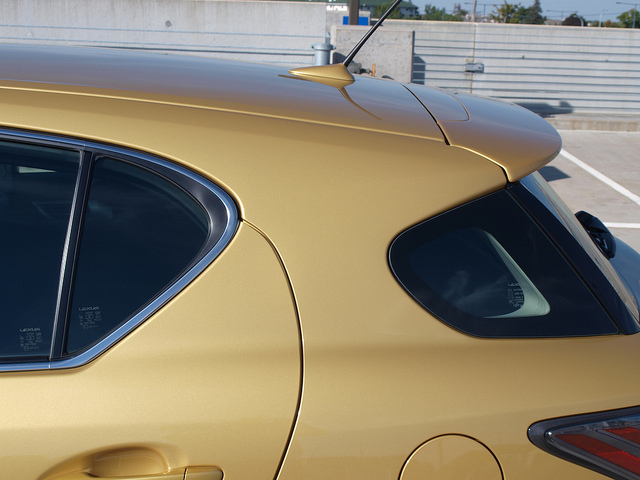 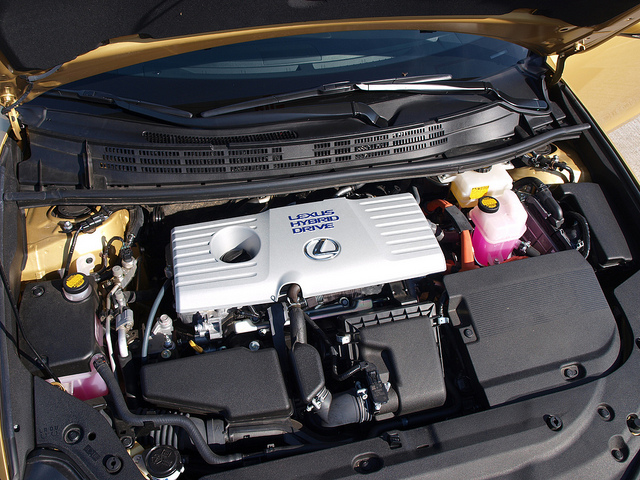 If you just want to drive in the city – and at slow speeds – there’s the EV button near the Drive Mode Select knob. It basically runs the electric motor only up to around school zone speed limits. EV mode is great in the city where you don’t need to race through the neighborhood for a quart of milk from the corner store.

The result of using these modes were what you’d expect from a hybrid. Optimal fuel economy is achieved in Eco mode, while you lose that precious economy in Sport. Either way, I found the CT to be actually fun for a hybrid.

Why is this hybrid fun? Because it had the one thing I want in one: True driving dynamics. It’s not boring like the garden-variety green machines out in the marketplace.  This kitten had claws.

The CT’s claws are shod with a set of Michelins that balanced efficiency with grip. They’re tacked onto a nice set of 17-inch alloy rims. The combination helped maintain a solid, but firm ride in the CT, despite the oft resistance on not so great road surfaces.

Hybrids need not be compromised when it comes to cornering and handling. For the most part, they are. The CT changes that paradigm for good. Being a small hatchback with a low center of gravity, the CT managed corners very competently. There was no resistance from the tires or the car itself when pushed through a cloverleaf or a winding road. The steering helps tremendously. For an electronic system, the steering response was actually was sharp. It had a tight turning radius that will get you out of trouble better than most hybrids in the market.

As for stopping power, I’m afraid this is not a strong point. In most Lexus models, you have solid and strong brake response. You’d expect it to be true on sporty hatchbacks. Not so in the CT. It does stop OK, but I would have preferred a sharper brake response even with the regenerative system used to recharge the battery. To sell a sports hatch, even with green cred, the foot has to be assured of a solid stop every time – both in normal and panic situations.

Where the CT shines above all is attaining the ultimate result for a hybrid – fuel economy. I was extremely impressed that this lime-ish, yellow-ish, gold-ish kitten with claws got an average of 43.9MPG. That’s very impressive – and much better than I expected! This is not only a V&R (and its former nomenclature) record – it’s a personal record.

The drawback on hybrids had been the premium charged for admission. The CT starts under $30,000. The Premium model is a few hundred dollars more. The fully loaded example tested here scaled up to just over $38,200. That’s a huge chunk of change for a compact hybrid hatchback.

Despite the sticker price, the CT turned heads and provoked curious glances. However, the question remains whether this will be the hybrid that will change people’s minds? Compared to the more popular green vehicles in the marketplace, the CT’s formula of creating a premium sporty hatch with a hybrid driveline would only attract a niche clientele.

The Lexus CT 200h is the proverbial Catch-22 for the enthusiast with a sustainable lifestyle. However, I would have no qualms driving a hybrid with true driving dynamics. This CT was worth every mile of petrol sipped through its kitten-like veins.