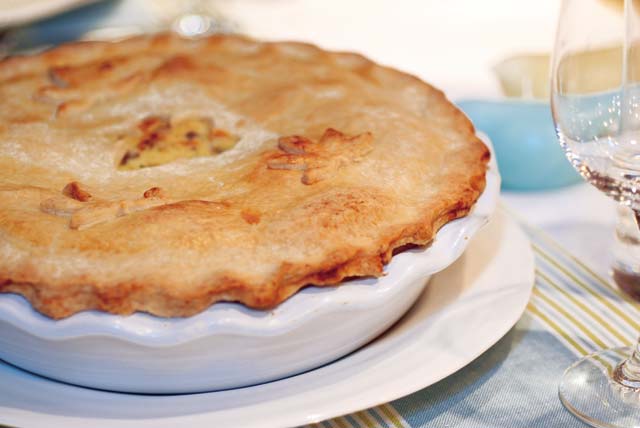 The title refers to a song by Irving Berlin appearing in the musical comedy Face the Music, which opened in 1932 on Broadway.  The song was sung by a group of once-wealthy citizens who were looking ahead to better times.  Sounds familiar?  Well I was recently invited to compete in a food challenge demonstrating that shoppers can still get a lot of bang for their buck.  Thanks to pie, I believe it can be done.

Twin Cities Live airs weekday afternoons in the Twin Cities and I’ve been a regular on the show almost from the very beginning.  A couple years ago the production team created a food challenge for the show where the winner would receive a coveted “Golden Whisk”–a kitchen whisk spray painted gold and glued to a piece of wood.  It’s since been updated with a new higher quality whisk and permanently fastened with gold glitter added.  I won the Golden Whisk two challenges in a row for my Crock Pot Apple Pie and Mom’s Cheesy Potatoes.

Cub Foods, one of the sponsors for Twin Cities Live recently held a contest where the winner would receive free groceries for one year.  All they had to do is enter their recipes creating as many meals or as much food for as many people as possible for $20.00 or under.  Twin Cities Live decided to offer this same challenge to five of their favorite chefs awarding the Golden Whisk along with a $100.00 gift card to Cub Foods.  We were each given a $20.00 gift card and on with the challenge.

It took me days to figure out my angle.  At first I wanted to try to make three meals a day for an entire week but I ran over budget on day two.  Next was a recipe I brought back from Italy for Venetian Lasagna that is out of this world.  I thought maybe I could make it for 40 or 50 people however a regular 13-inch by 9-inch baking dish costs about $25.00 dollars for ingredients like Italian pancetta, a good quality red wine, and ground meat and Italian sausage.

One day I was taking a break from my work and tuned into Twin Cities Live.  Hosts John Hanson and Elizabeth Ries announced that “John Michael Lerma–The Pie Guy” would be joining the challenge. I’ve been called that forever and love it; I’m the “Pie Guy” even if I’m preparing pork tenderloin.  But, a light bulb went off in my head and I decided to prepare pies for $20.00 or under.

I created a list and finally chose my Vidalia Onion Pie as the vegetable, Leftover Poultry Pie as the entrée, and Grandma’s Apple Pie for dessert.  Each pie would feed up to 10 people and/or provide delectable leftovers.

The shopping proved to be the most difficult task of the challenge.  I shared this with John and Elizabeth on live television and added that this challenge was harder than a Food Network Challenge, a couple years previous, during which I won a Food Network medal.

I prepared my own pie crusts which was allowed as flour, salt, butter, are regular staples most kitchen have stocked.  My groceries included a 3 pound bag of apples, onions, frozen vegetables, and my one “luxury” item–a rotisserie chicken for the Leftover Poultry Pie.

On my way to the cashier, I stopped and picked up a packet of Pink Lemonade Kool-Aid.  I thought about my presentation on television with pie wedges plated and served with glasses of pink lemonade.  I had about .49 cents left on my budget and Kool-Aid was only .25 cents.

At the check-out counter my grand total came to $20.03.  I was over by .03 cents!  It was brought to my attention that since the chicken had been prepared on site—rotisserized–it was a taxed item.  I was charged .46 cents tax.  I handed the packet of Kool-Aid to the cashier and asked to have it voided while everyone in line behind me shifted weight to the other foot.

Later, as I was shredding up the chicken meat for my pie filling, I remembered playing Monopoly and questioning what a Luxury Tax was, that little box between Boardwalk and Park Place.  Now I knew a .46 cents tax on a damn rotisserie chicken that was going into a pie.  Talk about depressing, that is…until I lost the challenge and tied for last place.