The Secular Side of Marriage Equality 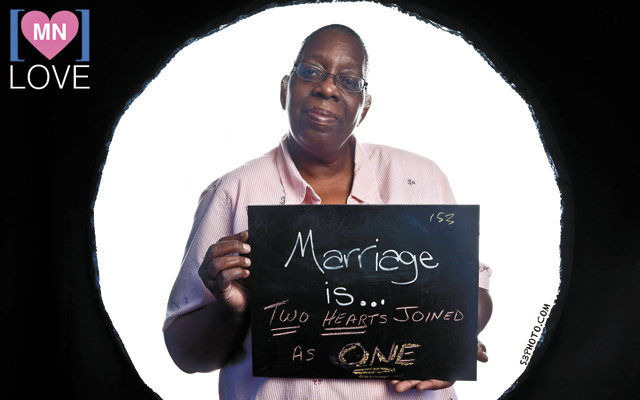 Minnesota Atheists has been fighting for decades to keep religion out of government, according to August Berkshire, the group’s president.

When three same-sex couples were denied marriage licenses in Hennepin County for their sexual orientation, filed a lawsuit in March 2010 to strike down the Minnesota Defense of Marriage Act and then lost, the atheists took notice.

Once the couples appealed the decision of the Hennepin County District Court, Minnesota Atheists were able to jump in and help them out, said Berkshire. The group filed an amicus brief to bring their secular perspective to the discussion of marriage.

“We are going to get our arguments in there now to help them and do what we can to help, because this is an issue we’ve been supporting since the roots of our founding in 1984,” said Berkshire, who was one of the founders of the Twin Cities chapter of American Atheists, which became Minnesota Atheists in 1991.

DOMA, which does not allow same-sex couples to get married, also prevents the out-of-state marriages of the couples in the case from being recognized in Minnesota, according to Berkshire.

The couples, who collectively form Marry Me Minnesota, a non-profit organization established in 2008 to prepare for the case, are seeking to abolish the state’s “statutory ban on same-sex marriage,” as the group’s website states.

The amicus brief filed by Minnesota Atheists supports the couples in their effort to get rid of the law and argues the unconstitutionality of DOMA, noting the law’s theological basis.

Berkshire said the religious roots of the law are grounded in “conservative Christian” views and leave those who have differing beliefs out in the cold.

“[DOMA is] a religious law that’s not just a difference of opinion,” Berkshire said. “It’s a religious law that’s harming people.”The amicus brief gives several sectarian arguments why same-sex marriage is considered unacceptable by some religious institutions, but says there is no secular reason to bar same-sex couples from opportunities given to heterosexual couples.

The act was upheld by the trial court, citing a precedent set in a 1971 Minnesota Supreme Court case, Baker v. Nelson, which dismissed a constitutional challenge to the predecessor of DOMA and ruled that citizens do not have an innate right to get married, according to Berkshire.

But the issue of religious freedom was not considered in the Baker case, Berkshire said, so was insufficient reasoning to uphold DOMA, which, according to the brief, has significant “religious underpinnings.”

Marshall Tanick, the lawyer who contributed to the brief, said one of the issues the appellate court should consider, which the trial court did not, is that the Baker case did not address freedom of religion.

Tanick said the purpose of a brief of amicus curiae is to point out arguments the court has not considered yet.

Nikitas said the briefs are a mechanism for people or groups to offer another angle for the judges to consider because the outcome of the case matters to them. This way they feel “they have done something about it.“
Nikitas underscored some of the points made by Minnesota Atheists in the brief, including the unconstitutionality of DOMA.

“[The plaintiffs] want to enjoy marriage like any John and Jane or Harry and Mary in the state and to prevent same sex couples from the benefits of marriage has no justification,” stated Nikitas.

Nikitas added: “The government can’t play favorites. When government starts playing favorites on the matter of religious beliefs, society falls apart, civil strife ensues and a lot of misery as a result.”

Plaintiffs Jessica Dykhuis and Lindzi Campbell, who were married August 2011 in Iowa, said they are thankful for the support of Minnesota Atheists.

“I think its great and an amicus brief is a huge deal for [Minnesota Atheists],” said Dykhuis, as briefs mean legal fees and take time to put together.

Campbell, a firefighter, and Dykhuis, a Doula, are raising a 10-year-old, who is also one of the plaintiffs in the case, and a 2-year-old in Duluth. They said it’s a “pretty progressive” city, but they still are not able to enjoy the benefits that other heterosexual married couples do.

Campbell explained she is glad the case stoked debate and allowed her and her family to fight the marriage equality battle on two fronts, even if they are not successful in the suit. The couple has been part of the fight against the state constitutional amendment to define marriage between one man and one woman, which will appear on the ballot in November 2012.

“If nothing else, at least we have been able to create a conversation,” Campbell said.

Doug Benson, the executive director of Marry Me Minnesota and a plaintiff in the case, said it is difficult to predict the impact the Minnesota Atheists’ brief will have on the outcome of the case.

“We’re very happy and grateful to them for…filing their brief,” Benson said. “We welcome and appreciate the perspective of the Minnesota Atheists.”

Benson said he and his partner Duane Gajewski, who is also represented in the case, “have stood the test of time.”

“We will always be married in our eyes,” Benson said. “It would be a big thing to have the government finally recognize our relationship and afford us the same rights. It would be a good feeling.”

Benson said fighting for marriage equality has been a huge part of his and Gajewski’s relationship. He said it has been a long road, but even if the appellate court does not get rid of DOMA, they will keep going.

“When you’re dealing with human beings, anything’s possible,” Benson said. “If we’re successful, wonderful. If we’re not, we’ll go back and do it again…until we get the equality we deserve and demand.”

Benson and Gajewski met in 1990, then 36 and 27, respectively, while working on Paul Wellstone’s first run for office, Benson said. They were married in Vermont in 2000 (then called civil unions, now recognized as marriages by the

state), Ontario in 2003, and California in 2004, according to Benson. They currently live in Robbinsdale, Minnesota, with their basset hound, Simon.

Thomas Trisko and John Rittman of Minneapolis are the third couple represented in the case. They met in 1973, were registered as domestic partners in Minneapolis in 1991 and were married in Manitoba in 2005, according to the complaint.

The plaintiffs are now suing the State of Minnesota and Jill Alverson in her official capacity as Hennepin County Local Registrar, according to the appeal brief. Oral arguments will be heard in the Minnesota Court of Appeals Oct. 26.