Ten Years of BiCities! on TV 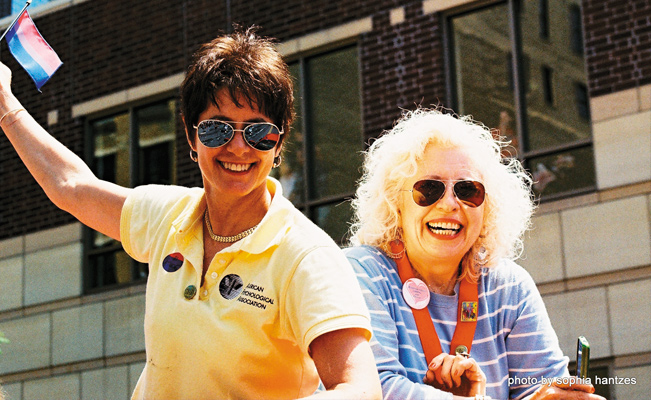 BiCities!, a television program which calls itself “a show by, for and about the bisexual community and our friends and allies,” will celebrate its tenth anniversary in September 2012. Founded in 2002 by Dr. Marge Charmoli and Dr. Anita Kozan, BiCities! offers programming focused on educating the bi community and demystifying myths surrounding bi people.

Run by volunteers and produced for public access cable and the internet, BiCities! features interviews with national and local figures in the bisexual community. Co-producer Marge Charmoli says that the goal of BiCities! is to “get the bi community together” and to “create visibility for the bi community and use it as educational outreach.” Charmoli also says that it’s important to have programming like this because the bi community is so invisible–most events or programs are specifically straight or gay.

The show offers hope, information, and reminds bi people that they are not alone in this world. Charmoli says the best thing about producing this show is that they are “touching other people in a meaningful way–we’ve changed people’s lives.”

Charmoli recalls several moments where listeners reached out to tell their stories and thank BiCities! for the work it has done. Most notable was a woman from India who showed up at the 2010 BECAUSE Conference after hearing a BiCities! broadcast online. The woman looked up information about bisexuality online and caught the particular BiCities! episode regarding the conference. Three days later, she was at the conference and embraced into the bi community, feeling for the first time that she wasn’t alone.

Although Charmoli says “it’s hard to get bi visibility,” she is honored to know that BiCities! has had such an impact on individuals. For more information including past shows and upcoming broadcasts, visit www.bicities.org.