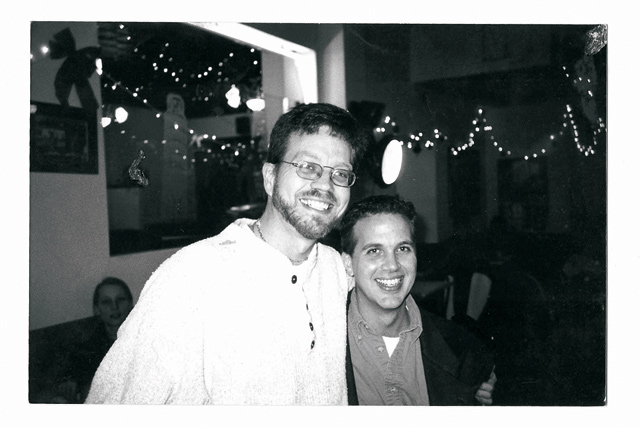 Brett and Randy 15 years ago. Photo courtesy of Brett Stevens

One of the frustrations I’ve felt about the same-sex marriage argument has been the reliance on this as a civil rights/equality issue.  It may be that but it’s so much more.  We same-sex couples are families.  We are in families.  Some of us have children.  We have sisters, brothers, cousins, parents, uncles, aunts, and family friends.  Our relationships with one another exist regardless of state recognition.  This matters.  We are missing an important argument towards winning this fight.  Let me set the scene.

Doug Belden wrote a very interesting article in the February 2, 2013, Pioneer Press entitled, “Gay marriage battle, round 2, coming to Minnesota Capitol.”  In this article he carefully lays out the cases being made by pro-same-sex marriage groups and the anti-same-sex marriage side.  What’s interesting, is neither one is really talking about us.  Instead each side argues as though we weren’t actually, well, there, as people.

“It’s exactly the same set of values that we touched upon that were successful in defeating the amendment,” said state Sen. Scott Dibble, DFL-Minneapolis, who will sponsor the gay-marriage bill in the Senate.  “Marriage is about love and commitment.  People taking responsibility for each other. Freedom belongs to everyone, and the freedom to marry is a part of the freedoms we all enjoy. And we treat everyone in Minnesota with dignity and respect.”

These are high-minded ideals.  This strategy did defeat the Marriage Amendment, but is that enough?  Ordinary Minnesotans voted against making marriage a constitutionally defined device.  People were reluctant to “enshrine it” in our fundamental civil contract.  Relationships are about love and commitment but they are more than that.  It is the way we arrange our lives and our interactions.

Minnesota United for All Families also characterized it in the same way; civil rights.

“Up until Nov. 6, the conversation was essentially: The freedom to marry is already limited, we don’t need to put this in our constitution and make it permanent and forevermore,” said Jake Loesch, spokesman for Minnesotans United. “And now the conversation has sort of moved from no to yes, and really helping people understand how important it is that we include same-sex couples in marriage and allow them the same freedom that everyone else has.”

Loesch makes the same argument as Dibble.  This is about fairness and equality.  We should have our relationships recognized by the state because it is about freedom.  We should be free to marry.  It’s a civil rights issue.  There is nothing wrong with this approach except it isn’t compelling by itself.  We all want to be “fair” and “equal” and have “freedoms.”  But these ideals speak only to the GLBT community and to our staunchest allies.  They don’t speak as powerfully to those who may marginally agree.

Let’s consider the argument on the other side of the issue.  Jason Adkins of the Minnesota Catholic Conference had this to say about this fight: “The movement to redefine marriage is not fundamentally about marriage. It’s about the symbolic move to create GLBT equality, and what I think is essentially normalizing homosexual relationships and putting them on the same plane as heterosexual relationships, to say that they’re fundamentally equal.”

Adkins’ argument essentially ignores the relationships we have as ‘not real.’  He suggests our relationships don’t have the heft and meaning a traditional marriage relationship does.  That is the fundamental weakness in his argument.  If our relationships don’t have substance, he has a point.  But, we know he’s wrong.  They do and he fails to recognize that, which is why he says the following: “Now, from a public policy perspective, though, government has a compelling interest in privileging the relationships between a man and a woman because of the public benefits they serve. If we redefine marriage, we’re essentially eliminating marriage and turning it into a system of love licenses, government-sponsored love licenses. What’s the public purpose of that? There is none.”

The traditional marriage argument is that government’s interest in providing special treatment to a man/woman couple is rooted in the interests of children.  We created stable, state-recognized family units in order to facilitate raising children in a good environment.  If children have two parents who work together and support the nurturing of children, these children have a better chance at becoming responsible, productive members of society.  Let’s not question the premise but consider the fatal flaw in their argument.

There are many same-sex couples with children, both biological and adopted.  Are these children in family units that are less real?  What about the fact we don’t require married couples to procreate to have their relationships recognized?  It goes even deeper than that.  While government may have recognized marriage and offered benefits and obligations, they did so because of voluntary affiliations.  Since arranged marriages have long since become a footnote in the United States history, our traditional relationships are based on these affiliations made by the two people deliberately.  We even made this important characteristic part of our marriage law. 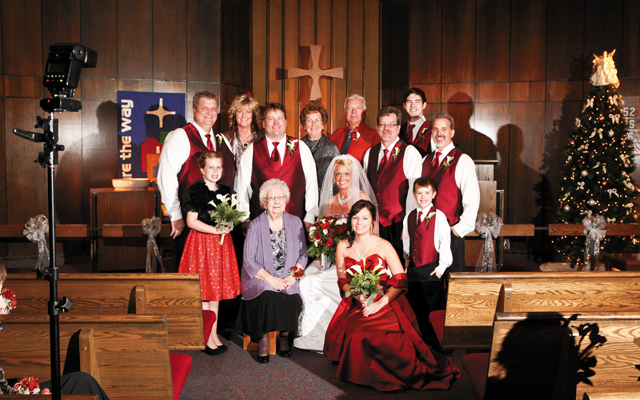 The family at Neil and Rachel’s wedding. Photo by John Silker of Silker Photo

As MN Statues 517.01 states, “Marriage, so far as its validity in law is concerned, is a civil contract between a man and a woman, to which the consent of the parties, capable in law of contracting, is essential.”  As far as relationship recognition is concerned, same-sex couples who want to take the leap have fulfilled the other requirements of the statute.  We are consensual parties who seek a civil contract.  Only our gender stands in the way of state recognition.  The moral agreement already exists.

This important philosophic question must be raised.  Same-sex marriage advocates aren’t arguing our actual relationships as important.  It is our civil right to state recognition, but they aren’t addressing the real need.  The other side argues there is a purpose to marriage laws and they don’t think our relationships cut the mustard.

What we need to do as a community is show our legislators our relationships do exist, recognizing them does matter, and we need to do so now.

There is nothing wrong with arguing civil rights but without a compelling reason for passage it’s too easy to consider it something we can do later.  That is the argument the community and our allies need to make to legislators.  But how can we do so in an honest, compelling, and respectful way?

I looked through my family photo album and found our relationship jumps from the pages.

I try not to get personal with this subject, though it affects me deeply.  Nevertheless, I will make an exception in this case.  In a week, my partner and I will be celebrating 15 years together.  In that time, my nephews and niece have known us as a couple.  The youngest probably cannot recall a time when we were not.  My partner is their uncle.  We are together.  We are part of the family and while it hasn’t always been easy, we are there.  For example, my brother included my partner on his wedding program as his “brother-in-law” which is a misnomer in legal terms but true in terms of the heart.

What can you do?

Pull out that picture album and see if you find the same thing.  We are there, smiling back, proof of years of love and commitment.  I propose we take the photographs of us and our children, if we are so blessed, and send them to our legislators.  Along with those images, write a short caption of what your relationship means to you.  Let them know that legal recognition of our families matters.  All families are different.  Our straight family members and friends can help show how we are part of what makes them special.

For these allies, it could be a picture of a dear cousin and her partner.  It could be your little brother and his significant other.  Perhaps you have children who are in committed relationships as real as any traditional marriage.  Even friends who are like family can show our elected officials we are there and our relationships have substance and meaning.  It’s all there in pictures

Share these images and stories with legislators and their staff members.  Let our lives become real and essential to our legislators.  If we do so, it may motivate them into action.  Otherwise I fear we are slipping into a pitched battle without recognizing the humanity of the issue.  Our relationships do matter and we should put faces to the ideal.

To find your legislators, go to www.gis.leg.mn/OpenLayers/districts/