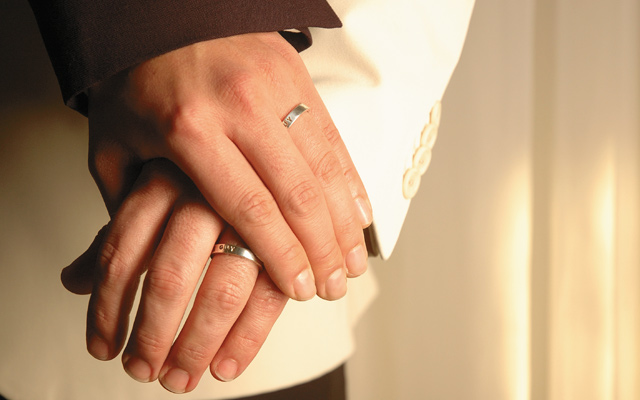 Three Minnesota couples are suing the state, a divisive move that many marriage equality supporters say will do more harm than good in the 2012 ballot battle

Marry Me Minnesota, composed of three Minnesota same-sex couples suing the state to get rid of the Defense of Marriage Act, has not been getting the full support of the Minnesota GLBT community.

Some Minnesota marriage equality advocates said they support the aim of Marry Me Minnesota, but not the means. Some said that the lawsuit, which went to Minnesota Court of Appeals on October 26 for oral argument, is not likely to succeed and, if it fails, would be a major setback in the fight for marriage equality.

Ann Kaner-Roth, executive director of Project 515, said the groups hold the same position three years later: that same-sex couples should be treated equally under Minnesota law, but proceeding with a lawsuit is not the best strategy.

The statement says: “Because progress toward full marriage equality in other states has often been the result of court litigation, it is tempting to consider initiating a court challenge to Minnesota’s current bans on marriage for gay and lesbian couples. However, filing lawsuits in Minnesota is not the best approach at this time and in fact poses a significant risk to achieving marriage equality.”

The groups and the plaintiffs in the case share the same aspirations for marriage in Minnesota, but the ranks in the battle for marriage equality have broken on the method, according to Phil Duran, OutFront Minnesota’s legal director.

Duran said the case could cause unintended consequences by setting another harmful precedent, like the 1971 Baker v. Nelson case that determined only heterosexual couples are able to get married in Minnesota, which already is a major hurdle for the Marry Me Minnesota case to clear. “Here’s the reality: change takes a long time,” Duran said. He said the cards are stacked against the plaintiffs and an unsuccessful attempt in court would mean a push in the wrong direction.

Duran said that the court, overall, is judicially conservative, meaning it is unlikely to spur a dramatic policy change as a result of the case and is more likely to hand it off to the legislature.

“The court may surprise us: the plaintiffs could win,” Duran said. “It seems unlikely.”

The organizations will continue to fight the marriage amendment, Duran said, to stop discrimination based on sexual orientation from being enshrined in the state constitution.

“The key effort that needs to be made is defeating the marriage amendment,” Duran said. “If that gets passed, the outcome of the lawsuit doesn’t really matter. From our standpoint, that’s where we are focusing our efforts.”

Dibble said that the case does not have the “foundational elements” in the Minnesota Constitution that allowed other similar lawsuits, like the California case fighting Proposition 8, to succeed.

“I’m sorry [the lawsuit] is proceeding,” Dibble said. He said if it does not succeed, “not only does that establish precedent, it diminishes legislative appetite [and] adds another indication that perhaps we’re not ready as a state to do this.”

Dale Carpenter, a University of Minnesota professor of civil rights and civil liberties law, said the lawsuit actually fueled proponents of the marriage amendment to put the debate in the hands of the electorate.

“[The lawsuit] was used by opponents of gay marriage for a reason to have an amendment. [In other words], they said if we don’t decide this by vote of the people then the courts are going to force it onto us,” Carpenter said. “They started using it and that was a successful argument.”

“This lawsuit has helped to cause a considerably amount of damage to the cause of gay marriage,” Carpenter said. “It was unintentional. The couples are doing this with the best intentions. It would’ve been far wiser to hold off…it would be beneficial to drop the lawsuit.”

Carpenter said he understands why the plaintiffs were tired of waiting for change, but the lawsuit was not the best strategy from a legal standpoint.

“I really feel for these people,” Carpenter said. “I know that they’re trying to do good, but [the lawsuit] really is harming the cause in a lot of ways.”

Doug Benson, a plaintiff in the case, said it “feels like betrayal” that the community he has been fighting alongside for decades is not supporting the lawsuit.

Benson said he tried the legislative route. He helped push a bill into the house with Representative Phyllis Kahn, DFL-Minneapolis, as the chief author, which failed, and at one point, he said, he went to the capitol to protest every day.

Benson fought in the legislature to no avail. Benson said that too much time had gone by with no progress made towards marriage equality in the state and felt something had to be done.

“Almost a generation has passed and there has been absolutely no progress on gay rights in the state,” Benson said. In fall of 2008, Marry Me Minnesota was incorporated and the lawsuit was filed May 2010.

Benson said he would not wait around for someone else to step up and the lack of support by local non-profit GLBT advocacy groups is no deterrent.

“Our philosophy throughout this is: it is the duty of citizens to come forward and that’s what we are doing,” Benson said. “Why should we wait for some other group of people to do something?”

He added, “We’re not sitting still. The real issue that needs to be dealt with is being dealt with now. We have just got to keep plugging away at it.”

Rep. Phyllis Kahn said she can see both sides of the argument and cannot predict the outcome of the case.

“People have been wrong before how things will go,” Kahn said. She added, “I’m neither encouraging them.  I understand both positions.”