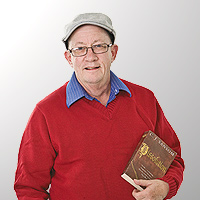 Take my knee. I recently underwent what I consider a Golden Years rite of passage: the total knee replacement. Most of my contemporaries, it seems, have either had, is about to have, or knows someone close who has had a new part installed. Live long enough and your body resembles a classic British MGTD – it’ll run, but spends more quality time in the shop.

My own procedure went swimmingly–I was walking without assistance within a week, completing my rehab at a superb facility in nearby St. Louis Park (at the peak of July’s Death Valley Days).

What caught my attention during that period were the numbers of elderly (some older than I) patients who were also having therapy sessions. Everyone had his or her own path to follow, and I was moved by the dignity and tenacity with which each labored to take a step, to learn how to get about again in bath or kitchen settings, and how diligently spouses participated as well, practicing safety techniques to assist their partners upon their return home.

Significant too, the patience and empathy of the therapy staff, sharing the humor and determination of their clients as they strove to regain what they had lost for whatever reason, the victories of those who left to return home, the courage of those who soldiered on. I could not help but compare these small acts of courage to the strutting, bluff and bravado going in the “Big” scene during those same days as the country was brought to the brink of shutdown so that one side might proclaim itself the sole winner.

When I finally pulled out my Newsweek and took a closer look at Ms. Bachmann, I realized I was just witnessing another cheap shot in the choice of that photo. “Because we could” seems to be the prevailing motto these days, politically, socially, financially.

The world needs a time-out from Big. We need less bluff and bravado and a greater recognition and appreciation of the little steps filled with great courage it takes to heal.