Leather Life: “Of Beards and Men” 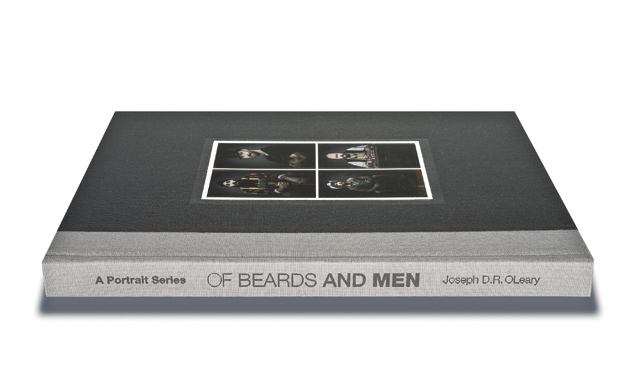 On one level, Of Beards and Men, a brilliant new photo book by photographer and designer Joseph D.R. OLeary, is just what it says it is—photos of 140 men with beards or other facial hair.

Yet the book is also so much more, on so many levels. It’s a photographic essay on contemporary masculinity. It’s 140 individual character studies. It’s a stellar photographic project; a series of rich and luminous portraits by a photographer (himself a bearded gentleman) who possesses a keen eye for color, mood and detail, and a polished sense of design that allows him to present the photographs in a beautiful and elegant setting.

In this book we meet these 140 men and get to know them. We also meet and get to know OLeary, because the book is OLeary’s creation and he did almost everything necessary to create it. He rounded up the models, spent hours taking photographs, selected the the best ones for the book, designed every aspect of the book, set the type, laid out the pages, dealt with the printers (personally checking the printed pages as they came off the press) and the bookbinders (even folding the dust covers and shrink-wrapping books himself). This is an artisan’s book, an inspired work of art and a concrete realization of OLeary’s vision spread over a 212-page canvas. OLeary has been taking photographs since he was a boy and has run a design firm called Veto Design since 1992, so he is well qualified to produce such a beautiful book.

The world—literally—has noticed OLeary’s efforts. Both OLeary and the book have gotten press coverage all over the world and exhibitions in New Hampshire, Virginia, Florida, Colorado, and The Netherlands.

OLeary found his bearded subjects in several ways—distributing postcards announcing and publicizing the project, social media and word of mouth. His bearded subjects ventured out to OLeary’s photo studio, which is in a remodeled barn on the farm where he lives with his partner. OLeary’s subjects were instructed to bring a few changes of clothes and objects that they felt expressed them “professionally, physically or spiritually.”

The photo shoots were long. “I was enjoying the conversation so much,” says OLeary. “We had great conversations.” OLeary says he felt he really got to know them as he photographed them: “I felt like, in a way, these guys have all become my brothers.” Because the photos are supplemented with capsule biographies, readers feel they get to know these men, too. (In fact, you already might know some of the guys in the book if you spend any time at the Minneapolis Eagle.)