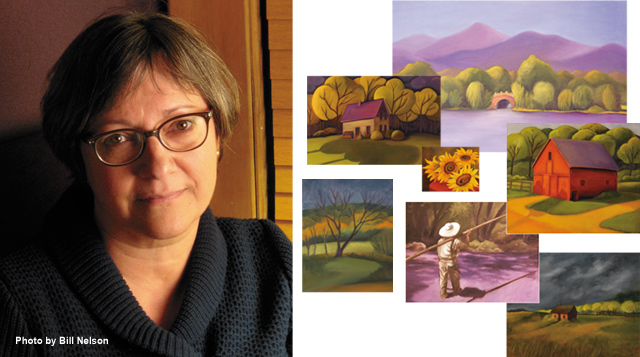 Koi.  Colorful, orange fish that are actually carp–just the more colorful versions of carp.  Colorful carp grace our cover of the 2012 Lavender Yellow Pages Edition, accenting it with a brightness that makes them pop from the cover.  Koi.  Fish that symbolize love and happiness.  Swimming together, colorfully.  Members of a community within a community on the earth, making everything more beautiful.

Jane Weis is the St. Paul artist who created the cover out of pastels. She answered our call for entries for artwork that would symbolize an aspect of the fight against the anti-marriage amendment that we are facing on our ballot in November.

Here is more of what she has to say about marriage equality and art:

I am amazed and confounded by the idea that a certain group of Minnesotans are spending enormous amounts of time, money, and energy to force a popular vote meant to deny the possibility of marriage to our families, friends, and neighbors who happen to be gay.

As an artist, I see the world through color and texture. The variations are part of what make art interesting and diverse. As the world around us is full of color, even the black and white areas of our lives play in tones of silver and gray.

With regard to the issue of the marriage amendment, some things in life are shades of gray, others are clearly black and white. I feel deeply that this is one of  the latter. This campaign against allowing gay marriage is wrong in so many ways, not the least of which is a majority vote that could, potentially, move against a minority; the notion that recognizing same-gender relationships will in any way threaten straight marriages; and equally important, especially for those inclined to religious intolerance of homosexuals, if we’re all made in God’s image, then it follows that those made gay are merely reflecting an image of God that is far more comprehensive than thought by some.

To deny basic human rights and privileges–where public policy is developed through a constitutional amendment rather than on the floor of public, civil debate–is simply arrogant and dangerous. Our government is supposed to protect minorities from the tyranny of the majority, not base elections on it.

As those of us who work in the visual arts know, capturing the play of light through color and texture reflects the world in which we live. Even the printed page, black on white, has its imperfections; falsifying perfection by trying to create the “perfect” palette for marriage is simply wrong. It denies the beauty and complexity of human relationships that should be protected, equally, in a system of democracy.

If you are interested in bidding on the original piece of art on the cover of this issue, “Shanghai Garden Fish Pond #3”, please see www.mnunited.org for more details.