Give the Gift of Books: Keep True Colors Flying 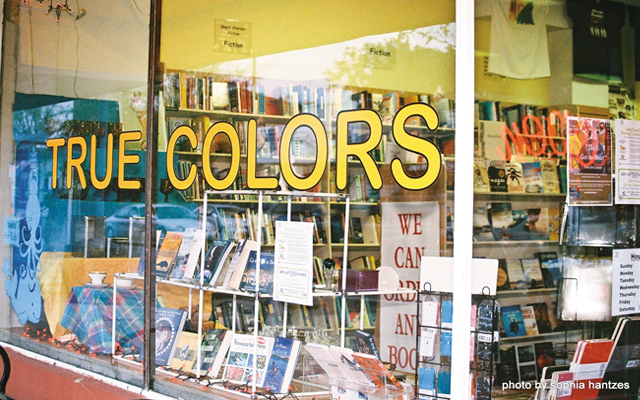 “So – what do I want readers to know about True Colors? That we are OPEN!” said owner Ruta Skujins. “There was so much fuss about Amazon closing, “but relatively little about me buying it and keeping it open. Even after 3 1?2 years, I still talk to people who don’t know we’re open. I sometimes think more women in other parts of the country/world know that True Colors took over Amazon than do people in the Twin Cities.”

Formerly Amazon Bookstore Cooperative, and Amazon Feminist Bookstore before that, True Colors remains the country’s oldest continually operating feminist bookstore. “It began,” Skujins recounted, “on the front porch of a commune in 1970 as an informal way to distribute books, manifestos, periodicals and other writings of the growing women’s movement.”

After several locations, including15 years at Loring Park it moved in 2,000 to the new Chrysalis Center for Women, then a few blocks south to its current location.

Sole owner since 2008, Skujins continues the tradition of “empowering women and girls, of providing products and services that encourage and foster the strength, wisdom, and diversity of women, their families and allies.

“We pack a lot into a small space!” noted Skujins–with over 10,000 titles of new books in stock, and used editions and event space below. She fostered a “completely different atmosphere,” explaining, “I’d talked to, and heard about, many men and trans people who never felt welcome in the store. That’s changed.

“We’re a resource for women coming out,” continued Skujions,” as well as for newcomers to town. We can direct them to organizations and places where they can meet other women. The trans community is welcome and we try to stock most books in print on transgender. Schools and churches come to us to obtain LGBT books for their libraries.”

As an editor at two lesbian publishing houses, judge for the Golden Crown Literary Society, and beta-reader of lesbian fiction, Skujins made many lesbian author friends. “I receive requests from authors around the world to stock theirworks of lesfic. Authors donate books to the store, and have traveled from as far as Boston and Houston to do book launches here.

“We are becoming known for our spirituality section, and publishers and authors of spirituality books–both mainstream and other–want us to carry their books and host readings. We participate in the Mankato Women’s Spirituality Conference, and New Age expos in Hutchinson, Minnetonka and Mankato and other locations. And, finally, our children’s section is absolutely awesome. We invest a lot of time to ensure that our selections reflect diversity of race, ethnicity and culture.”

As important a place as True Colors holds in the Twin Cities GLBT communities, its business has been affected by the current economic downswing. Online sales, once a major part of the store’s revenue, have dropped sharply, although Skujins finds there are “still many women around the country who prefer to order from a feminist/lesbian bookstore.”

It’s fine to ber aware that True Colors is OPEN, but even more important to stop by and buy: “If business doesn’t pick up significantly in the next two months,” Skujins acknowledged, “we’ll be closing when the lease runs out in March. I’m constantly told about how much emotional support there is for the store, but that doesn’t pay the bills.”