From Closet to Community–Quatrefoil Library Celebrates Its 25th Anniversary 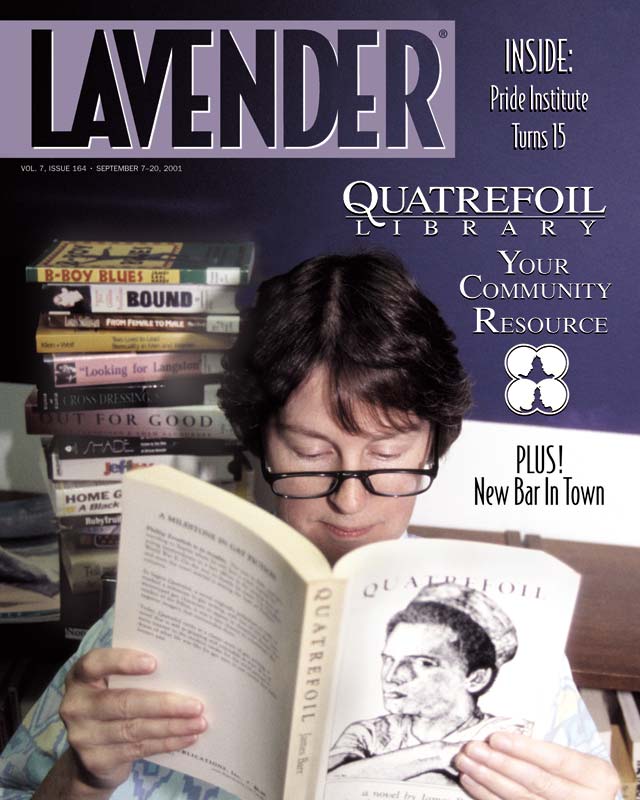 “Dick Hewetston and David Irwin had been gathering GLBT-related books during their 8-year relationship,” began Breyfogle. “On Sunday, September 11, 1983, at brunch with four of their friends, they brought up the idea of sharing their collection with the entire GLBT community, and Quatrefoil Library became official within one week.”

Named after James Barr’s 1950 novel, Quatrefoil is the story of a gay male relationship in the 1940s, one of the first books to portray homosexuals in a positive way.

“The Library officially opened to the public on February 4, 1986,” continued Breyfogle. “There were 16 Quatrefoil members before the doors ever opened, and the original collection had approximately 1,300 books and six periodical subscriptions.”

Today, the Quatrefoil Library has over 400 active members, and houses more than 15,000 GLBT-related books, newsletters, magazines, DVDs (including documentaries, television shows and mainstream movies), CDs, audio books, and full-text databases, with Wi-Fi and public internet access. Quatrefoil received a 2010 Arts and Cultural Heritage Grant from the state of Minnesota to preserve its extensive collection of unique magazines and newspapers.

Quatrefoil is now a 501C non-profit, governed by an elected board of directors.

Breyfogle noted that, “While the for the most part, our influence is local, the library is known worldwide for our uniqueness. Will Fellows, author of the recently-published book Gay Bar, used material from Quatrefoil to write his book. Will lives out of state, but a friend told him to consult the Quatrefoil Library, and we had the resources he needed.”

Breyfogle is justly proud of the solid volunteer foundation of the library, noting, “I think the library has some of the best and most dedicated volunteers around. Quatrefoil operates on a very small budget, and does not have a single paid position on staff. Our volunteers keep the doors open, from working desk shifts to serving on the board of directors to processing books and DVDs.”

The celebratory party, to be held October 16 at Open Book in Minneapolis will, said Breyfogle, “Recognize individuals who are no longer with us and honor those people currently doing outstanding work for the library. Plus, the event will be the official launch of the endowment campaign called An Eye on the Future with the goal of raising $300,000. We are expecting over 300 people.

“Our 25th year is turning out to be a memorable one for the library,” Breyfogle enthused. “We were recognized with a Pride Award, featured on the radio show Fresh Fruit and local access TV show, Bi Cities. Our fundraiser at Pride was incredible. We’re launching the endowment, to help with our next twenty-five years.”

“The Quatrefoil Library is the best kept secret in the Twin Cities GLBT Community,” concluded Breyfogle. “I invite your readers to check us out and become members.”