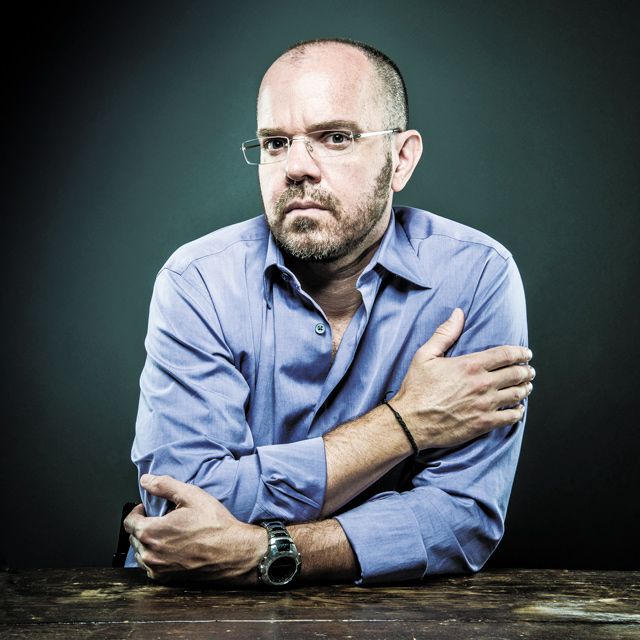 I recently interviewed Joseph D.R. OLeary, the creator, photographer, author and publisher of a new book called Of Beards and Men. The interview took place in OLeary’s office at his farm just outside the Twin Cities area of Minnesota.

What all do you do? You’re a photographer, you have your own design firm, you’ve got a farm—

I went to school for design. I always did photography on the side. I had my first camera when I was eight. I had a darkroom growing up, I was always interested in it. But I really liked design and focused on design for my schooling. I started Veto Design in January 1992, the year I graduated [from Minneapolis College of Art & Design]. I did photography here and there while I was living in Minneapolis. And then eight and a half years ago, when I moved here, I had the luxury of having a couple barns that I could remodel into a studio. And that’s when I got more serious about the photography—now I can dedicate a whole space to this, and keep things there, I don’t have to like shuffle things around as much.

The farm, at various points we had chickens, we had goats, we had different things. Right now we don’t have anything—except the dog.

Why beards? Why a book of photographs of men with beards?

Several reasons. I was doing a portfolio of women’s fashion because I wanted to get jobs in the fashion industry. And it wasn’t working very well. When I would contact somebody they’d be like, oh, your work is great, I’d love to work with you. Then they would find out that I lived out here, and they wouldn’t show up. I had probably a 50% show-up rate.

So that was one thing. Secondly, my brother died in a car crash in December of 2011, which kinda made me spiral out of control a little bit. This project was a way of connecting with people to tell their story, so that it’s documented in a book for, like, an eternity. Because I felt like my brother was taken from us too fast, and unexpectedly, so his story was never told in this way.

And then I got Lyme disease in 2012, which I had for six months to a year prior to when they discovered it. It was crippling, I was on crutches for five months during 2012 and nobody could figure out what was wrong with me. I was just trying to motivate myself to keep on going, keep moving forward, and this project just kinda came out of it. So it was a way of connecting with people, you know, trying not to drop out of society because I was sick and hurting from my brother’s death.

But why men with beards? You could have taken photographs of anybody or anything.

Well, I think because the women weren’t showing up, I thought, let’s change to men. And I felt beards were just—I would look at old books, like my partner has a book of some of his relatives. There’s 20 brothers in this photograph, these 20 brothers are standing in a V with Mom and Dad in the center, and every one of them had a beard or a mustache. And it was like, wow, there’s something so attractive about this, you know? My dad always had a beard the entire time I’ve been alive. Beards represent masculinity. It’s one physical difference between men and women, you know, men can grow beards.

How did you find guys to photograph?

I made postcards that said “Is your beard ready for its closeup?” and dropped them at various public places around town. I started putting it online on Facebook—you know, is there anybody out there with a beard who wants to get photographed? It was really slow at first because people weren’t sure what it was all about and, well, what is he gonna do with me while I’m at the studio? I had a couple people who said, well, I’m not into beard fetishes. And it’s like, well, it’s not a fetish, it’s just you have a beard and I’m making portraits of men with beards. Slowly, once people started seeing the photos, it was like, oh, I get it, and then it was easier to get people to come out here.

Tell me about the photographic style of the book.

When I first started the project, I handed out postcards at the Minnesota Beard-off in 2012. I showed up at First Avenue and I was handing out these cards, and before I even left the bar I already had people taking pictures of themselves and e-mailing their selfies to me. This was on Saturday night, and I think I had my first shoot on the following Wednesday. I photographed him, probably for a half-hour, and I was kind of uncomfortable because I didn’t really know what I was doing. The next guy came maybe a week later, and I photographed him. I had six or seven of them done at one point, and I was looking at them, thinking they don’t feel different enough or unique enough, there’s no style to them yet. I haven’t figured out what my voice is about this project. I wasn’t bringing anything new to this subject matter.

That’s when I photographed one guy with a pipe—he was number 6 or 7 or 8—and when he brought his pipe I was like, that’s it, I need people to bring something.

Yeah, I needed a prop, something that defined that person. So I asked them to bring a couple changes of clothes, and a prop or two that defined them professionally, personally or spiritually, and then just waited for them to show up. The first few guys that I photographed, I invited them back and I re-photographed them.

Sometimes it took a long time to get the right photo. My photo shoots, the first ones were about a half hour to 45 minutes. As the project went on, they got longer and longer and longer. I would say three and a half hours ended up being the shortest, and sometimes as much as five, six, seven hours. Because I was enjoying the conversation so much, I didn’t want to just take their photo and tell them to get out of here. I wanted to know these people, and I felt like I became friends with all the subjects that I spent a lot of time with. We had great conversations. There was times when I was crying because we were sharing stuff that was unbelievable! I felt like, in a way, these guys have all become my brothers. It was such a personal project to me.

Why did you use Kickstarter to create this book?

Originally my idea was that it would just be a print-on-demand book—I’ll take the photographs, I’ll design it, put it out on a website, let people buy it if they want. I photographed people, and I got to, like, 50, and the project kept evolving, and more and more people got excited about it. At one point I was doing three photo shoots a day. I finished photographing the hundredth guy much earlier than I expected. So I kept on photographing, because I was having so much fun. There was gonna be 100 people in the book, it ended up being 140. There were only supposed to be 168 pages in the book, it ended up being 212. I was gonna print in China to keep the expenses low, but I printed in Minnesota, which is a lot more expensive. There was only gonna be one version, there ended up being three. I kinda kept amping it up, because I was happier and happier with the photos, and people were more and more excited. The Kickstarter campaign had a goal of $27,000, I raised $40,000. So—I ran with it.

The Kickstarter project got a lot of press internationally. During the campaign I was contacted by people in Israel, Germany, Australia, New Zealand, England, the Netherlands. Everybody was writing articles about it, and it was featured on forty-some different websites. The Huffington Post covered it. It was amazing. It blew my mind. The day that I launched the Kickstarter campaign it was an instant Kickstarter staff pick. It become the most popular local pick for the Twin Cities.

What did you do yourself, and what did you outsource to various helpers?

I did everything from designing all the promotional materials for it, to designing the book, to taking the photographs, to writing all of my stuff in the book. I did have [art critic] George Slade write an essay, [photographer/educator] Doug Beasley wrote a critical essay, and Andy Sturdevant [an arts writer based in the Twin Cities]. [The book also includes a fourth essay by author and photo historian Vicki Goldberg.] Anastasia, a friend of mine, ended up editing the bios—I went through and did my first edit, and then gave them to her to edit them so that each biography was in the owner’s voice and said what they needed to say, but there’s a consistent style to them.

But, yeah, everything was my doing, essentially. I was at the printer from 10:00 on a Friday to noon on a Saturday, checking the pages as they were printed. When I was at the bindery the last two days before my book launch, I folded all the dust jackets.

You folded them personally yourself?

Personally myself. We were trying to get it done, and I knew I had a Saturday book launch and I needed to get as many books done as possible. And I shrink-wrapped a bunch of books, too.

Yeah. One benefit I think I had in overseeing everything was that I have twenty years of design under my belt, so I know the questions to ask. Every detail, I lived and breathed it.

Why was the book printed and bound in Minnesota instead of in China?

I had gotten a book from another photographer, and this book was so beautiful, I’m like, this is what I want mine to be. And in the back of the book it said “Printed in China.” And then another friend said, you really need to check out this other printer in Singapore. I knew it would cost a lot less to print in China or Singapore. But I really wanted it printed in the U.S., because I feel like everything’s getting sent to China. I won’t even shop at Wal-Mart, why would I send my book to China to be printed, even though I loved the printing that China was doing?

And then as I was talking to a lot of the guys in the book when I was photographing them, they were like, don’t print it in China. This is a book about these men, and it all feels local and regional, so keep it local. People are gonna be upset if you print it in China.

Are you pleased with the way things have turned out?

I’m blown away by how well Kickstarter worked. I’m actually super-pleased about the whole project. I was able to have complete control over a creative project from the get go, with nobody telling me what to do, and see where it goes—to see if I can make the right decisions all along the way. And in general, I feel like I have, I don’t think I made too many errors. I just wanted it to be completely my own decision. It’s a little nerve-wracking, but I think it’s fun, too.

The project has been getting a lot of gallery representation. It was in New Hampshire [Drift Contemporary Arts Gallery, Portsmouth], Florida at the Morean Arts Center [St. Petersburg], the Kiernan Gallery in Virginia [Lexington], and the Netherlands [Galerie Mooiman, Groningen]. It was in the Center Forward exhibition at The Center for Fine Art Photography [Fort Collins, Colorado].