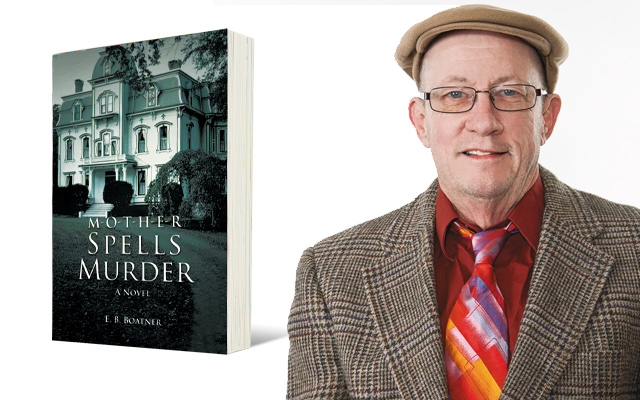 Lavender columnist E.B. Boatner has added another accomplishment to his long list of achievements with the recent publication of his first novel, M-O-T-H-E-R Spells Murder, a mystery novel that explores the devastating effects of scandal in a Southern family severed by secrets and greed.

Introverted Gwendolyn thought the drama in her life would be over when she moved out of her Southern community into an elegant home in Boston. Filling the house to the brim with books, she enjoyed a calm and contented life until her mother, Elinor, moves from Atlanta to be closer to Gwendolyn after the death of Gwendolyn’s father. Then Elinor is found brutally murdered in her nursing home with no clues left behind as to who could have committed the ghastly murder–or why.

Then Monica, the former mistress of her father, suddenly appears in town with her sickly son, Eric. When tragedy befalls the unexpected visitors, Gwendolyn quickly turns to her parents’ sordid pasts to catch the murderer before she becomes his next victim. What she finds is an abysmal, manipulative relationship held together by lies and the desire to “keep up appearances” with Atlanta society. But most importantly, Gwendolyn must piece her fragmented memories together with the strange, cryptic letters between her mother and a mysterious man in order to save her own life. With the help of Thibodeau, an attractive detective who becomes a welcome addition in Gwendolyn’s life, she attempts to uncover her parents’ secret lives before it’s too late.

Woven throughout Gwendolyn’s search for the truth are the memories of Carroll Goslin, a man whose unrequited love for a young writer still burns obsessively regardless of the relationship’s abusive and impossible nature. Descending into Carroll’s psyche reveals his dark passions and the emotional and psychological scars he acquired under the demeaning and emasculating manipulation of his mother. Despite desperate attempts to break free from his mother’s possessive behaviors, the damage he has suffered leads him to one unspeakable act after another.

In addition to an intriguing plot that requires the reader to constantly question the motives of the characters, Boatner has given life to a vibrant cast of characters that could very well be people one meets at a cocktail party. Even Elinor, who is never even alive throughout the plot of the novel, has a bold and brazen personality that demands the attention of the reader. Boatner constructs each character with minute details, down to the tough-yet-maternal behaviors of Pat Henley, the policewoman assigned to protect Gwendolyn. When asked whether his characters were based off people in his own life, Boatner notes, “If you’ve been raised as an only child in a dysfunctional Southern family, you don’t need to go further than the dining room table to find characters–sometimes several in the same person.”

Boatner creates a rich history between Elinor and her murder through Gwendolyn’s discovery of her mother’s coded correspondence with a former lover. This secondary plot, thick with the agony of a twisted romance, is well-developed and captivating–sometimes even more so than the primary focus on Gwendolyn’s present situation. Boatner doesn’t simply rely on the quality of the main plot to carry the novel; his careful and thoughtful construction of Elinor’s backstory strengthens the story and adds an additional dimension to the classic “whodunit” mystery.

The power dynamics between the characters were also impressively portrayed (much to the delight of my liberal arts-educated mind that is trained to spot the impact of power and privilege in everyday life and its artistic replications).  Boatner’s male characters are so often oppressed and controlled by the female characters that I find it hard to identify a single empowered male character in the novel. Carroll’s oppressive mother literally continues to control him from her grave, and his brief affair with independence ends abruptly when he replaces his mother with a domineering lover who continues to keep him under the heel of her fashionable shoes. Eric, the son of Gwendolyn’s father’s mistress, is under his mother’s constant scrutiny and experiences such a lack of freedom and independence that he simply cannot function on his own. Only when he is forced to protect himself from his untimely demise does he finally acquire a sense of manhood. Boatner effectively places the traditional “feminine” stereotypes of weakness, fear, and dependence on the men of this novel, and he enhances the traditional “masculine” stereotypes of domination, strength, and independence in his female characters (a move that makes us examine how our construction of gender affects our perception of people).  The result is a fabulous experience of subverted gender roles within a work of entertaining fiction.

What makes this mystery novel quite extraordinary is Boatner’s ability to capture Carroll’s increasingly obsessive behavior and his need to control the fates of those who have wronged him. Through the examination of his memories, one becomes sympathetic with Carroll’s weaknesses and understands his behavior as the culmination of years of emotional and psychological abuse. I found myself taking my sympathy one step further: maybe the true villains are not the people who commit acts of murder, but rather are the ones who slowly kill the souls of others with their selfishness, manipulation, and constant abuse. Boatner’s novel demands that we examine the impact society has on the individual and how our own actions affect those around us.

M-O-T-H-E-R Spells Murder  is not simply a mystery novel; its strong detail and Boatner’s ability to reflect current struggles in our society sets it apart from the racks of repetitive mystery novels that lack the introspective voice of Boatner. Without a doubt, E. B. Boatner’s first novel is a milestone for what will hopefully be a continually fruitful writing career.

Magers and Quinn Booksellers will be hosting a launch party for M-O-T-H-E-R Spells Murder on Wednesday, February 13, at 7:30 pm. E.B. Boatner will read from his novel and be available afterward for questions and conversation. For more information, visit www.magersandquinn.com or www.ebboatner.com.