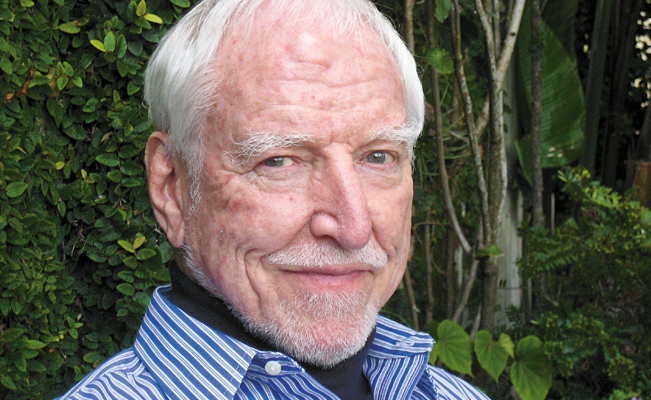 The core of James C. Hormel’s memoir, Fit to Serve, is the book’s subtitle: Reflections of a Secret Life, Private Struggle, and Public Battle to Become the First Openly Gay U.S. Ambassador. Born in 1933 in Austin, Minnesota, Hormel grew up surrounded by wealth from the family’s meatpacking industry–SPAM the apex of its empire. It was a time when homosexuality was not mentioned, when innumerable young men and women, Hormel included, agonized and hid their private selves. Hormel relates how he overcame private and public obstacles to enter public life and serve his state and country in Fit to Serve. Hormel recently spoke via e-mail with Lavender, discussing aspects of varied and vivid life.

You grew up in a loving and wealthy family, yet knew you were “different.” Much of your early turmoil, including failing out of Princeton, had to do with not recognizing or accepting–or being able to publicly express–who you really are. How important is it for us all–when it is possible–to be out and proclaim our “otherness,” G, L, B, or T?

Without question, coming out is the single most important thing an LGBT person can do for himself or herself. It lets people know who we really are, and it helps them see that we are part of them, not apart from them. As I say in my book, we would not have made progress on LGBT rights were it not for the thousands of people across the country, in big cities and small towns, who had the courage to be out. And we won’t truly have all our rights until all of us are out.

You were involved in the Civil Rights movement in the 1960s – is it fair or unfair to make a comparison between that movement, which also involved issues of job and housing discrimination and marriage strictures, and the work going on now to have equal rights for all citizens regardless of race, sex, gender or sexual orientation?

At their hearts, both movements were/are about rights and equality, and the desires of a group of people to be judged as individuals, and not by any particular circumstance of race or sexual orientation. Nevertheless, we need to be cautious about the comparisons. The terrible history of slavery is very different from the LGBT history of secrecy and denial.

You recount an episode in May, 1970, when you and your brother, Thomas, were in Bangkok, of having an adverse reaction to a friendly young American GI, thinking, “Why are you taking part in the massacres in Vietnam?” then almost immediately feeling ashamed, realizing, “I did not see him as an individual, or acknowledge the humanity in him.” Would you say this same failure or refusal to see is a barrier to accepting GLBT folks now?

I included this anecdote in the book to make a point about how easy it is for all of us, any of us, to judge another individual on the basis of something external, or some assumption we make about them, rather than seeing them for who they really are. It’s not easy to control those assumptions, but anytime we make an effort to approach someone with an open heart, and make a genuine effort to accept them, we also do something wonderful for ourselves.

A “problem” arose after you donated funds in 1991 to create what became the James C. Hormel Gay and Lesbian Center of the San Francisco Public Library. Opponents called you a “pedophile,” and ignored the fact that not only did you not personally choose the contents, but that many of the materials reside also in the Library of Congress. How does one–can one–anticipate or combat the opposition’s use of blatant untruth and slander?

This was a major strategic issue in my ambassadorial fight: should we publicly fight slander allegations, or would that only succeed in giving more life to the allegations and more credibility to those who leveled them? In general, it’s very important to get the facts in circulation as quickly as possible, but on occasion it’s better to let these stories die a natural death. I often wonder if Fred Phelps and his so-called church would go away if no media ever covered them.

In 1997, after you’d served on two separate delegations to the United Nations, President Clinton nominated you to be Ambassador to Luxembourg. The confirmation process was lengthy and heated, several Senators in particular working to prevent your confirmation from coming to the floor for a vote. Finally, in 1999, Clinton appointed you to the post. Would you comment on the part your homosexuality rather than your fitness to serve played in the whole lengthy process?

The title of the book, Fit to Serve, tells the story: I was judged purely on the basis of my sexuality and not on the merits of my experience or skills. Those who opposed my nomination never raised questions about my qualifications.

You became the country’s first openly gay Ambassador in 1999. Why was obtaining an ambassadorial post so important to you?

I knew that once I broke the “pink ceiling,” it would be that much easier for other LGBT leaders to serve at the highest levels of government. In fact, there have been two openly gay ambassadors since I served, both of whom enjoyed a noncontroversial process–including Senate confirmation.

Upon arrival at your post in Luxembourg, you discovered that your sexuality was far more “ho-hum” for Luxembourgers than for politicians at home. How would you describe that reality gap?

Many European nations have had an easier time seeing that sexuality is not a basis for denying rights, a view that is reflected in laws that permit same-sex marriage, among other things. Almost across the board, the people with whom I interacted in Luxembourg, and those in government particularly, went out of their way to make me feel accepted. Without saying it directly, they let me know that my sexuality was of no relevance to the conduct of my duties.

You mention the Mormon Church’s part in preventing Hawaii from allowing same-sex marriage in 1998, and you start the book with Pat Robertson’s broadcast of lies about you. Given just these two specific illustrations, what tactics do you think opponents should use to counter proponents of the gay marriage ban amendment coming up on the ballot in Minnesota in 2012?

I would say three things: First, Minnesotans should brace themselves for an onslaught of non-Minnesotans who will contribute vast sums of money and do anything possible to see that the ban is passed. Second, they should keep telling the personal stories of the LGBT people whose lives and families have been made whole by being able to be married. Finally, they should draw on the experiences of people in Iowa and Massachusetts to show that the sky has not fallen since same-sex marriage became legal in those states–life goes on there, pretty much as it did before, except that now a whole new group of people are able to be committed in stable, family-friendly relationships.

Would you comment on Secretary of State Hillary Clinton’s recent comment that “Gay rights and human rights are one and the same”? Do you think that Obama’s strong stance on GLBT issues can affect other countries–this country?

Secretary Clinton’s comments were change-making. They should be recognized as something truly extraordinary. Whether her speech will translate into concrete foreign policy measures remains to be seen, but her statement, in such a significant global forum as the UN Human Rights Council, shows that President Obama is taking a leadership position on issues of acceptance and equality. This sort of candid and persuasive statement from the US government will inevitably influence countries in both the northern and southern hemispheres.

Do you feel it is even possible, by coming out, writing, holding an ambassadorial or other public position in sports or politics or the media, to become “humanized” as a GLBT individual to the far right or entrenched fundamentalists? Will their eyes ever be opened or will it take legislation like the Supreme Court’s 1967 Loving vs. Virginia ruling, to win equal rights in sexual and gender equality in this country?

Whether it’s me or Ellen DeGeneres or a lesbian Navy officer, returning from sea, being photographed with her wife, a gay person who stands up helps open eyes and soften a few of those hard hearts. But there is a difference between “tolerance” and “acceptance”, and it may take more court rulings until we are accepted as equal citizens under the law.

You’ve called DOMA “Heinous to Civil Rights” – how close are we, if at all, to its repeal?

DOMA will inevitably collapse under its own weight–it is patently unconstitutional. The question is how long that will take but I’m optimistic, and–at age 79–eager to see its repeal.

A note of gratitude to those who supported my nomination, and to those who are fighting now for the LGBT constituency. They are all part of the historic change in the making.