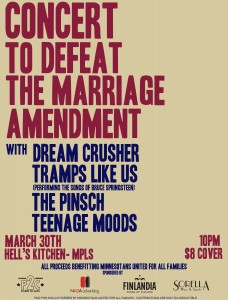 On March 30th local musicians will hold the “Concert to Defeat the Marriage Amendment,” to raise money and awareness towards defeating this discriminatory amendment. Organizer Andrew LaValle, former host of Radio K’s local music program, Off The Record, praised Downtown Minneapolis’s Hell’s Kitchen explaining, “We’re having the event at Hell’s Kitchen because they are so accommodating and supportive–they are essentially giving us the space for free and allowing us to keep all of the door charge,” proceeds that will benefit Minnesotans United For All Families, the chief organization leading the push back against the proposed same-sex marriage ban ( www.mnunited.org )

Headlining the evening’s performance is Dream Crusher, the sprawling improvisational project featuring members of Me and My Arrow, Fort Wilson Riot, Yer Cronies, and others. The band has a large, rotating cast of local music mainstays, and was named one of First Avenue’s “Best New Bands” in 2011.

There wlll be a special performance by Tramps Like Us, a Bruce Springsteen cover band featuring members of Gospel Gossip. Also playing are Teenage Moods and The Pinsch, a newer female-fronted group with members from Short Fuses, Divebomb Honey, & The Deaf.

“The response from bands & artists was really great,” said LaValle. “It’s a busy time for most of them because of the SXSW festival in Texas and many are on tour, but I was already acquaintances with many of the bands on the bill because of the work I did hosting Radio K’s local music program for four years. All the bands participating are fabulous. Many more wanted to take part, so we’ll have to get more of them involved in future events.”

LaValle urged others to participate: “I encourage anyone who is interested to hold their own events as well. It’s important stuff.”