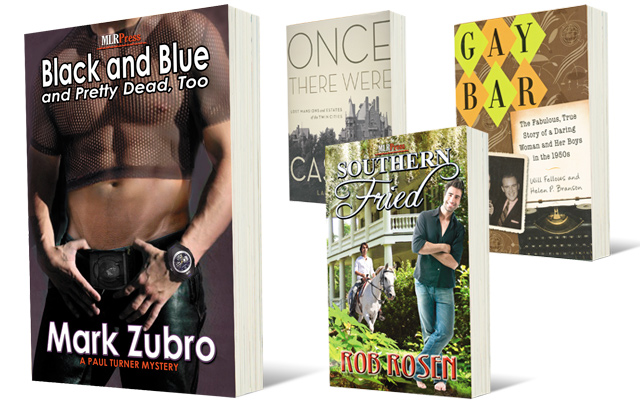 Black and Blue is the tenth book in the author’s Paul Turner series, which includes Nerds Who Kill and Hook Line, and Homicide. Turner is a gay Chicago detective and father of two sons who, in this outing, is assigned with his partner Buck Fenwick to solve the murder of a fellow cop found dead at an underground leather festival. The investigation becomes mired in a morass of police corruption and cover-ups, involving top brass and A-list leather queens, and death of a teenager. Zubro has a feel for menace, conveying the grime and grittiness of subjects and surroundings–as well as Turner’s gayness–to great effect. Also check out his Tom & Scott mysteries (Everyone’s Dead but Us, etc.)

Trip Jackson returns from the Big Apple after his wealthy grandmother’s death to find himself enmeshed in the tangle of his Southern, dysfunctional family. Why had grandmother sent him into Yankee exile as a youngster after the death of his parents in a car crash then kept him at arm’s length for years? Enmeshing also involves a steamy relationship with the plantation’s stable boy Zeb, and the appearance of a mysterious stranger. Stir in intrigue, murder, and housekeeper Pearl, who whips up fried chicken and pies so rich you can taste them. What I’m saying is, The Brothers K it’s not, but Southern Fried goes down easy whether on a beach blanket or under a robe by a crackling fire.

Gay Bar: The Fabulous, True Story of a Daring Woman and Her Boys in the 1950s
Will Fellows and Helen P. Branson
University of Wisconsin Press
$26.95

Fellows, acclaimed author of Farm Boys and A Passion to Preserve, here explores an earlier work, a time capsule if you will, by a no-nonsense straight woman, Helen P. Branson. Owner and operator of a Los Angeles gay bar in the homophobic 1950s, at a time when California statutes forbade homosexuals even to gather in bars, Branson first published her memoir, Gay Bar, in 1957. To this original work, Fellows has now interleaved chapters commenting on those times, their legal, psychiatric- mores, and added his own comments to letters and publications of the period. Branson’s words and actions paint her as a humane, hard-nosed woman, a divorced grandmother who watched over and treated “her boys” with humor, love, strictness, and respect.

Once There Were Castles: Lost Mansions and Estates of the Twin Cities
Larry Millett
University of Minnesota Press
$39.95

Millett quotes a letter in the Minneapolis Tribune who in 1922 warned, “A certain penalty is attached to progress in that the city must hereby sacrifice a good deal of its poetry–for its poetry, to a large extent, lies in its old residences.” Millett himself writes poetically about these grand old structures and the wealthy and eccentric who built them. At least 500 lost mansions and estates can be traced through records, which eventually succumbed to expansion, financial disasters and high maintenance. Millett examines 90 of these lost treasures, tracing with the equally fantastic and grandiose stories of their inhabitants with mesmerizing photographs and drawings. The book may well be read as a parable of our own parlous times.