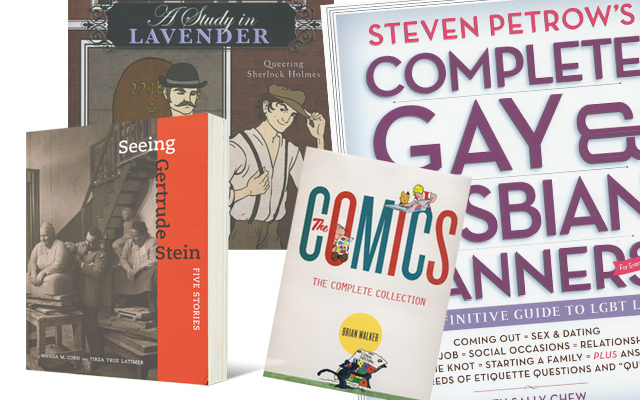 Most think of Stein as a wordsmith, and have some knowledge of her broad collection of artists of the day, but Five Stories, a companion to the exhibit of the same name currently running at the Contemporary Jewish Museum in San Francisco, explores the visual Stein. She kept photos and artifacts from childhood on, and was acutely aware of herself as she was posed for photographs, paintings, and sculptures by outstanding artists of the day, from Picasso to George Platt Lynes. Stein asserted, “A writer should write with his eyes, and a painter paint with his ears. Five topics, “Picturing Gertrude,” “Domestic Stein,” “Art of Friendship,” “Celebrity Stein,” and “Legacies,” each containing 4-8 essays, help the reader see beyond the type.

Over the years many writers have tried their hands at enlarging the Sherlock Holmes canon with their own works, Laurie R. King’s Mary Russell series is just one example. Lavender offers 11 niftily crafted and nuanced stories involving Holmes and the faithful Watson – sometimes clueless concerning his companion’s predilections, sometimes himself yearning for the master. Vincent Kovar’s The Bride and the Bachelors offers an almost O’Henry twist in its surprising solution, while Ruth Sims’s Whom God Destroys is told from the point of view of a serial killer who deems “Old Jack”–the Ripper–“overrated.” Editor DeMarco’s The Adventure of the Movie Never Made posits a fifteenth Holmes film with Basil Rathbone, Nigel Bruce, Mary Gordon–and a homicidal child actor.

Citing statesman-philosopher Edmund Burke’s “Manners are of more importance than laws. Upon them, in great measure, the laws depend,” author Petrow covers every conceivable social situation that one might encounter as a gay person, as a non-gay person dealing with gays–with your bartender, your coat-check person and parking attendant. The Fleur de Lys Goblet Napkin Fold? Page 277. Invited to be a sperm donor? Page 204. Addressing Invitations to Lesbian and Gay Couples? Page 261. Serious Illness? Page 352. In short, you hold in your hands some 400+ pages of “The Definitive Guide to LGBT Life,” all sharply observed and candidly expressed. If something has been left unanswered, or you have a personal question, Petrow himself awaits at GayManners.com

This handsome volume combines Walker’s previous The Comics: Before 1945 and The Comics: Since 1945 comprising 672 pages and some 1,300 images. Walker knows the comics thoroughly, as cartoonist, scholar, and founder and former director of the Museum of Cartoon Art. Following in his father Mort’s footsteps, Walker continues as part of the team producing the Beetle Bailey and Hi and Lois strips. Of course, all the big guns are represented, George Herriman’s Krazy Kat, Walt Kelly’s Pogo, Scott Adams’s Dilbert, Al Capp’s Li’l Abner, with many new strips like Rick Kirkman & Jerry Scott’s accurately titled Baby Blues, Jerry Scott and Jim Borgman’s wry Zits, and Ray Billingsly’s politically cutting Curtis, all enhanced by Walker’s well-researched and analytical text.