Beyond the Poison Years 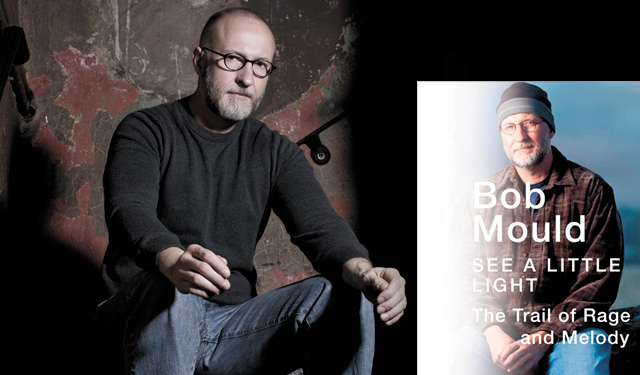 Bob Mould digs deep into self in new book

Over a career that spans three decades, multiple bands and a multitude of classic songs, Bob Mould has usually let his music do the talking. In interviews, he’s always come off as thoughtful, cautious and intelligent, but he’s kept the whole story of his music, career, and life under wraps. He opens up in See a Little Light, his autobiography (co-written with top music scribe Michael Azerrad), where he not only looks at his years in the music business, but discusses growing up gay in rural New York, his string of long-term relationships, and the emotional demons that have haunted him through his life.

Mould travels chronologically, starting with his early life in Malone, New York. The small-town-life was far from idyllic, especially with his abusive, alcoholic father. As is often the case, those early years laid the foundation for Mould’s later problems with substance abuse and understanding his own emotions. From there, Mould went off for an almost clichéd 1970s upbringing, drinking a lot of beer and listening to hard rock on the radio. His love of music ran deeper than most, however, and his skills as a guitar player showed up very early. Once he discovered the early punk rock sound, Mould was hooked.

The first half of the book traces the rapid rise and fall of Hüsker Dü, the seminal band Mould led with co-singer-songwriter Grant Hart. There’s plenty of good, nerdy details about gear and recording classic albums like Zen Arcade, along with stories from the road. Mould also examines his own trust issues and lays some of the blame for the band’s disunion at his feet, though he puts most of it at the feet of Hart’s drug use.

He also looks at his growing sexuality, describing the emotions and turmoil of his first boyfriends in the relatively liberated Twin Cities of Minnesota, and how the same issues that helped to short-circuit Hüsker Dü were in play at home. The relationship issues continue through the book’s second half, as Mould works his way through 25 years of his solo career, including the highs of Sugar, his stint as a writer for World Championship Wrestling (he really is a man after my own heart) and the slow process of improving himself in life and love. He eventually finds comfort in the bear community, where he doesn’t have to hide the real “Bob.”

As someone who has followed Mould’s career as far back as the glory days of Hüsker Dü (probably the very first hardcore punk rock I ever heard was when KQRS – yes,really – played a few cuts from Everything Falls Apart on their late-night local music program), the insights into his music are intriguing, but sometimes the discussions about guitar tone and the pickups he employed are a bit too nerdy even for me. I get a sense that, even after all these years, Mould is still uncomfortable talking directly about his personal life and relishes the chance to retreat back to the music.

Still, the book proceeds with crystal-clear, punk-rock honesty. Mould has barely spoken a word to the other two members of Hüsker Dü in the past quarter century, and it doesn’t sound like he’ll be calling up Grant Hart or Greg Norton anytime soon. He admits that some of the records he released over the years, such as the swansongs for Hüsker Dü (Warehouse: Songs and Stories) and Sugar (File Under: Easy Listening) were weak, and lays part of the blame at his own feet.

In the end, it is the personal stories that stick in the mind, of building home after home in a search for happiness that won’t come until the writer is as honest with his private life as he is in his songs. That transformation is remarkable, and sheds light on the late career renaissance Mould has enjoyed. Once he was at last comfortable with himself, the music began to flow once again.