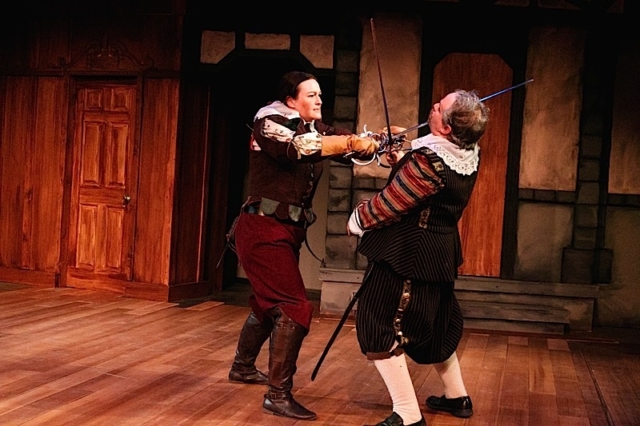 Director Joseph Papke has an exceptional gift for sharply examining centuries-old scripts and making them understandable in performance on their own terms for today’s general audience. Moreover, Papke doesn’t alter them. That’s because he trusts, hence respects, the audience. This gift is in clear evidence in Classical Actors Ensemble’s revival of the Jacobean era comedy, The Roaring Girl, at Gremlin Theatre. Four centuries later, it still makes extraordinary impact as an inquiry into crossing the boundaries of gender identity.

The conventional and ahistorical view of some today is that crossgender and transgender realities did not surface, nor were allowed to surface, until relatively recently. However, co-playwrights Thomas Middleton and Thomas Dekker proved otherwise as they crafted this masterpiece with penetrating insights and acute awareness. With The Roaring Girl, they added brilliantly to the groundbreaking movement of many popular crossgender stage representations of that time. Their contemporary, William Shakespeare, is the figure most of us are familiar with who also fueled this movement. 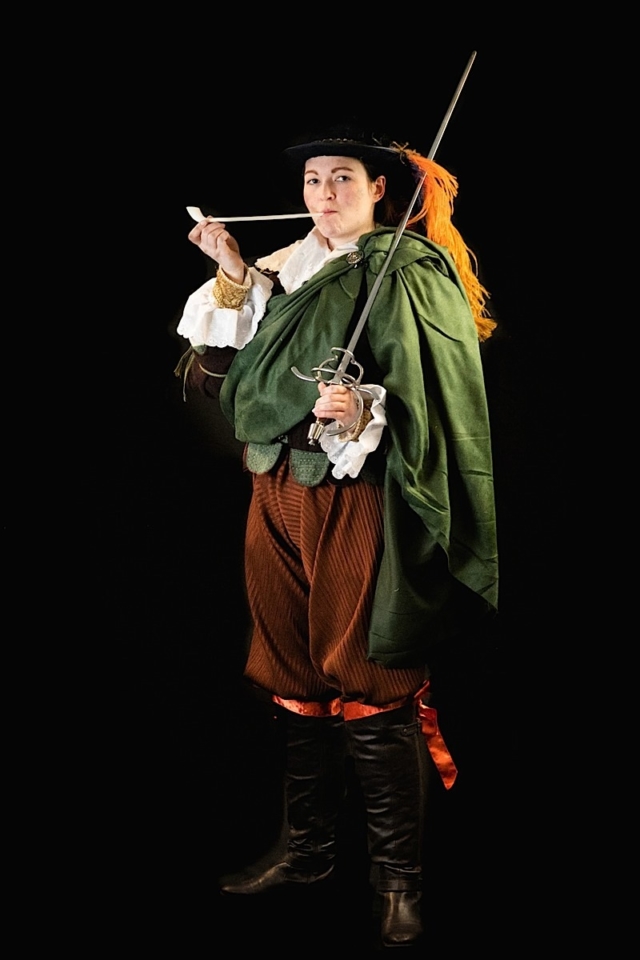 The Roaring Girl’s protagonist is Moll Cutpurse (a magnificently gritty Meredith Kind), a woman who wears male attire in her daily life. She speaks and moves with what is generally perceived as a masculine mien. The character is streetwise, although certainly not in the sense as a streetwalker sex worker. To point: the slang term “roaring boy” was applied to younger men who brawled, stole, gambled, and had a good time drinking and kidding around. Middleton and Dekker reversed the gender modified by the term but applied the same “roaring” qualities to the title role. Their Moll is said to have been based on the real life Mary Frith.

The multifaceted storyline is generated by an intergenerational conflict between a noble father and his son. Haughty Sir Alexander Wengrave (Randall J. Funk) is opposed to son Sebastian’s choice for marriage. Therefore, young Sebastian Wengrave (Avi Aharoni) tricks his father into thinking that the older Moll is the woman he wants to wed, rather than Mary (a fittingly delicate Madeleine Farley), the maiden he actually loves. Out of this, comedy unravels onto the streets themselves. Funk and Aharoni crackle as the play escalates and they capture the very essence of what was a standard central conflict between fathers and sons in centuries past and across cultures. This pair creates a visceral window into that dynamic—a dynamic which to this day still lives on within particular families.

Kind embodies a ruggedly detailed urban masculinity that takes on any man as her physical and mental equal. This comedy, so vibrantly observant of London city social levels of the time, has been shaped into a production that utterly glistens with a kaleidoscope of robust and eccentric performances. Papke’s terrific acting ensemble, dressed in exquisite period detail by costume designers Lolly Foy and Marco T. Magno, transport us to the rough and tumble world of mercenaries, dandies and louts who deceive, peddlers with descending levels of virtue, and sexual hypocrisy. Dietrich Poppen’s set reflects the early 17th century look nicely.

As with all CAE productions, live contemporary popular music accompanies live vocals at points throughout, though the English Renaissance era itself is played faithfully. With The Roaring Girl this choice works much better than it has in some previous productions. 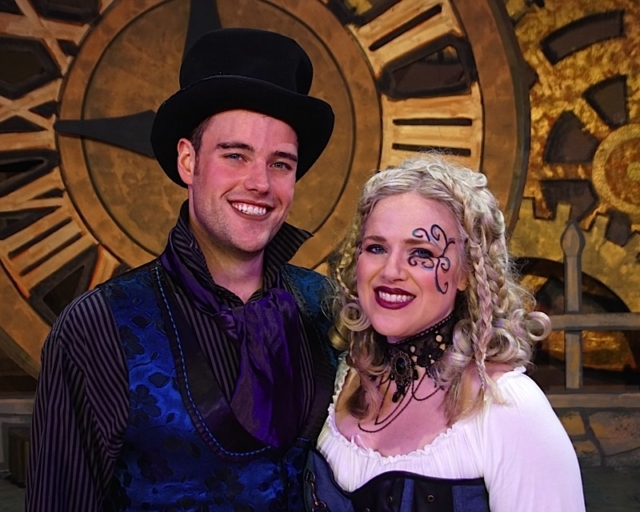 At the Howard Conn Fine Arts Center, the Gilbert & Sullivan Very Light Opera Company sallies forth three centuries from the English Renaissance to the Victorian Era and another crossgender dimension in the exuberantly realized Princess Ida or, Castle Adamant. When three young men disguise themselves as women in order to infiltrate an all women’s academic space, values and assumptions of both genders are unmoored in ways that still speak with acute relevancy to the present day. The influence of fathers on their offspring and vice versa are also major components. 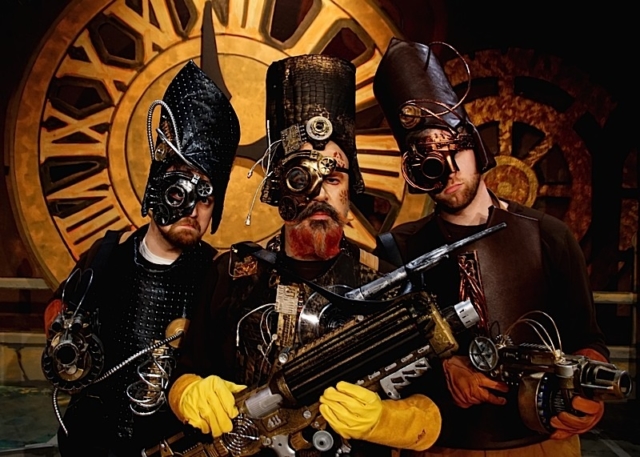 Gilbert and Sullivan’s eighth mutually conceived operetta, first produced in 1884, has been staged with a steampunk concept that reflects Victorian era motifs based on industrialized steam energy. French writer Jules Verne, popular to this very day, was an exponent of the aesthetic. It was the “high-tech” of the time. Moreover, the concept suits Princess Ida ideally in a parallel way because of the pioneering gender views it put forth during the reign of England’s very conservative female monarch. The piece is based on Alfred Lord Tennyson’s poem, The Princess (1847).  Larry Rostad’s set, Barb Portinga’s costumes, and Katie Phillips’s props reflect the style marvelously. 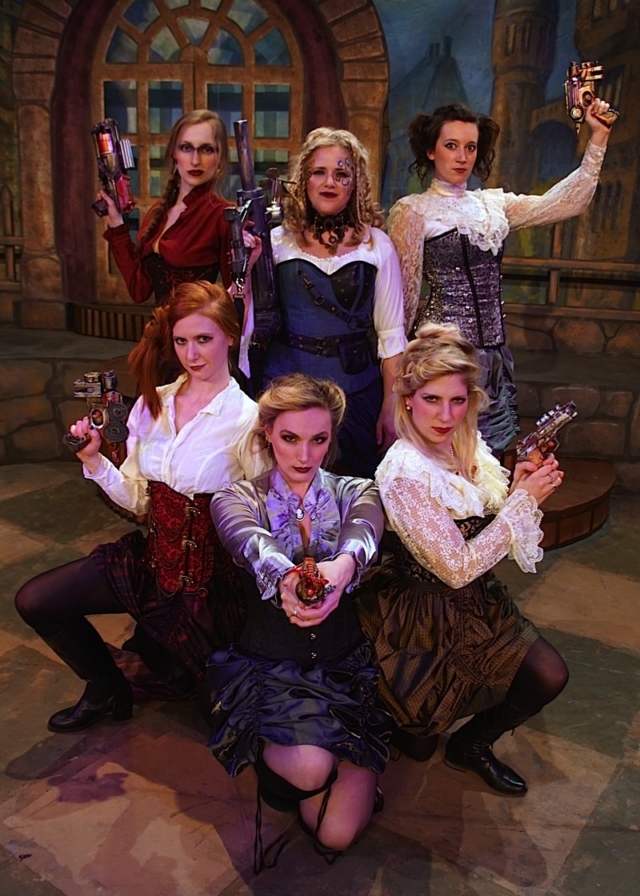 In turn, under Joe Andrews’s powerfully focused direction and Randal A. Buikema’s impeccable music direction, a large ensemble plays aristocrats, male soldiers, and female academic figures, to splendid effect both vocally and embodiment of period style. The night I attended, Claudia Finsaas sang the Ida role with a stirring sense of overall strength as a woman who challenges overbearing patriarchal expectations of how things should be run. Anthony Rohr charms as Hilarion, the young man who adores Ida. Deb Haas is absolutely and fabulously funny as Lady Blanche, the overly intellectualizing Professor of Abstract Science, whose observations and conclusions comprise some of the cleverest dialogue of 19th century British theater.